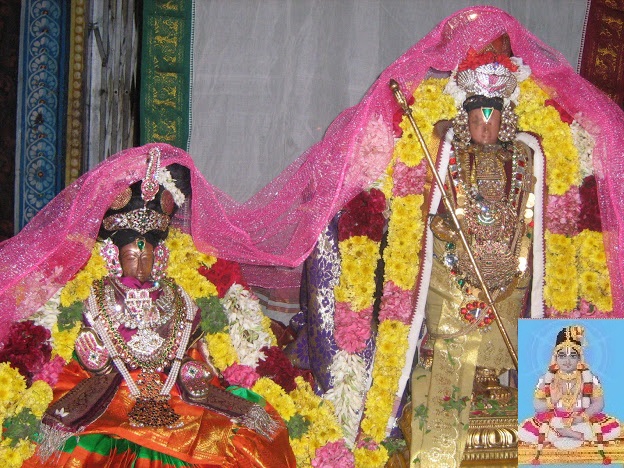 In the tenth decad, AzhwAr cried out due to the urge in attaining emperumAn; seeing that ISvara manifested his easily approachable presence in thirukkaNNapuram in archAvathAra form and pacified his urge; being satisfied with that, AzhwAr highlighted the following aspects of emperumAn:

Meditating upon these, and meditating upon how such emperumAn is mercifully standing as the recipient of kainkaryams and to accept the servitude, in the divine abode [of thirukkaNNapuram] where he can be approached, being very blissful, AzhwAr says “Being a bhaktha (devotee), a prapanna (surrendered person), through words (reciting his names etc), approach him, enjoy him, serve his divine feet and live with your sorrows of bondage being removed” and concludes highlighting his being the goal due to being the recipient of kinchithkAram (even a little bit of service).

In thiruvAimozhi 9.8 “aRukkum vinai“, AzhwAr greatly desired to attain emperumAn; since he did not attain emperumAn while he desired, he became very anguished and that was explained in thiruvAimozhi 9.9 “malligai kamazh thenRal“; that was anguish in the night. Seeing his suffering due to not having his desire fulfilled, ISvara pacified AzhwAr by saying “Should you desire for me and then feel anguished for not attaining me? Am I not the one who is desiring to attain you? Am I not the one who is anguished due to not having attained you? Do you have any shortcoming? Did I not arrive and have my presence in thirukkaNNapuram specifically for you while the assembly in the unshakeable paramapadham is in tact? I will fulfil your desire at the end of your present body” AzhwAr being pacified, becomes blissful; emperumAn’s nature/form is such that when he says “I will do something”, we will feel as if we have already attained it and become blissful.

In this manner, AzhwAr being blissful started instructing others saying “When this is his nature, sarvESvaran, being approachable by all, manifested his presence in thirukkaNNapuram; do bhakthi (devotion) at his divine feet; those who are unable to do bhakthi, do prapaththi (surrender); even if you don’t have full faith in such surrender, at least do it in speech; he will accept that and not abandon you; hence, everyone approach him”. Other than while being unconscious, AzhwAr cannot stop himself from giving good advice to others when he is conscious.

When asked “ISvara saying ‘at the end of this body, your desire [of ascending to paramapadham] will be fulfilled’ and AzhwAr becoming blissful does not make sense; is it not said in vEdhAntham that one gets liberated after one’s prArabdha (accumulated karma which has started yielding results) karma is exhausted?” – in this decad, AzhwAr says “do bhakthi” and “those who cannot do bhakthi, do prapaththi”. There [in vEdhAntha], it talks about the qualified person, upAsaka [bhakthi yOga follower]. Here [in this decad], AzhwAr is talking about prapanna [surrendered person]; this principle is explained in chAndhOgya upanishath “thasya thAvadhEva chiram yAvanna vimOkshyE athasampathsyE” (After acquiring desire to be liberated, I am waiting for a very long time). When asked “Isn’t this phrase in Sruthi (vEdham) analysed ‘whether it is talking about SarIrAvasAnam (end of the body) or karmAvasAnam (end of karma)’ and determined in our sidhdhAntham (philosophy) that it is speaking about karmAvasAnam? Will this (emperumAn giving mOksham to AzhwAr at the end of this body) not be contrary to that principle?” – only when a phrase is looked at contextually, it can be understood; for an upAsaka, since his results will fructify only after his means reach its ultimate state, in his case, he will be here until the end of karma; but, a prapanna, right in the beginning says “You are responsible for all my burdens” and performs bharanyAsam (placing his burden) on sarvESvara; [hence] there is no reason for [further] delay as in “there is something for him to still accomplish to bring his practice to the ultimate state, to have the results attained”! And ISvara to whom the individual has performed bharanyAsam, is not incapable and hence that is not a reason for the delay. Hence, as per these logic, there is no contradiction in such prapanna getting the result at the end of the present body.

Now, it is said that mAdhavi attained liberation as soon as she surrendered in gAruda purANam, SrIranga mAhAthmyam chapter 3 “bhagavatham prapannA sA bhagavantham avApasA” (she surrendered to bhagavAn; she reached him). In mudhgala upAkyAna (mudhgala’s incident), it is said that “those who were experiencing the results of their sin in naraka (hell) subsequently attained liberation, having heard the names of bhagavAn”; it is also said in SrI bhagavath gIthA 4.9 “one who has knowledge about the confidential aspects of emperumAn’s incarnations, will be liberated at the end of present life”; “thyakthvA dhEham punar janma naithi” (he does not acquire another birth, after the present body); it is also said in SrI bhagavath gIthA 18.66 “sarva pApEbhyO mOkshayishyAmi” (I will liberate you from all of your sins).

Should one not attain bhagavAn as soon as one performs surrender? Doesn’t one pray ‘you should eliminate this hurdle [body] and give me your divine feet’ [as nammAzhwAr prayed in thiruviruththam 1]? Even after this, if one remains with the material body which is not pleasing to him, is it because of remaining karma or is it because of ISvara placing him in such situation? If ISvara is placing a prapanna in such situation, then he will be blamed of some faults [that is, he is watching a prapanna suffer, hence he is being cruel, and so on]; it will also contradict his own words where he said that he will sever our hurdles and will carry us towards him; hence, isn’t it clear that he is remaining here due to his karma, and experiencing joy and sorrow just as any bound soul will experience? If there is still some karma remaining, why would he be in bondage until all the karma is exhausted [karmAvasAnam]? That is not required, since a prapanna is categorically different from others. If one falls dead and gets liberated immediately after his prapaththi, everyone will fear prapaththi thinking it to be a poisonous pond. Now, as he is kept here for some time [after prapaththi], just as people were given knowledge with SrI bhIshma [on his death bed], he will instruct others, others will see his conduct and be reformed and others will benefit in this manner. ISvara will not disregard this final body [of the invididual, though it is material body], thinking “this is the body which facilitated the AthmA to come to me”. For the [dhruptha] prapanna (one who is satisfied with getting liberated soon, but not immediately], it is not [generally] possible to have the urge “my hurdles should be removed immediately and I should reach your divine feet now”. Since the AthmA is used to material body, he will not immediately desire to give it up; [generally] he only gets the desire not to acquire another material body, not to enter a womb; hence as per “thath krathu nyAyam” (logic of results matching the efforts/desire), that is how he will get the result as well. Considering the prapanna’s desire too [on top of the previously explained reasons], ISvara thinks “if he has desire in this material body still, let him remain here for some time”.

In that short time, why is ISvara not avoiding sufferings and diseases for such prapanna and not making him live joyfully differentiating him from others? Just like worldly people, why is ISvara letting him feel anguished when losing something and feel joyful when attaining something? The prapanna is the one who prayed “You should eliminate this hurdle [body] and give me yourself”. But even after knowing that this body [and bodily pleasures] are lowly, the prapanna is not completely abandoning it. If such person were placed in the most joyful state, he will think “if this is filled with pleasure here, why not we enjoy it for some more time?” If the prapanna were placed according to his own desire, he may end up taking birth here in material world again; hence, ISvara, seeing the well-being of the prapanna, thinks “Let him remain like this”. Hence, as the familiar material body naturally goes away and before he desires for another material body, ISvara will fulfil the task of taking him to paramapadham. The familiar body will naturally go; since he does not know what is coming next, he does not have a taste for it. But he superficially knows that “this [materialistic body] is not good”. In the beginning [i.e. while surrendering], since he said a word “please eliminate this for me”, ISvara will not be blamed for giving him apurushArtham [purushArtham is what is desired by the purusha. emperumAn will only give what is desired by the AthmA. As the prapanna asked for elimination of bondage, ISvara will not be blamed for granting that which is not desired by the AthmA]. Now, in the final moments, the prapanna will be in the state of a wood or stone. Hence, ISvara will keep the previous request of the prapanna as the reason; thus, the prapanna cannot reject ISvara’s help, ISvara will grant liberation at that time. He himself declared [in varAha charama SlOkam] that “When one is in the state of matter [during last moments], I will not expect anything from him, and will deliver him myself”. It is said that “These two SlOkams [the two SlOkams recited by varAha emperumAn which are collectively called as varAha charama SlOkam] are said to be emperumAn’s sarvasvam (granting of everything)” These SlOkams are explained further in detail: