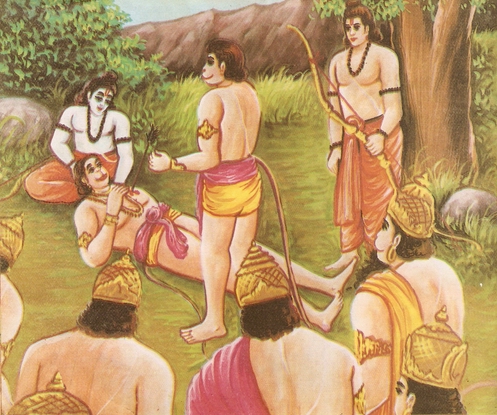 A few samsAris asked AzhwAr “You are saying that you have made worshipping emperumAn as your profession. Is it not enough if you are involved with emperumAn for sometime and be involved with other activities at other times?” AzhwAr tells them “I have just enough time for meditating on the victorious deeds of chakravarthy thirumagan (SrI rAma, son of emperor dhaSaratha). Where is the time for engaging with other activities?”

kazhi sinaththa – one who has lot of anger
vallALan – and who has lot of strength
vAnarar kOn – being the king of monkeys
vAli – vAli’s
madhan – arrogance
azhiththa – one who destroyed
vil ALan – SrI rAma, who was controlling kOdhaNdam, his bow
nenjaththu – in my heart
uLan – has taken residence

Hence
enakku – for me
thozhil – profession
thollai mAl than nAmam Eththa – is only to praise the divine names of that long-standing sarvESvara (supreme being)
enakku – for me
maRRadhuvE – only with recitation of SrI rAma’s divine names, as mentioned earlier
pozhudhu pOdhum – time will pass on

thozhil enakkuth thollai mAl than nAmam Eththa – the profession for me is to praise the sarvESvara (supreme being) who is there for a very long time.

Aren’t we [samsAris] carrying out a lot of other work and in between, reciting emperumAn’s divine names? Why cannot you too [AzhwAr] do like that?

kazhi sinaththa vallALan – one can see vAli’s cruel anger in his act of rejecting his younger brother who fell at his feet and begged him [for forgivance].

kazhi sinaththa vallALan vAnarar kOn – It is clear that unlike SrI rAma who engaged his citizens through his divine form and qualities such as magnanimity etc to make them say “ichchAmOhi mahAbAhum” (we desire to see SrI rAma who has strong shoulders as the king), vAli had subjugated the monkeys through his anger and strength and ruled over them.

vAli madhanazhiththa – one who destroyed the arrogance of vAli

suzhi sinaththa vAli madhanazhiththa – the meaning implied here is that SrI rAma destroyed the vanity of vAli since vAli had condemned his younger brother [sugrIva] who had fallen at his feet seeking refuge.

vallALan madhanazhiththa – the opinion here is that vAli, instead of utilising his strength for controlling people like rAvaNa, used it for befriending them and hence is apt to be controlled.

vAnararkOn madhanazhiththa – the meaning here is that since vAli is a dangerous animal, it is fit to destroy his pride by hitting him by hiding, insead of fighting with him in direct combat.

madhanazhiththa villALan nenjaththuLan – the one who had destroyed the arrogance of vAli is constantly residing in my heart. The opinion here is that when such is the case, where is the time for me to engage with other activities.

We will move on to the 86th pAsuram next.