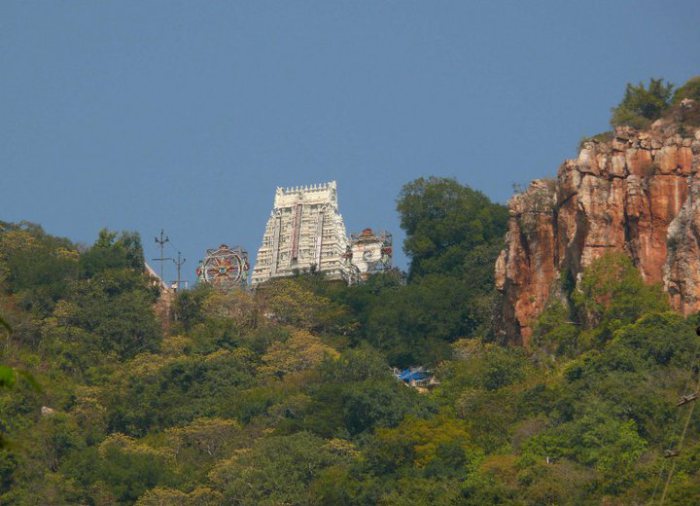 AzhwAr says that he has very high regard for thiruvEngadamalai [thirumalai] where emperumAn, who has the nature of showering mercy even on mahAbali, has taken residence so that he could offer himself to everyone.

neRiyAr aRiyAdhu – not knowing that they [are chEthanas who] are deeply integrated with the path at thirumalai hills
kuzhal kaRRai mun ninRu pin thAzhndhu – sprouting from the hair on the front side of their heads and growing on their back side
iLam giri enRu eNNi – thinking that they are small hills
pUm kodikkaL – creepers with flowers
piriyAdhu – without leaving that place
vaigum – residing permanently
poru punal kunRu ennum – being known famously as thirumalai, with abundant streams
vEngadamE – only thiruvEngadam
yAm virumbum – the one that I desire
veRpu – divine hills

neRiyAr kuzhal kaRRai – on the locks of hair of those who are carrying out penance, thinking only of thiruvEngadam, avoiding being engaged with worldly pursuits.

mun ninRu pin thAzhndhu aRiyAdhu iLam giri enRu eNNi – the creepers there [on thiruvEngadam hills], bearing flowers, would not think that they are human beings with intelligence [those mentioned in the earlier phrase] since they are not breathing or moving their physical bodies, and would grow on them, from front to back, thinking that they are small hills. Alternatively, the words mun ninRu pin thAzhndhu could be construed as referring to those who have locks of hair on their front and back sides of head and the creepers would grow on them. In other words, they have locks of hair on front and back sides of their head due to their greatness.

piriyAdhu pUm kodikkaL vaigum – the creepers, without leaving that place, will carry on with their activities. The creepers will think that if they (who are fully integrated with the path in thiruvEngadam) are human beings, they will move at some point of time or the other and since they are not moving, the creepers will consider them as supporting poles for growing further.

porupunal kunRu ennum vEngadamE – thirumalai having abundance of streams. This mentions about the waterfalls and springs which are seen in abundance in thiruvEngadam.

Let us take up the 54th pAsuram next.