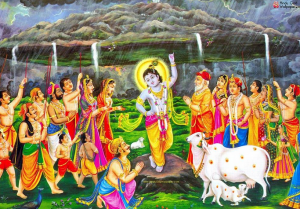 In this pAsuram, svAmi aruLALa perumAL emberumAnAr talks about three types of people. He says that those three types of people would never the eternal abode of sriman nArAyaNan namely ‘paramapadham’ but would keep themselves in the midst of troubles that the worldly births and death cause.

neRi aRiyAdhArum:  There are some people who does not know the path/means to break the shackles of birth and death that happens again and again. They just can’t seem to figure out the way to get out of this loop and are struck in it forever. Such people are being referred to here.

aRindhavar pAR senRu seRidhal seyyAth thI manaththar thAmum: These refer to those people who does not go to a guru (Acharyan) who knows the means to break free from the samsAric (worldly) bondage of births and deaths as shown by the phrase “mARi mARi pala piRappum piRandhu”. These people do not fall under the lotus feet of a guru. Even if they do reach their respective gurus, they do not have a proper conduct towards HIM. Even though the guru is ready to tell the means to break the bondage of births and deaths, the very behaviour of these people would prohibit the guru to tell the secret to them. The reason is that they do not oblige their guru and do services that would please them. They do not request politely with the guru the means to break the bondage. They do not do any kind of work that their guru asks them to do ever. They do not interact closely with guru at all. However, they regard their guru as just another human being and find numerous imperfections in the guru just like how one would find innumerable faults with other normal person. Such people are being describe in this paragraph.

iRai uraiyaith thERAdhavarum: There are yet another group of people who does not have a strong belief in sharanAgathi (total surrender unto the lotus feet of sriman nArAyaNan) shAsthram. The sharanAgathi shAsthram was given by Lord krishna to arjunA in the 18th chapter of HIS “bhagavad gIthai”. Though HE spoke to arjunA, He just used him as a means. HIS ultimate audience was laymen like us and so he just used arjunA as a representative for us.

idar azhundhuvAr: These people would forever be immersed in this woeful world of sorrows and be born again and again. They experience all the pain and would never be able to reach HIS eternal abode of paramapadham. svAmi aruLALa perumAL emberumAnAr says that they will suffer immensely forever.