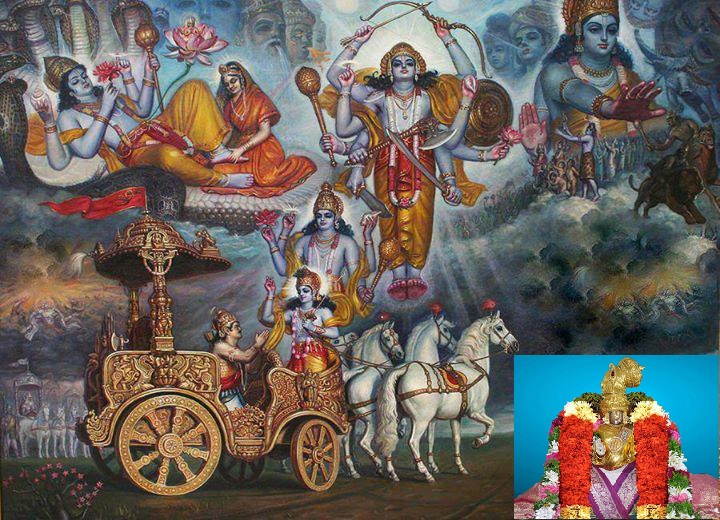 In this pAsuram, mAmunigaL is following AzhwAr’s pAsurams of meditating upon emperumAn‘s parathvam which was thought about incidentally, in his incarnations and instructing the same to others, and is mercifully explaining it.

How is that done? emperumAn’s has greatness which not only makes one who is separated from him to suffer, it also makes that person forget about the separation after reuniting again; he also has the greatness of his qualities which are the cause for that greatness; AzhwAr incidentally thought about his supremacy which is the cause for his qualities and mercifully spoke the same as instructions to others along the lines of ithihAsas (epics) and purANas (ancient history) [which speak about his incarnations], in thiruvAimozhi 2.2 “thiNNan vIdu“; mAmunigaL mercifully explains this starting with “thiNNidhA mARan“.

Those who approach the divine feet of totally surrendered devotees of AzhwAr, who know how well the firm minded AzhwAr mercifully spoke about sarvESvaran‘s supremacy through his incarnations, will not be overpowered by the relationship with body.

In this manner, knowing how AzhwAr instructed emperumAn‘s supremacy, and towards such AzhwAr who established emperumAn’s supremacy,