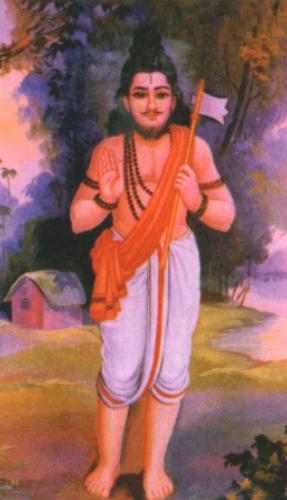 Subsequently, after looking at his face and saying “muga oLi thigazha muRuval seydhu ninRilaiyE“, they forgot their internal anger, and thinking about his many efforts to turn them favourable towards him, being pacified, parAnguSa nAyaki says “We are tormented by you who are the protector in all ways!”.

Tenth pAsuram. They stood there saying “nin muga oLi thigazha muRuval seydhu ninRilaiyE” without seeing what is coming; he did not destroy just their sandcastle but the anger in their heart; once that anger was eliminated, they looked up and observed him from his divine feet to his divine head; he stood there with the joy of winning over them; they are now talking about the greatness of such form.

(as there is no shortcoming in protection of the whole universe)
ninRu – to remain firmly
ilangu – shining
mudiyinAy – wearing divine crown
irubaththOrkAl – twenty one generations
arasu – kings
kaLai katta – destroyed
venRi – victorious
nIL – big
mazhuvAl – one who is having the axe!
viyal – vast
gyAlam – world
mun – during srushti (creation)
padaiththAy – one who created
inRu – now as well
i – this
Ayar kulam – cowherd clan
vIdu – with their families
uyya – to uplift
thOnRiya – one who appeared
karu mANikkach chudar – oh one who is having the form which is radiant like blue gem!
nin thannAl – by you (since you are the protector in all ways, you being our lord who eliminated our anger, and brought us back to life, and having relationship with us and are having an enjoyable form)
AychchiyOm – we who are born in this ignorant cowherd clan
enRum – always
nalivu – suffering
paduvOmE – will go through – she is recollecting and telling about the previous sufferings after being pacified.

Oh one who is wearing the shining, divine crown to remain firmly! Oh one who is having the big, victorious axe which destroyed twenty one generations of kings! Oh one who is having the form which is radiant like blue gem, who created the vast world during srushti and now appeared in the cowherd clan to uplift them with their families! We who are born in this ignorant cowherd clan will always go through suffering caused by you – she is recollecting and telling about the previous sufferings after being pacified. The plural used in all the pAsurams after “nAnadhunjuvan” (I fear for that) in the first pAsuram [as singular], can be construed as “royal we” [treating oneself respectfully] or speaking on behalf of self and her friends.

emperumAn said “Leave that aside; Have I not eliminated your hesitation and won over you?”.