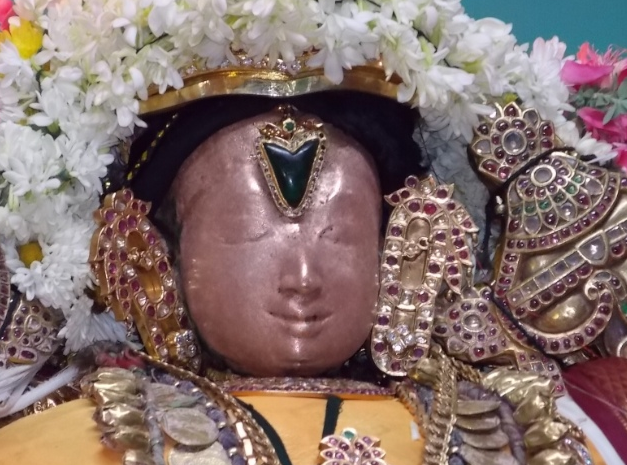 Subsequently, AzhwAr says “You who assumed many incarnation for the sake of your devotees, are not mercifully glancing at me; what shall I do?”.

Second pAsuram. Even after AzhwAr calling out in this manner [as seen in previous pAsuram], emperumAn did not respond to him; seeing that AzhwAr thinks that emperumAn is thinking “You take care of your needs yourself”, and calls him out citing his previous favours.

(showing that form)
ennai – to ensure that I don’t lose my existence
ALvAnE – one who lets me enjoy him
e – in all species (such as dhEva (celestial), manushya (human), thiryak (animal) and sthAvara (plant), for the sake of his devotees)
mA – great
uruvum – incarnations
vENdum ARRAl – out of desire
AvAy – one who assumes
ezhil – with the beauty in those forms, capturing the hearts as said in “pumsAm dhrushti chiththApahAriNAm”
ERE – appears majestic
sem – reddish
mA – big
kamalam – lotus flowers
sezhu – abundance
nIrmisai – on the water
kaN – everywhere
malarum – blossoming
thirukkudandhai – in thirukkudandhai
a – that
mA – distinguished
malar – lotus flower like
kaN – divine eyes
vaLargiNrAnE – oh one who is resting [with your closed eyes]!
nAn – I

emperumAn who is my lord, is having a pure form for me to acquire sathva guNam; he is showing that form to let me enjoy him and to ensure that I don’t lose my existence; he assumes various incarnations in all species out of his own desire; with the beauty in those forms, capturing the hearts as said in “pumsAm dhrushti chiththApahAriNAm” he appears majestic; oh one who is resting with your distinguished lotus flower like divine eyes in thirukkudandhai where there is abundance of reddish big lotus flowers blossoming everywhere on the water! what shall I do? Implies that – while all lotus flowers are blossoming, your two lotus like flowers [eyes] are not blossoming on looking at me.