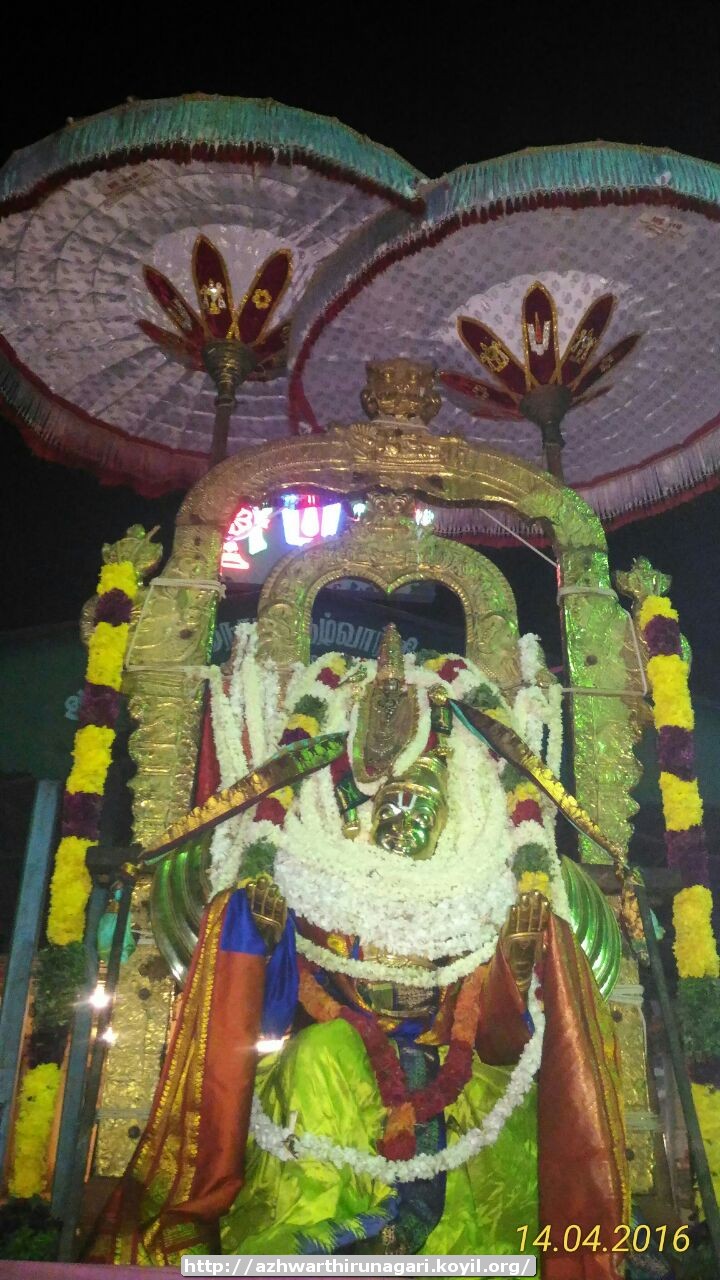 In seventh pAsuram, when asked “Shall we pursue other dhEvathAs to acquire certain unseen benefits?”, AzhwAr replies “You will only get whatever you have already got praying un to them; hence, give up those aspects and surrender unto polindhu ninRa pirAn”.

Subsequently, AzhwAr says “You will only get whatever you have already got from those dhEvathAs; hence, you become a servitor of emperumAn who is the cause of all and who is having garuda dhvajam (flag)”.

Seventh pAsuram. Those who heard AzhwAr in previous pAsuram said “Alright. We will do that [surrender unto emperumAn]. But considering ‘these other dhEvathAs too have some greatness, we have served them; to not waste such efforts and we will wait for those efforts to fructify and finally we will surrender unto empeurumAn” and AzhwAr says “You have already seen the results of worshipping those dhEvathAs; now you do what is required”.

maRRu Or dheyvam – another dhEvathA who cannot be named
pAdi Adi – singing and dancing (being devoted towards that dhEvathA)
paNindhu – worship
pal padigAl – in many different ways
vazhi – through the SAsthram (which instructs one to surrender)
ERi – taking shelter of that dhEvathA more and more
Odi Odi – (as a result, in garbha (womb), naraka (hell) etc which are results of such activities) running/moving around
pala piRappum piRandhu – taking different births
kaNdIr – you have seen in front of you;

(thus)
vAnavar – all those dhEvathAs (whom you are surrendered to)
kUdi – together
Eththa – to be praised and to be surrendered unto (to be relieved of their dangers)
thirukkurugUr adhanuL – in AzhwArthirunagari
ninRa – one who is standing
Adu – swaying (due to devotion towards bhagavAn)
puL – periya thiruvadi (garudAzhwAr)
kodi – having as his flag (which highlights his supremacy)
Adhi mUrththikku – for the sarvESvara, who is the cause of all
adimai puguvadhu – become his servitor.

Singing and dancing another dhEvathA who cannot be named, worshipping him in many different ways, taking shelter of him more and more through the SAsthram, running/moving around taking different births, and seen all these in front of you. You become the servitor of sarvESvara, who is the cause of all, who is having the swaying garuda as his flag, and is standing in AzhwArthirunagari, to be praised and to be surrendered unto, by all those dhEvathAs together.