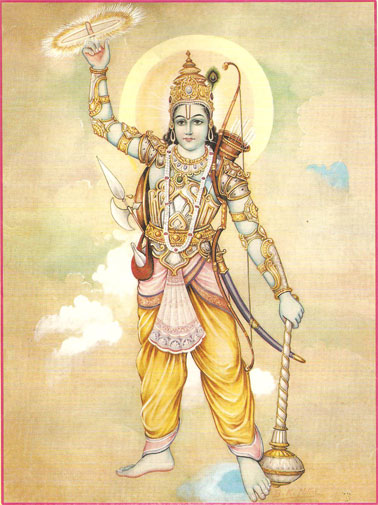 In tenth pAsuram, AzhwAr becomes distressed thinking “How is this internal vision occurring which affects my joy of being forgetful of him when he is not seen physically?”.

Subsequently, AzhwAr says “When I desired to see emperumAn who is known from vEdham, with his divine hand and chakra, and did not get that physical vision, should he shine in my internal vision, making it impossible for me to forget him and sustain myself?”.

chakkaram – manifesting the beautiful combination of your divine hand and the chakra
aNNalE – Oh my lord who enslaved me!
enRu – saying this
thAzhndhu – falling down on the ground (due to not being able to enjoy him)
kaN nIr thadhumba – having overflowing tears
pakkam nOkki – looking around
ninRu – remained
alandhEn – anguished;
pAviyEn – I who am a sinner (sins, which stop me from seeing him)
kANginRilEn – unable to see him;

(but to not forget him, at this stage)
mikka gyAna mUrththiyAya – being natural embodiment of boundless knowledge
vEdham viLakkinai – one who is seen through the lamp of vEdham
en – for me (who desires to see him physically and anguishing due to that)
thakka – matching
gyAnam – gyAnam (wisdom)
kaNgaLAlE – eyes
kaNdu – see
thazhuvuvan – will embrace him.

Saying “Oh my lord who enslaved me by manifesting the beautiful combination of your divine hand and the chakra!”, falling down on the ground and having overflowing tears, I remained anguished; I who am a sinner, was unable to see him; with my matching gyAnam as the [internal] eyes, I will embrace emperumAn who is the natural embodiment of boundless knowledge and is seen through the lamp of vEdham. As the love became the cause for anguish due to not being able to see him, the internal shining wisdom also became the cause for anguish.

Though I am unable to see him, did I at least become saved by forgetting him due to his not shining in my heart?