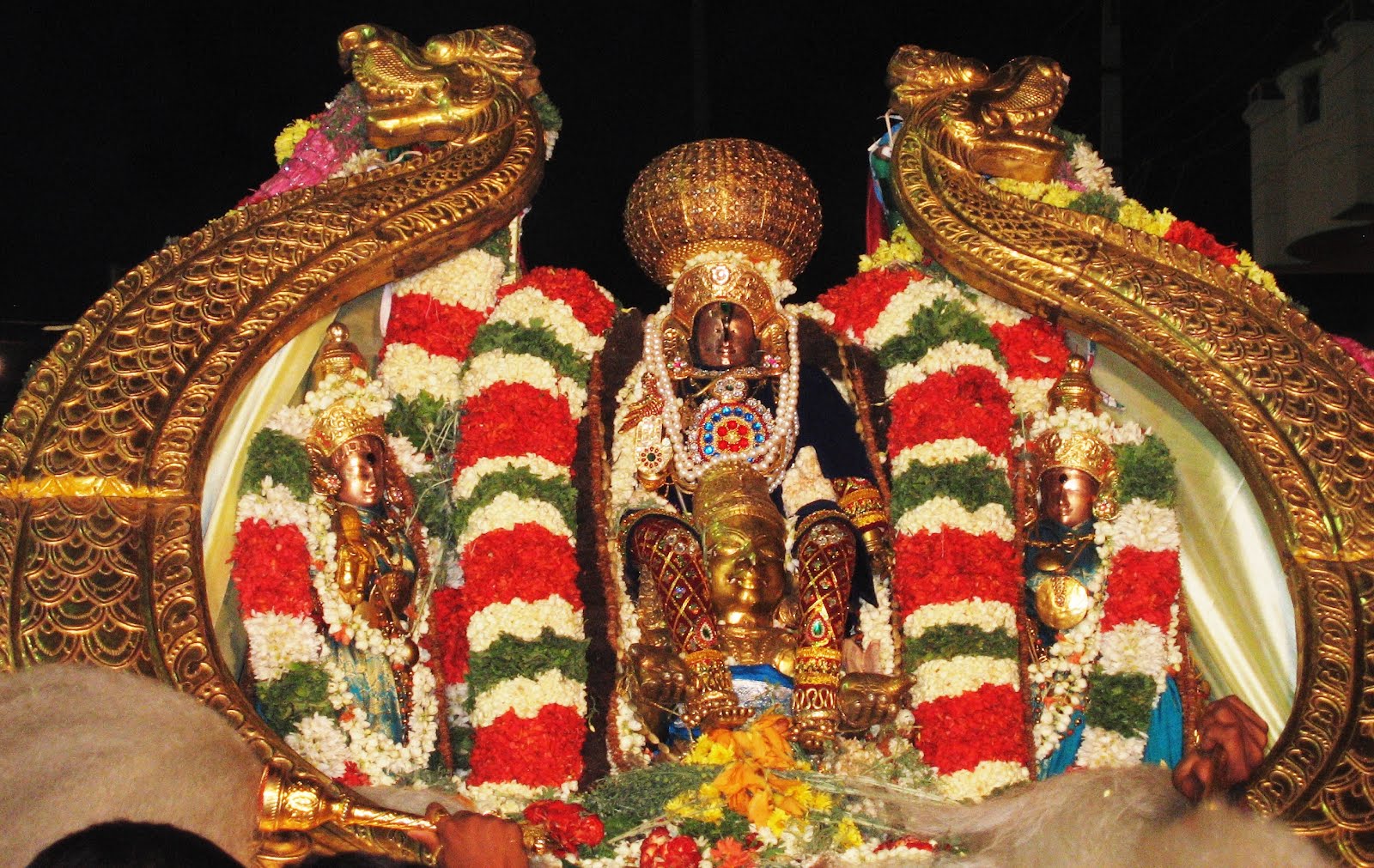 In ninth pAsuram – AzhwAr says “Not just earthly kingdom etc, even the wealth of ascending to heaven etc which are acquired through bodily penance, are also temporary”.

Subsequently, AzhwAr says “Since the other-worldly joy in heaven etc are temporary, you take shelter of ISwara who will establish the goal which is ever-lasting”.

Ninth pAsuram. In the previous eight pAsurams, AzhwAr explained that the earthly joy is temporary; in this, he says “after performing difficult penance by troubling one’s body, when that penance leads to heaven, bhagavAn‘s mercy is required to sanction that; even if such heavenly life is attained by the mercy of bhagavAn, due to its nature, such joy will not last long”.

padi – lands/properties
mannu – wearing always (without removing)
pal – many types of
kalan – ornaments
paRROdu – with the attachment
aRuththu – giving up
aim pulan – the five sensory organs (which are attached to worldly pleasures)
venRu – winning over (to have full control over them)
sedi mannu – (due to lengthy penance) bushes formed around them
kAyam – body
seRRArgaLum – troubled (through fasting etc)
mannum – permanent (existing for a long time, as a result of their penance)
kudi – having settlements
in – very enjoyable
suvargam – svarga (heaven)
eydhiyum – even if they attained

(for such stable joy)
avanai – bhagavAn (who is the benefactor)
Angu – staying there
illAr – those who don’t take shelter of him
mILvargaL – will lose such heavenly life;
mILvillai – to acquire ever-lasting result
kodi – in the dhvaja (flag)
mannu – staying eternally
puL – periya thiruvadi (garudAzhwAr)
udai – one who has
aNNal – sarvESvaran’s (supreme lord’s)
kazhalgaL – divine feet
kuRugumin – try to reach

Even if they attained the svarga which is having very enjoyable settlements and  is [seemingly] permanent (due to their existence for a long time) by giving up lands/properties and the many types of ornaments which are always worn, by winning over the sensory organs and by troubling the bodies [in penance] and having bushes formed around them, if they don’t take shelter of bhagavAn while staying there, they will lose such heavenly life; to acquire ever-lasting result, you should try to reach out to the divine feet of sarvESvaran who has periya thiruvadi staying eternally in his dhvaja (flag). “padi mannu” also indicates “Those [ornaments] which are well fitting with the body”.