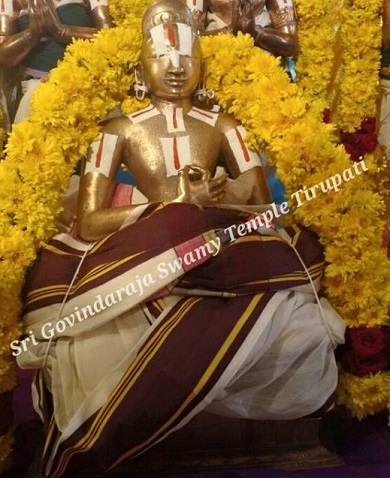 In the end, AzhwAr explains “those who practice this decad, will get all kinds of kainkaryams desired by me”.

Subsequently, AzhwAr explains acquiring the wealth of kainkaryam as the result of this decad.

In the end, AzhwAr explains “those who practice this decad, will get all kinds of kainkaryams at the divine feet of thiruvEnkatamudaiyAn as desired by me”.

nammAzhwAr, the leader of AzhwArthirunagari which is having high (well-grown) gardens mercifully spoke about sarvESvaran who spread his divine feet and measured the earth, in this thousand pAsurams; one who can recite (along with meditating upon the meanings) this decad also, will attain the glorious wealth of kainkaryam (which AzhwAr prayed for) and will live gloriously (in such servitude) being praised by the whole world.