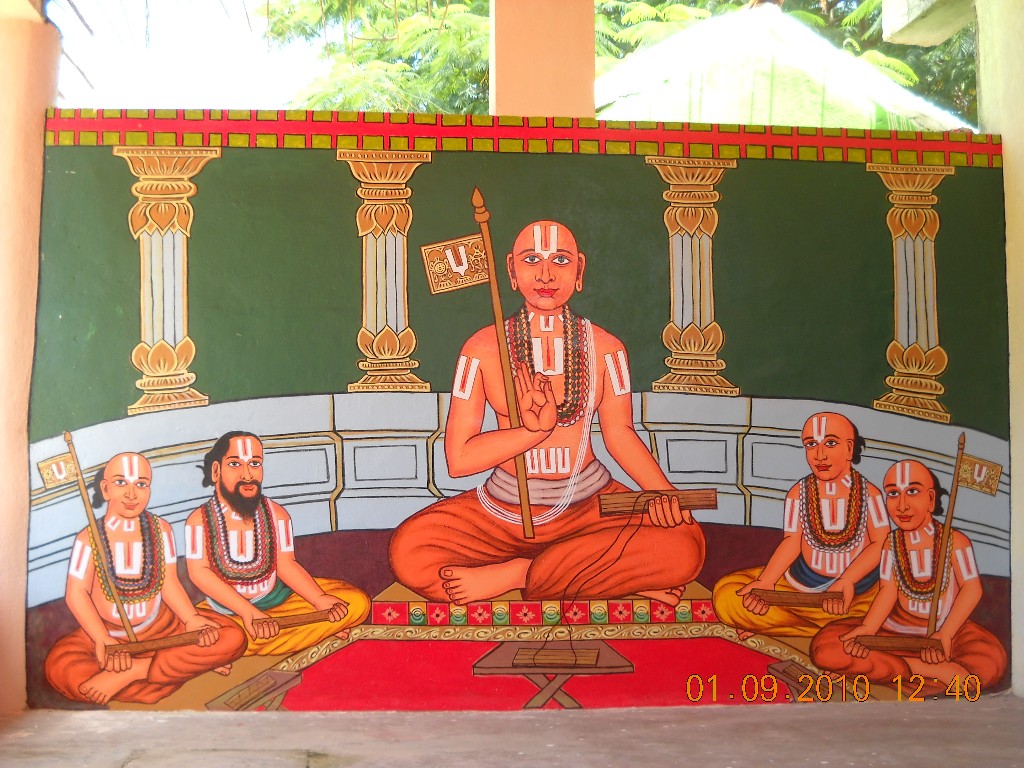 Preface: In the previous pAsuram, we saw that the souls are being classified into three types that includes (a) those that gets birth inside a body again and again due to karma, (b) those that gets liberated from this kArmic cycle of rebirths by perumAL’s causeless cause and (c) those that never get affected from karma and are always in unison with perumAL. The first category of souls are those that are bound by karma in some body or the other. For these souls, birth and death happens time and again just like the flood in a river. What is the reason for this and what is the way to get liberated? This pAsuram answers these questions:

onRu – There is only one

uyir – However, the souls that possess this character of being a servant

itta – are being bound by sriman nArAyaNan

kalam – in a container that is known as “body”

kAriyamum – Such soul’s activities are

vErAm – variegated depending on its karmA

pizhai – The mistake / wrong thing for a soul to do is

pENAmai kANum – not to catch hold the

thiruththAlgaL – lotus feet of an

palam onRu – looking out for any benefits

kulam onRu: All the souls in this universe belong to only one family that is characterized by being a servant to its eternal master SrIman nArAyaNan. The soul’s true character is to not go haywire by its own likes and dislikes, but being obedient to its master. This character is the inherent nature of a soul and would not change. This family is being referred as “family of servants”. An example would be “thoNdakulaththiluLEr” (thirupallAndu 5).

uyir pala: The number of such souls are infinite. These innumerable souls are servants to its master SrIman nArAyanan forever.

tham kuRRaththAl itta kalam onRu: These souls live in a container known as “body”. This body is being given to them by sriman nArAyaNan based on the good and bad deeds (karmA) it performs. All such bodies are made of up only one type of material. This material is called as “prakruthi”. So, it can be said that the body is also one, referring to the lone type of material of which it is made of. An analogy to this would be to say that anything that is made of sand is sand at the end of the day. Anything that is made of a precious metal (like ring, necklace, pendant etc.) is still a precious metal. Similarly, anything that is made of prakruthi is still prakruthi. The phrase “tham kuRRathAl itta kalam onRu” is to be construed in this manner by expanding its meaning. The eternal master sriman nArAyaNan gives a body to these souls based on their individual deeds. “kalam” actually means a container but in this context refers to “body”. Since all the bodies are just made of one type of material, it is being described as “kalam onRu”.

In this poem, we can understand the variegated forms in which a soul can reside in. Within each one of these forms, there are thousands and thousands of sub forms that literally make the count infinite. How much ever innumerable / infinite the types of body may be, it can still be grouped under a common umbrella known as “body” just because all of them are made of the same material known as “prakruthi”. nammAzhvAr in his thiruvAimozhi says”

Here nammAzhvAr celebrates the brilliant knowledge of perumAL who gives a body to these innumerable souls without missing / forgetting even the smallest karma that a soul had did in its innumerable lives.

kAriyamum vErAm: Similar to the innumerable souls, the activities that these souls do inside a body is also innumerable.  While the good activities/deeds would make the soul go to heaven for some time, the bad deeds would take it to hell for some time. At the end of the enjoyment/punishment time in heaven and hell respectively, it is back to the cycle of births and deaths.

“vaguththAn vaguththa vagaiyallAl kOdi thoguththArkkum thuythalaridhu” is a thirukkuraL. The subject “vaguththAn” refers to SrIman nArAyaNan who so adeptly calculates the amount of good and bad activities that HE ensure that it is only that particular soul that reaps/risks its deeds. HE does not make the deed transferable to another soul due to HIS ignorance or inability to do it.

In the word “kAriyamum”, the suffix “um” reveals something. There are multitude of souls but there is only one family for all of them namely the “family of servants”. Similarly, there are only one type of body that these souls go into yet there are multitude of activities that each and every soul does. The basic nature of a soul is to be subservient to its eternal master sriman nArAyaNan. However, without realizing this true nature, there are countless soul that go into the cycle of perform multitude of deeds, reaping their risks and rewards in hell and heaven, coming back to the universe, be born again, perform countless deeds, die, go to heaven/ hell. This is like a never ending cycle that is like water flowing in a flood. If one were to know the real reason for this and would want to get liberated from this, then it behooves one to be cognizant of the following:

palam onRu kANAmai kANum karuththAr thiruththAlgaL pENAmai kANum pizhai: The reason is very simple. The mistake is that a soul does not go and catches the lotus feet of an AchAryan. This is being described by the phrase “karuththAr thiruthAlgaL pENAmai kANum pizhai”. An AchAryan is being celebrated as “palam onRu kANamai kANum karuthAr”in this pAsuram. When an AchAryan takes up his disciple, he does not seek any materialistic benefit for himself that includes the likes of fame, money or the capability of having so many sishyAs who serve them as his servants etc. The only thing that he desires is for his sishyAs to go to paramapadham. This is the only thing that he yearns and nothing else. With this, he blesses his sishyAs and teaches all that is needed for the sishyAs to go to the ultimate destination of paramapadham. The act of not taking refuge under the lotus feet of such AchAryan is verily the reason for the never ending cycle of births and deaths. The very look/grace of an AchAryan does a world of good for a soul. One should go to an AchAryan and take refuge under his lotus feet. This would ensure that the kArmic deeds accumulated over eons of births and deaths gets annihilated and so would pave way for liberation eventually. Such greatness of an AchAryan was being described in this pAsuram.  “thiruththAlgal pENudhal” would mean the act of catching hold of an AchAryan’s lotus feet. “thiruththAlgal pENAmai” would refer to its opposite, i.e., not holding the lotus feet of an AchAryan. This is the fault (pizhai). We can see this greatness of AchAryan in the SrIvachana bhUshaNam.

SasthrAs talk about bhakthi that promises to take one to paramapadham. More than that there is prapaththi (total surrender) unto the lotus feet of perumAL SrIman nArAyaNan. Both these methods cannot take a person to paramapadham. In such a case, the only option available to a person who has abandoned bhakthi and prapathhi is to catch hold of an AchAryan who is an embodiment of impeccable character. If such an AchAryan regards his disciple by calling him “he is mine”, out of the love he has for his disciple, then there is nothing more a person needs. It can take a person to paramapadham no matter how qualified the disciple is. Hence, the essence of this pAsuram is that those who become the target of an AchAryan’s grace go to paramapadham and those who do not, suffer from this never ending cycle of births and deaths.