This thirumanthram ‘vAyththa’ is that it is complete in words and meanings, and so is according to our true nature. It is said too that ‘Sarvam ashtAksharAnthassadham [hArItha smruthi – 3.45]’ (everything is present in this thirumanthram that is of eight letters) – such is the greatness of thirumanthram.

maththimamAm padham pOl – Like the middle word which is present in it (thirumanthram) that is namas. That word (nama:) removes the hurdles regarding: svarUpam (true nature of self), upAyam (means), and purushArththam (goal), and tells us about what is svarUpam, upAyam, and purusArththam; also, as said in ‘sidhdhE thadheeya sEshathvE sarvArththAs sambhavanthi hi’ (by being servants of devotees all good are created isn’t it?), this manthram includes servitude to emperumAn’s devotees. It is the meaning of this word that is according to our true nature.

seerththa madhurakavi – also says about him having the honor of not knowing any other master.

Also, to the divine feet of nammAzhvAr, SrI nAthamunigaL had repeated this prabandham 12000 times, and due to that nammAzhvAr’s mind was soothed, and so all the dhivya prabandhams became available, isn’t it? It is the greatness of this prabandham that that is attributed due to this too. 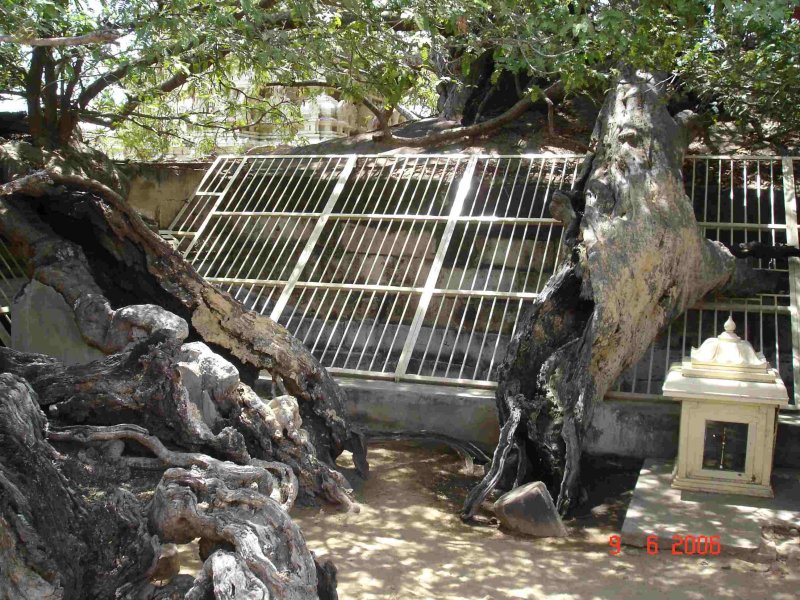 In this way this prabandham which is having the greatness of conveying the inner meaning, that is madhurakavi AzhvAr’s prabandham of kaNNinuN chiruththAmbu, they included this in the middle of beautiful dhivya prabandhams.

Arththa pugazh AriyargaL thAngaL – AchAryas who follow the way of preceptors, determined the ways of madhurakavi AzhvAr (being dependent on AchAryan), and they have the glory that came due to researching the meanings of dhivya prabandhams; 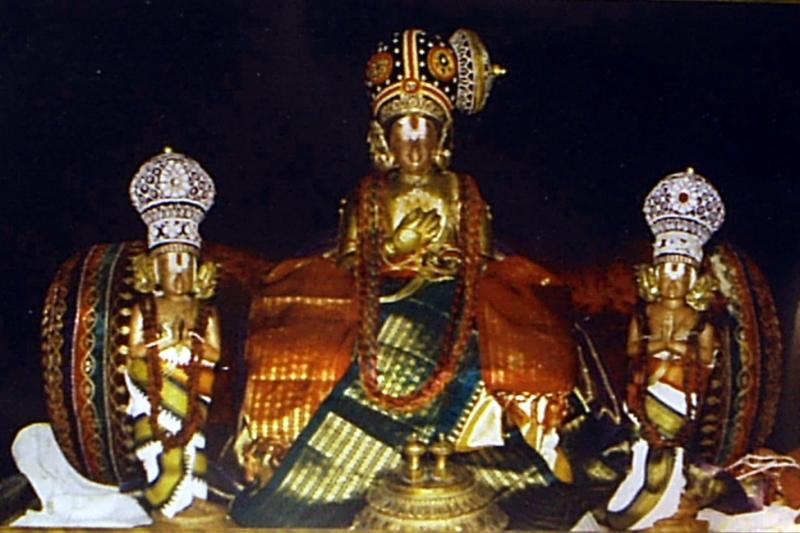 Since this prabandham gives the meanings expressed in pathikams like ‘payilum sudar oLi [thiruvAimozhi 3-7]’, and ‘nedumARku adimai [thiruvAimozhi 8-10], the AchAryas researched its greatness in meanings; like how when constructing a garland one would set a central gem store in the middle, due to which the whole garland would brighten up/become meaningful, they included kaNNinuN chiruththAmbu in the middle of other prabandhams such that those prabandhams became meaningful/useful.

and would enrich those other dhivya prabandhams too.

chiththirai month’s chiththirai star day is the incarnation day of thirumalai ananthAzhvAn too who is a follower of the words of AchAryan, isn’t it? That is why he got the dhAsya name of madhurakavi dhAsan.

When one goes to bhagavAn for carrying out the process of surrendering, one needs to have strong desire for him as well as complete faith in him that he will grant us what we are praying for. In order to have these qualities, SrI rAmAnuja first prayed to pirAtti in the 2nd chUrNai and was granted the same by her in the 3rd and 4th chUrNais. Then he determined that only SrIman nArAyaNan is capable of granting him mOksham since he alone possesses all the qualities that are required of an entity to do this. He extolled all the auspicious qualities of bhagavAn and listed his various properties in both the worlds (the nithya vibUthi or permanent/spiritual realm and the leelA vibhUthi, the samsAram or materialistic realm). Having confirmed that he is the only one who can grant mOksham and  that he is the means or path for getting that boon, with pirAtti as purushakAra bhUthai (one who recommends) he surrendered to bhagavAn. We have seen this in the 5th chUrNai. Now we shall see the 6th chUrNai.

SrI rAmAnuja hesitates a bit here, as he feels that people in coming years would believe that he was the first one to perform SaraNAgathi. People may think that it is not necessary to check with SAsthram (religious treatise) on what it says about SaraNAgathi and that it is not required to see if preceptors before him had done SaraNAgathi. Hence he  quotes from purANas (works of time immemorial) and pUrvAchAryas (preceptors) on SaraNAgathi. Two such SlOkas (verses) from purANas form chUrNai 6.

At the time of surrendering, one should give up everything (that one has been holding on to in samsAram) and hold on only to bhagavAn‘s divine feet. In bhagavadh gIthai, krishNa says in his charama slOkam (verse 66 in chapter 18) to surrender to him after giving up all the dharmas (righteous paths). In the earlier five chUrNais, Sri rAmAnuja had not mentioned anything about what he had given up. Will his earlier act of surrendering without mentioning what he had given up, not go waste? No, it wouldn’t. In dhvaya mahAmanthram also, there is mention of what is to be held on to (bhagavAn‘s divine feet) and no mention of what is to be given up. Our pUrvAchAryas (preceptors) also did not insist on this when a person came to perform SaraNAgathi. They were happy that he came at all to perform it. bhagavAn sees whether the jIvAthmA is scared of samsAram and has the strong desire to come to him. bhagavAn does not create the desire in the jIvAthmA but helps in the furtherance of that desire.

Considering all the above, SrI rAmAnuja now explains what all should be given up at the time of surrendering. It is not that he is surrendering a second time, He has already carried it out. It is only to re-emphasise the fact that our  pUrvAchAryas  mentioned this and also to tell us that bhagavAn is gladdened by hearing it from us.

First let us look at the chUrNai.

In the first line he mentions giving up those entities which are all chith (those with thinking ability) and in the second, those which are  achith (those without thinking ability). In our sampradhAyam (traditional beliefs and practices), we consider bhagavAn as the upAyam (path to take us to him). Any other path such as karma yOgam (disposition through doing things mentioned in SAsthram or religious treatise) or gyAna yOgam (disposition through knowledge on bhagavAn) or bhakthi yOgam (disposition through devotion to bhagavAn) is considered as upAyAnthram (path other than bhagavAn). All the entities referred to by Sri rAmAnuja in the first two lines of this chUrNai are those which are aids in upAyAnthram. Also, these entities are prayOjanAntharam (those which are enjoyed other than bhagavAN who should be real prayOjanam). Thus the entities in the first two lines are both upAyAntharams and prayOjanAntharams. Hence SrI rAmAnuja says that he is giving up all these which are inimical to our svarUpam (basic nature) in reaching bhagavAn through SaraNAgathi.

pitharam mAtharam – Father and Mother. It would appear odd that SrI rAmAnuja mentions one’s father and mother as the first persons who are to be given up when SAsthram says “mAthru dhEvO bhava:” (mother is like God) and “pithru dhEvO bhava:” (father is like God). Father and mother being like God is indicated as upAsana angam (aid to bhakthi) to a bhakthi yOgi {one who desires to reach mOksham through bhakthi (devotion)} whereas for one who surrenders tobhagavAn through SaraNAgathi path, parents are like aids to upAyam (path to attain bhagavAn). We should give up father and mother as upAsana angam only and  not when they help in reaching bhagavAn through SaraNAgathi.

dhArAn – wife. How can one give up one’s wife, with whom one has walked seven steps around the agni (dhEvatha for fire) at the time of marriage? Wife is said to be sahadharmachAriNi (one who comes together when treading the path of dharma). If one is doing dharma as a means of attaining mOksham, then such dharma should be given up. If one’s wife helps in doing such a dharma (which is taken as a path to attain mOksham) then she should be given up. But if she helps in doing dharma as kainkaryam (service to bhagavAn), then she should not be given up, is the subtle meaning here.

puthrAn – son. It is said in SAsthram that once a son is born, the father  is saved from going to a naraka (hell) called puthu. When a person is trying to attain mOksham through bhakthi, he needs to beget a son as otherwise he would go to hell. Such a son is considered as upAsanAngam, aid in bhakthi yOgam. Since the context here is to reach bhagavAn through SaraNAgathi, such a son is not needed and hence is to be given up.

bandhUn – relatives. Relatives constantly invoke bhakthi yOgam for reaching mOksham and hence are upAsanAngam. Like before, they are not required and can be given up, if one is trying to reach bhagavAn through SaraNAgathi. In some cases, the relatives would be very well off, either financially or socially (in society). One would be tempted to boast of being their relative, thus falling into the trap of prayOjanAntharam (source of enjoyment other than bhagavAn as we have seen earlier). Here too, they are fit to be given up.

sakheen – friends. Friends would also encourage a person to go the bhakthi yOgam way and hence are to be given up. Moreover, a person would be close to his friends and treat them as confidantes and thus the friends would be prayOjanAntharars and are fit to be given up.

gurUn – AchAryas or guides. SrI rAmAnuja had five gurus and he was greatly attached to them all. How will he recommend giving up one’s guru? If a guru shows the path of bhakthi for attaining mOksham, he is fit to be given up, as we have seen earlier in other cases. guru should not help in performing yagna (rituals) for worldly materials. Such a guru should be given up.

rathnAni dhana dhAnyAni kshEthrAni cha – rubies (reference is to all types of gems here), wealth, food stuff, land etc. These help in performing yagna. Also they are fit for enjoyment otherwise for worldly pleasures. Hence being upAyAntharam and prayOjanAntharam, they are to be given up.

sarvadharmAmScha – all righteous paths mentioned in SAsthrams. Here the reference is to other upAyams (paths) such as karma, gyAna, bhakthi yOgams. The word sarva here refers to parts of dharma such as sandhyAvandhanam (prayer offered three times a day to the dhEvathA, sandhyA), tharppaNam (ritual offered to forefathers on selected days in a month or year) etc.

sarva kAmAmScha – all desires. Starting from desire for children, wealth etc, leading to svarga aiSvarya (heaven) ending with brahma aiSvarya (position of brahmA, the dhEvathA for creation). All these desires are to be given up.

santhyajya – giving up with a feeling of being ashamed for having desire for such lowly things when compared to the divine feet of bhagavAn. This word santhyajya is to be taken together with each of the chith and achith entities listed above.

lOkavikrAntha charaNau – The two exalted feet of bhagavAn who measured all the worlds with his foot when he took the avathAram (incarnation) of vAmana (or dwarf) and transformed himself as thrivikrama (one who strode all the three worlds in three steps). He placed his exalted feet on the heads of those who did not have any particular liking for him and even on those who opposed him. That he came down to earth taking vAmana avathAram shows that he is swAmy (owner); that he came on his own shows his quality of sauSeelyam (magnanimity); that he touched our heads with his feet shows his quality of vAthsalyam (considering even the faults of devotees as good qualities); that he came right in front of our eyes and blessed us with his feet shows his quality of saulabhyam (easy to approach). All these are qualities found only in bhagavAn. SrI rAmAnuja invokes that bhagavAn here.

thE – you. Refers to swAmy (lord or owner) who owns all the worlds. pirAtti (mahAlakshmi) being always inseparable from bhagavAN, is also invoked here to carry out her role of being purushakArabhUthai (recommending nature).

vibhO – refers to his all pervading nature, which contains all the essential qualities of gyAna bala aiSvarya etc which we have seen earlier (6 important qualities).

Thus SrI rAmAnuja very vividly captures in this chUrNai, all the entities which are to be given up and the entity that is to be held on to.

Let us now move on to chUrNai 7.