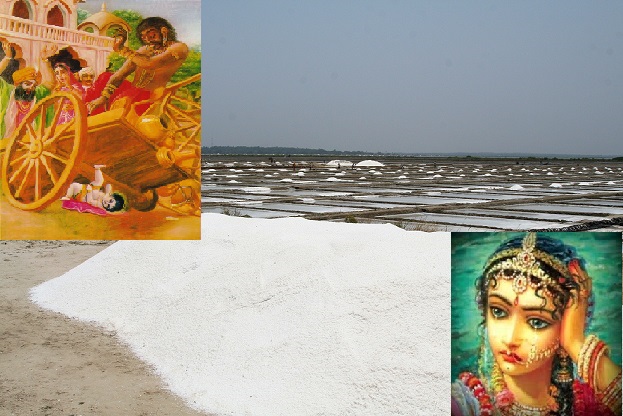 In the eighth pAsuram, not knowing the difference between land and water due to darkness, parAnkusa nAyaki reaches a salt-pan (where sea-salt is prepared) and asks it “did you also become flattened and are suffering for showing attachment towards emperumAn like me?”.

Eighth pAsuram – Retracting from the darkness, parAnkusa nAyaki walked aimlessly and reached a salt-pan, which too is dark and walked in to it. Seeing it overflowing like those who cross the boundaries and send messages to their beloved, she asks “Oh poor thing! Did you get captivated in krishNa’s act of killing sakatAsura?”.

Oh salt-pan that has huge water which resembles dense darkness! You look bewildered and are not sleeping even if night and day end (change).  Thus, did you become captivated with the compassion of the great person (krishNa), who kicked the rolling wheel (sakatAsura) with his lotus feet, and did you feel pained?