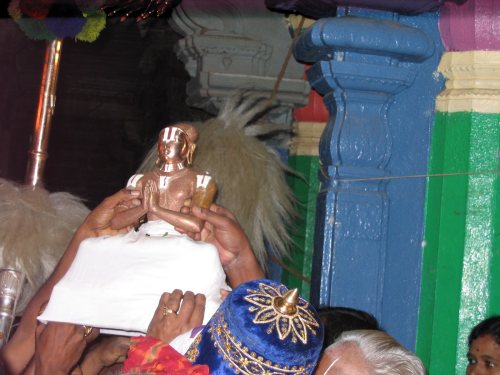 In the end, AzhwAr mercifully highlights the result for those who learn this decad.

Subsequently, AzhwAr mercifully explains the result of this decad as elimination of birth (in this material realm).

In the end, AzhwAr says that those who learn this decad will not be born in this samsAram where it is an up-hill task to experience bhagavAn.

In the end, AzhwAr says that those who are capable of practicing (the principles explained in) this decad will not be born in samsAram (material realm).

This decad is explained by AzhwAr in the pristine manner (without any defect) about emperumAn who does not have the defects of hesitating (to bless the devotees)  on seeing his own greatness and failing them on seeing their faults. Those who can learn this decad among the thousand pAsurams from thiruvAimozhi will not be born in material realm.

In the next article we will enjoy the next padhigam (decad).