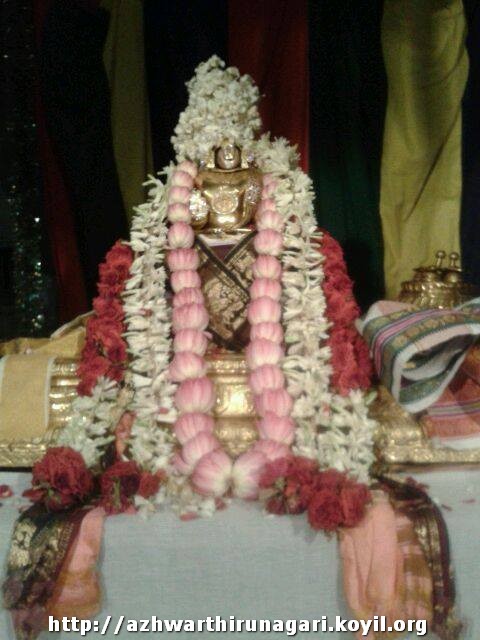 In the end, AzhwAr says those who learned this thiruvAimozhi (padhigam/decad) will get the unlimited wealth of the liberated souls in paramapadham.

Subsequently, AzhwAr says that the result of this thiruvAimozhi is the wealth and enjoyment of liberation.

In the end, AzhwAr says that just by reciting the pAsurams in this thiruvAimozhi (padhigam/decad), one will reach paramapadham.

nammAzhwAr, who is the controller of beautiful AzhwArthirunagari which is surrounded with fertile fields, approached and mercifully spoke about kaNNan emperumAn who is the master of chEthanas who are the residents of the seven types of worlds in these 1000 pAsurams of thiruvAimozhi in andhAdhi style. For those who recite this padhigam (decad – 10 pAsurams) which reveals AzhwAr‘s devotional mood and relationship with emperumAn, lofty wealth of kainkaryam in parampadham is achievable.

“aLavu iyanRa” (crossing the boundaries) is attributed to kaNNan emperumAn who crossed the limits in mixing with his devotees. It can also be attributed to the thiruvAimozhi itself which has unlimited glories.

Two summaries given by nampiLLai in the end.

First summary – explaining the message in each pAsuram:

Second summary – explaining the attributes of gataka (AchArya) as seen in the pAsurams: