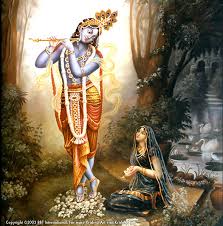 Fifth pAsuram. AzhwAr says “With fresh flowers, recite his divine name as an outlet for the bliss; as you do that, you will acquire the activities which match your true nature”.

(not stopping with that, with love)
avan nAmam – the divine name of such nArAyaNa
pAdIr – sing;

(such worship and sAmagAnam (singing))
vIdE – as mOksham, the ultimate goal
peRalAm – can attain.

Every day, approach him with flowers; sing the divine name of such nArAyaNa; you can attain the ultimate goal, mOksham (which is nothing but such worship and singing).

Furthermore, although bhagavAn was himself unarmed in the mahAbhAratha war, yet the five pANdavas whom he had vowed to protect couldn’t be defeated by the hundred kauravas although they were armed with a mighty army and having numerous weapons. Thus, bhagavAn is called ‘aparAjitha:’ – he who makes his devotees invincible (and he who is himself invincible).

This is shown by many knowledgeable men in SrI mahAbhAratha, as seen below:

The other scriptures have collectively shown thus:

Etymology: He who had no defeat at the hands of the armed force of dhuryOdhana and others at any place (and thus, who made his dear devotees – the pANdavas – invincible due to his protection) is called ‘aparAjitha:’.

How is it that the powerful entities do not easily overpower the powerless entities at all times? It is because every single entity is the body of bhagavAn. He would not do anything that is undesirable to his body. Thus, every entity is protected.

This attribute is reflected in this divine name ‘viSvamUrthi:’ – the one who possesses the entire world as his body.

bhagavAn himself declares thus in the bhagavath gIthA: “Oh arjuna, I am the indweller residing in every entity in this creation”

Etymology: He who possesses the entire world as his divine body is called ‘viSvamUrthi:’.

bhagavAn’s divine body is big enough to house all entities in it at once. Thus, he is called ‘mahAmUrthi:’ – the one with a huge body.

This is shown in the bhagavath gIthA thus (while showing the viSvarUpa): “Oh arjuna, look at all the worlds and entities thereof stationed in one small part of my divine body, including all sentient and insentient entities.”

Etymology: Since bhagavAn’s divine body is the sole refuge of all entities in this world (since his body is huge enough to house all these entities at a time), he is called ‘mahAmUrthi:’.

Whatever in this world is luminous by whatever proportions is finally a part of his divine body. Thus, bhagavAn himself is called ‘dhIpthamUrthi:’ – the one with a luminous body.

bhagavAn himself declares thus: “Know all those objects that are considered prosperous, luminous and powerful in this world as having born from just a fraction of my effulgence”

Etymology: Since all objects that are luminous by any proportions in this world are just a part of his divine body, he is called ‘dhIpthamUrthi:’.

The sentient and insentient entities are all the property of bhagavAn even at the time of deluge, when they do not have the distinction of names or forms. Thus, he is called ‘amUrthimAn’ – the master of indistinct entities.

“The basic elements namely earth, water, fire, air and space, along with other entities namely mind, intellect and ahankAra are said to be the manifestations of my inferior property. My superior property is completely different from these, and is characterized by sentient entities, with which this world is borne”

Etymology: The word ‘amUrthi:’ connotes the collection of sentient and insentient entities in their subtle state (with no distinction of names and forms). He who is the master of all such subtle entities (by being their indweller, or in other words – possessing them as his divine body) is called ‘amUrthimAn’.

Even while having incarnated as krishNa, bhagavAn never gave up his four forms of vyUha – namely vAsudhEva (as krishNa in his own form), sankarshaNa (as balarAma), pradhyumna (as bhagavAn’s son) and anirudhdha (as bhagavAn’s grandson). Thus he is called ‘anEkamUrthi:’.

Alternately, the vishNu purANa shows thus: “bhagavAn krishNa – the son of dhEvaki – took up as many forms at once as there were gOpikas, who were sixteen thousand and one hundred in number!”

Since bhagavAn took (takes) such extraordinary forms in multitude, he is called ‘anEkamUrthi:’ – the one with numerous forms.

Etymology: There were sixteen thousand and one hundred wives. Since bhagavAn also took so many forms at once, he is called ‘anEkamUrthi:’.

Although bhagavAn has all the glories stated till now, yet he concealed them under his human appearance. Hence, he is called ‘avyaktha:’ – the concealed one.

bhagavAn says thus about himself:

Etymology: Since bhagavAn conceals his true nature under the guise of a human form (as krishNa), he is called ‘avyaktha:’ by the knowledgeable men learned in the highest philosophy.

Thence, the viSvarUpa form of krishNa is hailed. Since bhagavAn showed his universal form viSvarUpam to arjuna who was keen on seeing that form, he is called ‘SathamUrthi:’ – the one with hundreds of forms.

bhagavAn says thus to arjuna: “See my glorious forms, oh arjuna! Behold the hundreds and thousands of forms of mine…”

Etymology: Since bhagavAn showed hundreds of forms in his viSvarUpa to arjuna, he is called ‘SathamUrthi:’.

bhagavAn is further called ‘SathAnana:’ for the same reason (as explained in the previous divine name). In the same viSvarUpa form, arjuna glorifies thus: “I see in your glorious form a multitude of faces, eyes, divine jewellery, weapons, etc…”

Etymology: Since bhagavAn showed arjuna hundreds and thousands of faces in his viSvarUpa form, he is called ‘SathAnana:’.

This is as per the scriptural statements thus:

Etymology: Since bhagavAn has no second entity that can be grouped with him in all his greatness (meaning, since bhagavAn is distinct from all other entities), he is called ‘Eka:’.