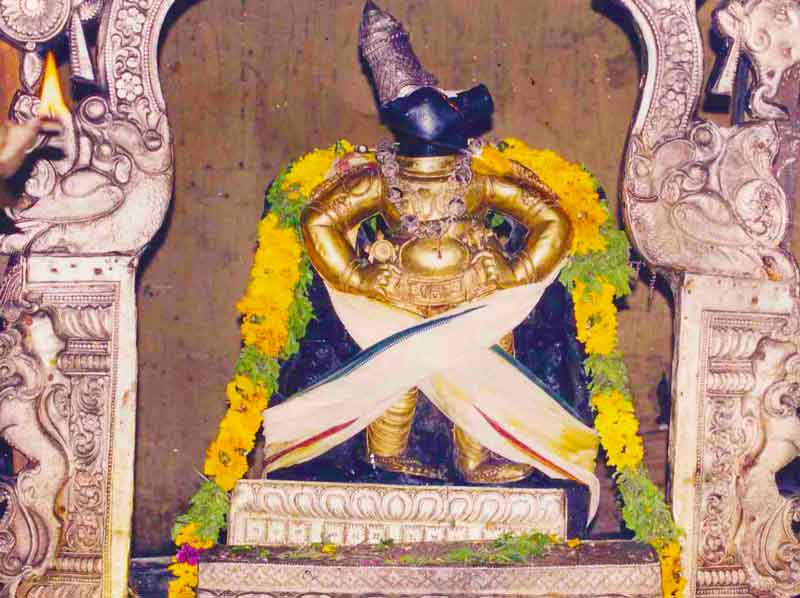 Thus, bhagavAn is replete with infinite objects of enjoyment, bliss derived thereof, the tools in deriving such bliss etc. Thus, he is called ‘nandha:’. Since he is in possession of all such entities, the ‘ghanja’ (घञ) adjunct is used per grammatical rules.

As explained till now, bhagavAn sincerely keeps up his vow of protecting his devotees – right from their first step towards bhagavAn till their attainment of bhagavAn. Thus, he is called ‘sathyadharmA’ – the one who follows his ‘dharma’ religiously.

Etymology: The one who devoutly carries out his vow (which is also his ‘dharma’) of protecting his devotees right from their initiation up till their attainment of mOksha is called ‘sathyadharmA’. This eight lettered manthra enhances honesty and righteousness amongst devotees.

With such divine glories, bhagavAn pervades all of the three vEdhas. Hence, he is called ‘thrivikrama:’.

Etymology: With his unbounded glories, the one who pervades all of the three vEdhas is called ‘thrivikrama:’.

(NOTE: The ‘three vEdhas’ referred to in this divine name actually represent the three types in vEdhas namely ‘Rk’, ‘yajus’ and ‘SAma’. These three types only make up the four vEdhas that we know, viz rig vEdha, yajur vEdha, sAma vEdha and atharvaNa vEdha)

The dhyana SlOka for kapila maharishi says thus: “…then one must remember him, who orally expounded the meanings of vEdhas, such as Rk and others”

Etymology: bhagavAn, as kapila – who visualized the true purport of vEdhas, is called ‘maharshi:’.

The root ‘kabru’ कबृ (hue) gets the letter ‘pa’ substituted in place of ‘ba’, and is suffixed with the ‘ilach’ (इलच्) adjunct, resulting in the divine name ‘kapila’ (कपिलः).

This feature of bhagavAn is hailed in the scriptures thus:

Further, the dhyana SlOka of kapila muni says thus: “…unto him who promulgates his philosophy”.

As seen here, kapila maharishi promulgated his school of philosophy, and hence called as ‘AchArya:’.

Etymology: Only since bhagavAn promulgated his philosophy as kapila, he is called ‘kapilAchArya:’.

Although the sixty thousand sons of sagara (सगरः) offended him, bhagavAn kapila maharishi forgave them at once when amSumAn (अंशुमान्) saluted him on their behalf. Thus, he considers even small noble deeds as great things, which is why he is called ‘kruthagyna:’.

It is said thus in the vishNu purANa:

“When amSumAn approached kapila maharishi and pleased him by devoutly prostrating before him, that bhagavAn commanded amSumAn to seek a boon in return”

Etymology: He who considered the small noble deed of amSumAn – of humble submission – with great compassion is called ‘kruthagyna:’.

The SrImath rAmAyaNa hails thus: “That vAsudhEva, unto whom all of these worlds belong, bears all of these at all times, taking the form of kapila”.

Thus, he is called ‘mEdhinIpathi:’ – the master of all worlds.

Etymology: The one who bears all the worlds in the form of kapila is called ‘mEdhinIpathi:’. This nine syllable manthra is known to bestow land unto the worshipper.

“In order to help the noble souls, I shall show them (make them realize) the three entities namely insentient nature, sentient soul and the supreme soul in their world in the form of kapila”.

Alternately, bhagavAn shows this truth through the three syllables in the praNava manthra.

Also, as seen earlier (62nd divine name), varAha bhagavAn had three humps on his back. Thus also, he is called ‘thripadha:’.

Etymology: bhagavAn preaches about the three entities namely achit, chit and ISvara to all his devotees. Alternately, he is represented by the praNava manthra, which in turn expounds the three entities. Also, in his incarnation as varAha, the word ‘padha’ refers to the hump on his back. varAha bhagavAn had three such humps on his back. For all these reasons, he is called ‘thripadha:’.

Thence the varAha avathAram of bhagavAn is hailed. Since bhagavAn protected brahmA and other dhEvas during their fear of deluge, he is called ‘thridhaSAdhyaksha:’.

Etymology: The one who protected brahmA and others during their fear of deluge is called ‘thridhaSAdhyaksha:’.

(Note: This is not the real deluge that is being spoken of. Rather, when a demon named hiranyAksha hid the land or bhUmi under water, there was no place for brahmA to create any object. This instilled in the dhEvas a fear of deluge, which was evaded by bhagavAn in the form of varAha by killing hiranyAksha)

As varAha, bhagavAn held bhUmi at the tip of his tusk. Hence, he is called ‘mahASrunga:’ – the one with a magnificent tusk.

The scriptures establish this fact in various places, thus:

Etymology: He who has the entire bhUmi at the tip of his tusk is called ‘mahASrunga:’. 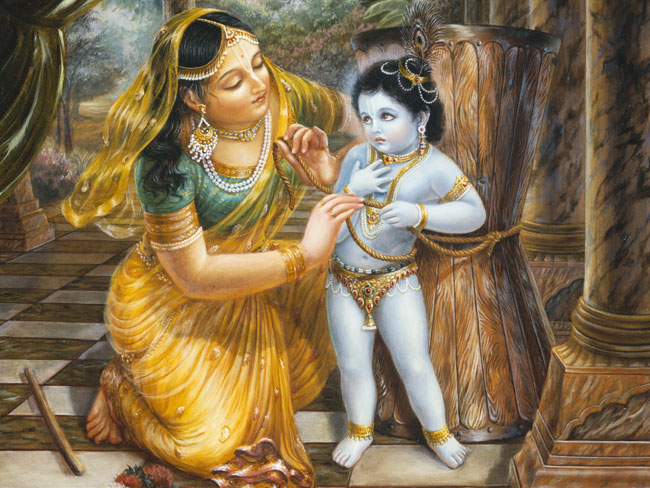 uralOdu – (tied up) with the mortar
kattuNda peRRimaiyum – how great it was being tied down
Ayar vizhavin kaN – in the ArAdhanai (worship) carried out by the herdspeople to indhira, the chief of celestial entities
thunnu sagadaththAl pukka peru sORRai – the huge quantum of food carried by many carts
annadhu Or bUdhamAy – taking the form of a demon which cannot be spoken of in words
mun irundhu – right in fornt of them
muRRa – completely
thAn – he himself
thuRRiya – eaten
theRRanavum – what a shame!

pinnum uralOdu kattuNda peRRimaiyum – it is not that the girls just caught hold of his hand [as seen in the previous part]; more than that, they tied him to a mortar, an achEthana (insentient) entity. I will recount the greatness of that act too, for the entire world to hear.

kattuNda peRRImaiyum – The opinion here is that ”the sinner that I am, I did not get to see this greatness at that time itself”.  peRRimai – greatness (or fame). Here, it refers to the lowliness of the act due to viparItha lakshaNam (ironical, conveying the opposite meaning).

On top of this, I want to speak about one more activity.

annadhOr – it was such a despicable act that emperumAn put on, which cannot be described by words.

annadhu – unable to look at that grotesque form, she (parakAla nAyaki) turns her face away.

bUdhamAy – will anyone take on the role of a very lowly demon?

Ayar vizhavin kaN – since he took on the role of a demon, he went to all places because of his extreme hunger. He had to gobble up the food meant for the herdspeople who were holding on to him.

thunnu sagadaththAl pukka perunjORRai – was the quantum of food such that a couple of people could carry it and he ate that? He swallowed the food which was heaped like a mountain, brought by a huge line of carts. Just as periyAzhwAr had mentioned in his periyAzhwAr thirumozhi 3-5-1 “attukkuvi sORRup paruppadhamum thayir vAviyum neyyaLaRum” it was a combination of a mountain of cooked rice, a tank of curd and a pond of ghee which he swallowed.

muRRaththAn thuRRiya – he did not offer even a handful of food to anyone! What a glutton he was!

thAn thuRRiya – he ate it all up, without even getting his relatives together.

theRRanavum – he did not have any sense of shame even after doing all this! theRRanavu – clarity. Here, it means shamelessness.