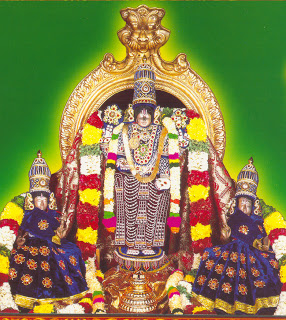 In the first pAsuram, AzhwAr says “We do not have any refuge other than kALamEgam emperumAn who has the nature of destroying the hurdles”.

(like an iron beam, resembling a shade giving branch of a kalpaka tree (a celestial tree))
nAngu thOLudai – one who is having four divine shoulders
suri kuzhal – (pacifying our sufferings, and being qualified to be the companion) having curly, dense hair

(that which speaks with a smile, to relax me)
kani vAy – one who is having friendly coral like divine lips
kALamEgaththai anRi – other than the one who is having a magnanimous form resembling a dark cloud
maRRu onRu gadhi – any other refuge which is our destination
ilam – we do not have.

To torment the demoniac persons who are the enemies, kALamEgam emperumAn is eternally residing and standing very firmly with the joy of self satisfaction, in thirumOgUr which is having fields decorated with ponds with lotus flowers having strong stem. He is having four divine shoulders, curly, dense hair, lotus like eyes and friendly coral like divine lips. Other than such emperumAn who is having a magnanimous form resembling a dark cloud, we do not have any other refuge which is our destination.