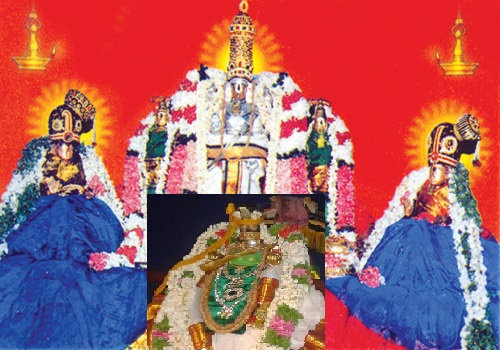 In the third decad – previously, AzhwAr became pacified mediating upon the qualities of periya perumAL; still he desired for external experience and became very distressed; considering emperumAn‘s merciful presence in close proximity in thiruppErai to subdue that distress,  highlights the following aspects:

Meditating upon these aspects, AzhwAr had great urge to reach the dhivyadhESam where such emperumAn is residing. AzhwAr informs about this desire to those caring relatives and friends who are in his close proximity. This scenario is explained as, AzhwAr assuming a feminine mood and desiring to go to his divine consort makara nedunguzhaik kAdhar emperumAn who is residing in thenthiruppErai (thenthiruppEreyil). At that time, her friends and mothers try to stop her saying “this is not proper etiquette [you have to wait for his arrival to accept you]”; she tells them “I cannot avoid going there; either you all take me there or else I will go myself” and mercifully reveals her determination through these pAsurams.

Previously, as said in thiruvAimozhi 7.2.4 “itta kAl itta kai” (foot and hand, remained wherever they were placed), parAnguSa nAyaki remained unconscious; her friends were down even before her; her mother alone called out considering her state, but gave up in the end; finally she regained consciousness and started walking. The reason for her regaining consciousness is, she sustained herself by constantly uttering the qualities of periya perumAL such as aSaraNya SaraNyathva (being the refuge for those without a refuge) etc which she seeks and the qualities of his divine form such as beauty etc, and hearing the same from her mother. The qualities are such that they will bring back life in a dead person.

After regaining consciousness, being able to think about the suffering of separation, she reached the state of not sustaining without attaining him, and due to not having that desire fulfilled , she became distressed. Her heart became captivated by makara nedunguazhaik kAdhan emperumAn who resided in close proximity in thenthiruppEreyil to subdue her anxiety, she decided “I will go to his divine abode”. As before, her friends and mothers surrounded her and said “You should not have so much love; this will lead to disrepute to us”; she replies “there is no use of your advice; my heart is captivated by him; hence, you help me go there to avoid the blame of me leaving without your consent” and informs her determination to them.

Alternatively, piLLAn explains it in this manner.

As it is said in thiruvAimozhi 7.2.11 “mugilvaNNan adiyE – ivaL aNugi adaindhanaL” (she reached the divine feet of periya perumAL only), as said in SrI rAmAyaNam sundhara kANdam 33.17 “samA dhvAdhaSa thathrAham” (I enjoyed blissfully with SrI rama for twelve years), parAnguSa nAyaki enjoyed overwhelming bliss with periya perumAL for a long time, both their individual identities will perish due to that overwhelming union unless there is a separation in between; as they are now interacting as a single [different] entity due to the union, without the separation their individual identities will be lost; at this time, emperumAn who always looks out for the survival of both the entities, proposes to separate, and as parAnguSa nAyaki does not know about separation [she has such overwhelming experience in union that she has forgotten about previous separation], she thinks “Oh! may be this is one aspect of our enjoyment together” and allows him to separate; emperumAn, leaves citing his going for hunting as the reason and she bids farewell by accompanying him up to the gate – now, the separation will show its real impact certainly; subsequently, she started anguishing; seeing this, her friends and mothers asked her “what are you thinking about?” She said “As the divine daughter of SrI janakarAja accompanied SrI rAma and enjoyed the places where he sat, stood and roamed around, I too desire to be with him where he is”. They said “that does not fit your nature of being a modest wife; your words are invalid”. She said “What is the point in your stopping me? I cannot remain here; it is better if you took me over there”. They said “We won’t agree to do that”. So she said “I will go alone if I have to”.

The words which are seen here as spoken by the mother [of parAnguSa nAyaki] are a special mood/state of AzhwAr; speaking as the divine consort of emperumAn is also a special mood/state of AzhwAr; among these when AzhwAr speaks as the mother who stops her daughter – he emphasises “what if the prAvaNyam (great love towards emperumAn) which is a natural quality of AthmA, becomes the upAyam (means) to attain him?” When he speaks as the daughter – he emphasises “as the upAyam is emperumAn only, isn’t it just natural to have prAvaNyam [great love to reach him immediately]?” Hence in these two different moods, AzhwAr himself reveals these two principles. This decad is great since parAnguSa nAyaki regained her composure and gained the ability to call emperumAn herself. 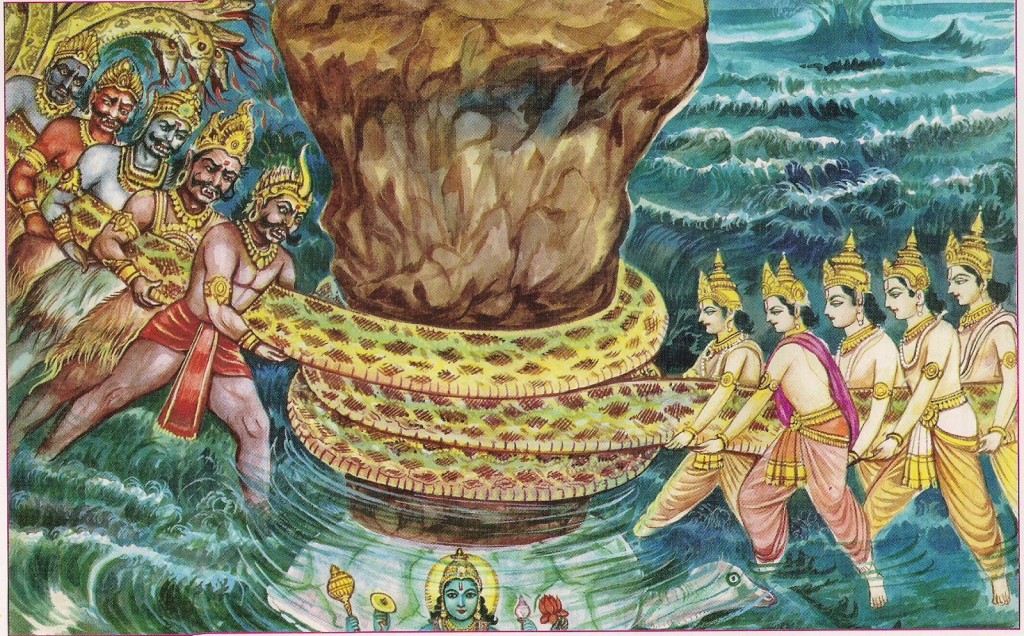 malai – manthara parvam (the mountain manthara, a celestial mountain)
Amai mEl vaiththu – atop the form of kUrma (tortoise ) i.e. on himself when he took incarnation in the form of tortoise
vAsugiyai – the serpent vAsuki
suRRi – coiling around the mountain (like a rope for churning)
Amai thAn – he himself, who incarnated as kUrmAvathAram
thalai oro kai paRRI – pressing the top of the mountain with one hand
alaiyAmal – ensuring that the water did not go out
pIRa – (nectar) to come out
kadaindha – churning (the ocean)
perumAn – emperumAn’s
thirunAmam – divine names
kURuvadhE – reciting aloud
yAvarkkum – for all
kURRu – let it become the norm for speaking

malai Amai mEl vaiththu – keeping the mountain manthara atop himself, in the form of kUrma (tortoise). In order to protect the celestial entities who were without strength, emperumAn wanted to give them nectar by churning the milky ocean, thiruppARkadal. For this, he uprooted the mountain manthara and planted it in the ocean as churning staff and started churning. When it appeared that due to the churning motion, the mountain would sink in the ocean, emperumAn took the incarnation of kUrma (tortoise) and positioned himself below the mountain. AzhwAr is referring to this.

vAsugiyaich chuRRi – coiling the huge snake vAsuki as the rope for chunring the ocean through the mountain.

Amai thAn oru kai paRRi – while the mountain was supported from sinking in the ocean, during the process of churning, it would move sideways or go to the top. To prevent such motions, emperumAn held the top of the mountain with his own hand.

alaiyAmal pIRak kadaindha – even after doing all these, dhEvas (celestial entities) and asuras (demonic entities) were not capable of churning the ocean. Hence emperumAn carried out this task too, himself.

kadaindha perumAn – we can say that by this one act, emperumAn made the celestial entities as his servitors.

We will take up the 50th pAsuram next. 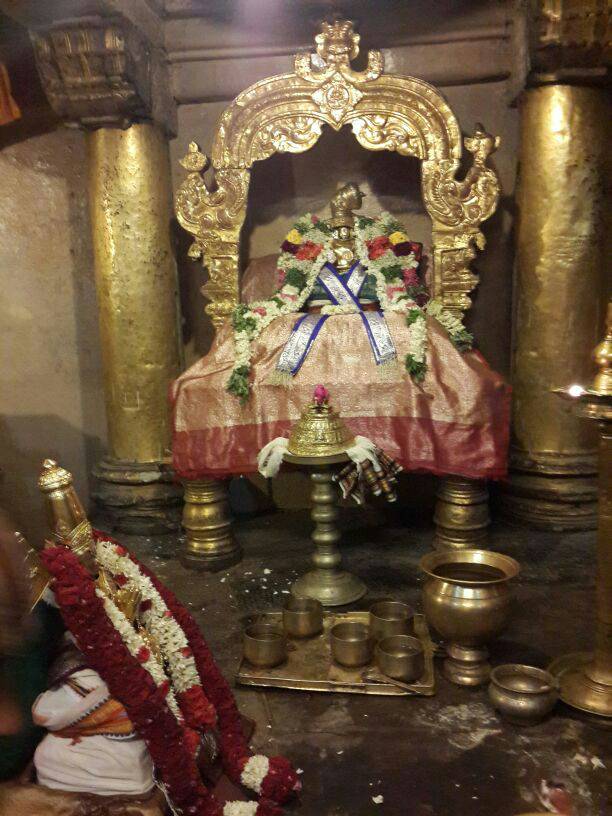