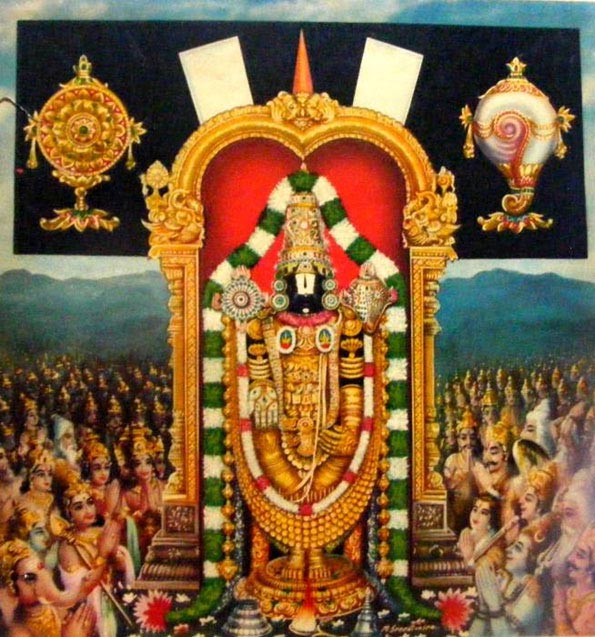 It is not that brahmA, Siva et al come to thiruvEngadam and worship emperumAn there for obtaining their desirables and removal of their undesirables. This pAsuram says that even for carrying out the daily worship (nithya thiruvArAdhanam) of emperumAn, they will bring all the implements such as umbrella etc and worship him there.

mangul thOy senni vadavEngadaththAnai – the one who has taken residence in thiruvEngadam whose peaks reach the skies. Residing as a simple entity at thirumalai where dhEvas (celestial entities) whose legs will not touch the earth, will touch the hills.

kAppaNivAn kangul pugundhArgaL – in order to carry out the ritual of warding off evils, they will enter the hills twice, at dawn and at dusk.

Who are these entities who enter at dawn and at dusk?

thingaL sadaiyERa vaiththAnum – rudhra who kept the accursed chandhra on his head. chandhra was cursed that he would lose his rays gradually by dhaksha prajApathi and surrendered to rudhra. The meaning implied here is that even those who are famous as protectors get their quality of protecting others by entering thirumalai only.

thAmarai mElAnum – brahmA who was born on the lotus shooting from emperumAn’s divine navel and who is engaged in the activity of creation. Without any distinction, both brahmA and Siva will enter thirumalai hills to worship emperumAn.

kudaiyERath thAm kuviththuk koNdu pugundhArgaL – they will enter thirumalai carrying the divine umbrella made of pearls and other necessary implements in order to carry out thiruvArAdhanam (daily divine worship of emperumAn). Reference to the divine umbrella applies to other implements such as divine fan, mirror etc.

thAm kuviththuk koNdu – bearing them. Feeling happy about carrying them to great heights in order to worship emperumAn.

kangul pugundhArgaL – they will enter during every sandhyA kAlam (the time when day and night meet, once at dawn and once at dusk). Just as brahmA had told vAlmIki that he would be able to see every activity of SrI rAma through his boon, AzhwAr too saw brahmA and Siva carrying out thiruvAradhanam  to emperumAn due to the unhindered knowledge granted by emperumAn.

We will take up the 44th pAsuram next.