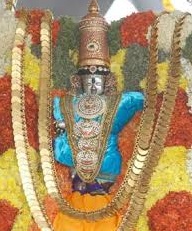 AzhwAr enjoys an event that takes place in thirumalai where kaNNapirAn (emperumAn) who has the characteristic of annihilating enemies, dwells.

Urndhu iyangum veN madhiyin – moon which is slowly moving. Since it is rubbing against the peak, due to the sharpness gained, the light emitted by the moon is bright (this implies that the peaks of thiruvEngadam rise up to the moon)

Urndhu iyangum – the white coloured moon is looking for a resting place to rid of its tiredness and is moving slowly.

oN muyalai – the beautiful rabbit which is on moon (the craters on the moon appear like rabbit and hence it used to be said that there are rabbits on moon).

Ayan puna vEngai nARum poruppu – it is the place which kaNNapirAn, the cowherd, determines to be his and where the tropical vEngai trees will emit a sweet fragrance since they are growing on their lands.

We will take up the 76th pAsuram next.