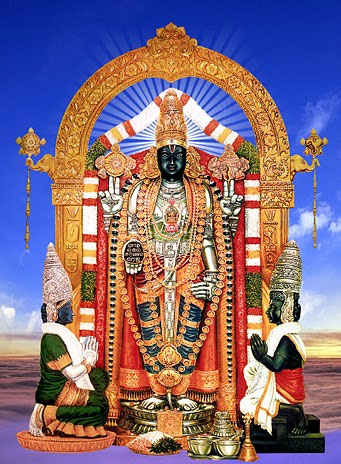 In the seventh pAsuram, AzhwAr says “Even for the greatest persons, there is no other firm refuge than him”.

Subsequently, AzhwAr says “The divine feet of sarvESvaran who has distinct forms for his devotees and others, are the popular refuge for everyone”.

(to fulfil their desire)
sirangaLAl – with their heads
vaNangum – to bow down
thiruviNNagar –  in thiruviNNagar
sErndha – descended
pirAn – sarvESvaran’s
varam – greatness of not having any thing equal or greater
koL – having
pAdham – divine feet
allAl – other than
yAvarkkum – for every sentient being
van – very strong, to give protection
saraN – refuge
illai – not there

emperumAn is having a divine form which is enjoyed by his devotees and a form of this material universe, which are shining and not shining, firm and uncertain; such emperumAn descended to be bowed down by brahmA rudhra et al with their heads in thiruviNNagar; for every sentient being, there is no other refuge than such emperumAn’s very strong, divine feet, which are having the greatness of not having any thing equal or greater.