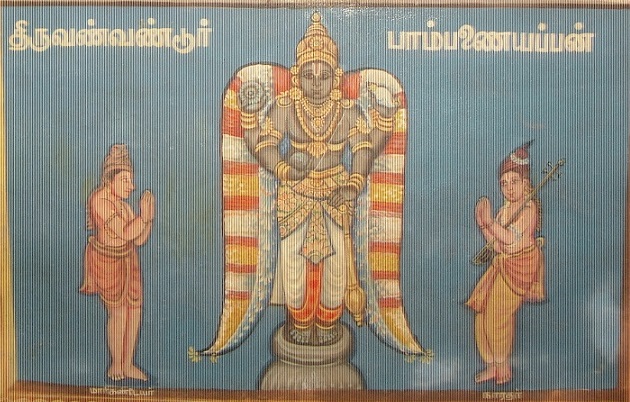 In the first pAsuram, parAnguSa nAyaki looks at some storks and requests them to go to thiruvaNvaNdUr and inform her state to the emperumAn there.

In the first pAsuram, parAnguSa nAyaki thinks “emperumAn, the lord, who showed his beauty and made me exist exclusively for him, may be focussed on something else due to the richness in thiruvaNvaNdUr”, and sends the storks which were nearby as her messengers.

(to be enjoyed by his devotees)
kai – in the hand
koL – seated
chakkaram – having the divine chakra
en – attracted me through such beauty and let me enjoy that
kani – [reddish] fruit like
vAy – having beautiful lips
perumAnai – the paramaSEshi (great lord, who accepted me as his exclusive servitor)
kaNdu – see
kaigaL kUppi – performing the action of a servitor matching his lordship
vinaiyAttiyEn – I who am having the sin which has caused this separation from him, my
kAdhanmai – great love
solleer – inform.

Oh group of storks who are appearing in front of me in the beautiful canal close to the ocean and grazing there! You go and see the paramaSEshi who is eternally residing in thiruvaNvaNdUr, where the fresh paddy grows tall and covers the fertile land, who is having fruit like beautiful lips, who is having the divine chakra seated in his hand and who attracted me through such beauty and let me enjoy that; you perform the action of a servitor matching his lordship; and you inform him about my love, I who am having the sin which has caused this separation from him. For the birds, kaigaL kUppudhal (joining the palm) means waving their wings. With this, the proximity of gatakas (AchAryas) due to being present in the same place [as we] and the activity towards the apt lord are implied.

When asked “Should I not inform him these in a poem?”,