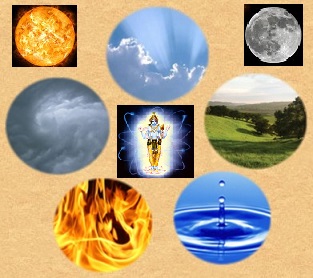 In seventh pAsuram, as AzhwAr‘s desire was not fulfilled immediately, he thought emperumAn remains silent thinking “you yourself try and reach me” and says to emperumAn “as the identity, existence etc of all entities are fully under your disposal, instead of showing this samsAram which is turning away from you, mercifully see that I reach your divine feet”.

Subsequently, AzhwAr says “You who are the antharyAmi of everyone should accept me so that I don’t see this cruel sorrow-filled world”.

(as the SarIrI (soul) will set out to eliminate the disease, etc of the SarIra (body))
nOyE – disease
mUppE – old-age
piRappE – birth
iRappE – death
piNiyE – pain (also, indicates poverty)
enRa – these individual aspects which are cause for sorrow
ivai – these
ozhiya – to eliminate
adiyEnai – me who is a servitor (of you)
kUyE koL – mercifully call and accept me;
kodu – cruel
ulagam – world
kAttEl – hide them from me (my eyes)

As you exist yourself [i.e., the in-dwelling super soul] as the movable and immovable entities without any other entity in this world, mercifully call and accept me who am a servitor (of you) to eliminate these disease, old-age, birth, death, pain (also poverty) which are cause for sorrow; hide the cruel world from me.