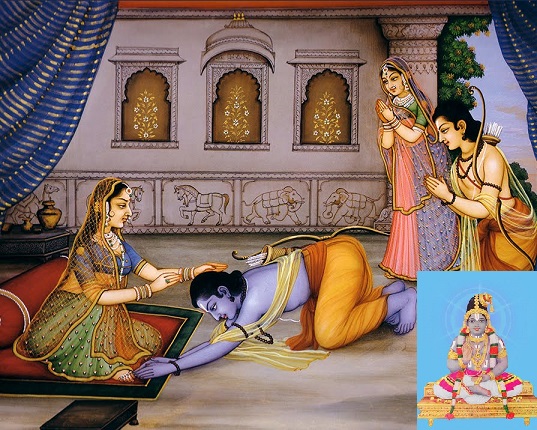 (seelamillA) AzhwAr who became bewildered out of infinite grief born out of separation from paramapurusha (supreme lord), awakening slightly after hearing bhagavAn’s divine names, unable to tolerate the grief of such separation, calls out for emperumAn saying “kANa vArAy” (come and see me, come to be seen by me).

In the seventh decad –  For AzhwAr, the awakening acquired by hearing the divine names of bhagavAn as said previously in “Eththudhalum thozhudhAdum” (praise, pray and dance), instead of helping him reach emperumAn and enjoy him, led to worsen his grief due to not reaching him; as a result, this AzhwAr who has great desire to attain him starts highlighting the following aspects of sarvESvaran who is most enjoyable:

Meditating upon these aspects, AzhwAr mercifully explains the great longing which was born out his desire to enjoy such enjoyable emperumAn.

As said in SrI rAmAyaNam sundhara kANdam 29.6 “varshENa bhIjam prathisanja harsha” (The crop which dried out due to wind and hot weather, became green on seeing the rains, similarly she [sIthA] became happy), the crop will naturally regain its freshness, AzhwAr awakened by the discussion on divine names. The instruction [by parAnkuSa nAyaki’s friend] about divine names of “vaNthuvarApathi mannai Eththumin” which is amrutha sanjIvani (medicine which gives immortality) as the pampering  awakened her; the result of that – the bewilderment was eliminated. Since in unconscious/bewildered state there is no contemplation [about emperumAn], there is no grief; but as the awakening did not lead to attainment of the goal, it caused grief and out of that grief, AzhwAr is calling out [for emperumAn]. One can tolerate hunger while asleep, but when awakened, one cannot be satisfied unless he is fed to his satisfaction. Once awakened, he contemplated upon the grief of not attaining emperumAn which could not be tolerated by him; he started thinking about

This being the case, as he did not help seeing his sorrowful situation, AzhwAr cries out with great sorrow like an overflowing ocean rising and calling out, to be heard by him even if he is in paramapadham and to make him appear in front of him at once; as occurred in SrI rAmAyaNam sundhara kANdam 28.8 “hArAma hAlakshmaNa hAsumithrE” (sIthA calls out – Oh rAma! Oh lakshmaNa! Oh sumithrA!);