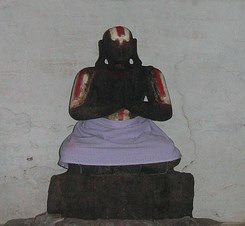 ALavandhAr, thinking about his disqualification, set out to leave emperumAn but remained due to attachment [towards him], emperumAn says “Your surrender caused by my grace is the only remedy for your disqualification”, ALavandhar realises and thinks in the line of most confidential aspect of vEdhAntham “Yes, this surrender highlighting my emptyness is the only remedy for my disqualification which is the cause for all aparAdhams (faults)” and says “Out of your mercy only, kindly remove my sins and accept me”. Alternative explanation – Since he did not attain his goal when he desired for that, he condemns himself thinking “How can I, a samsAri (mundane person), desire for this?”, but remains there due to his attachment [towards emperumAn], prays to emperumAn “Your highness should remove all sins that delay the attainment of the goal for me”. Previously he left emperumAn seeing the ultimate greatness of emperumAn; here, he approaches emperumAn thinking about emperumAn’s ultimate simplicity.

harE! – Oh my saviour who eliminates the sorrows!
aparAdha sahasra bhAjanam – being the abode of countless faults
bhIma bhava arNava udharE – in the terrible ocean of samsAra (material realm)
pathitham – fallen
agathim – without any refuge (other than you)
SaraNAgatham – me who declares to be surrendered unto you
kEvalam krupayA – only through your mercy
AthmasAth kuru – accept as yours

Oh my saviour who eliminates the sorrows! I am the abode of countless faults, am fallen in the terrible ocean of samsAra (material realm), have no other refuge and declare to be surrendered unto you; by your mercy only, you should accept me as yours.

When those who saw amudhanAr becoming happy in these ways and ask – since you (now) possess intellect and love that help reach goal, can you not sustain by yourself? –  amudhanAr replies – Due to his qualities of generosity etc., he is the protector of all people in this world, and he advised about the true knowledge – there is no sustenance for me other than the destiny of remembrance of emperumAnAr.

In the previous pAsuram – as amudhanAr becomes happy about how emperumAnAr due to his generosity placed him among the group of devotees, people near there asked – since you have got intellect and love towards them, can you not get liberated based on that? – amudhanAr replies – due to his generosity, and extreme kindness related to that, and with his calmness that helps in not getting angry when caring for all the people, he himself is the protector for one and all in this earth,  he advised true and distinguished knowledge – it is the reflecting of the fact that emperumAnAr is the protector that would get me liberated, and my intellect and love would not play a role in it.

than vaNmaiynAlum – By his generosity (which does not see (just the) greatness of meanings),
mA thagavAlum – and by his utmost kindness (which cannot bear to see the wrong paths (of the people)),
madhi puraiyum – like the moon which removes heat, and which gives delight,
thaNmaiyinAlum – by his coldness (pleasantness),
ith tharaNiyOrkatku – to the ones in this world, as said in ‘aRivinAl kuRaivilam [thiruvAimozhi – 4.8.5]’ (we do not have interest in those matters that are not liked by emperumAn),
thAn charaNAy – having himself as the protector
gyAnam uraiththa – advised the knowledge  (which is)
uNmai – true (pAramArthika).
nal – and distinguished;
irAmAnusanai – such emperumAnAr –
unnum – thinking of him as the protector –
thiNmai allAl – other than that as destiny,
maRROr nilai illai – there is no other sustenance,
enakku – for me.

vaNmaiyinAlum –  By his generosity – which lifts everyone up from this material world without focussing on greatness of meanings (to be given to them), or the weakness of such people; his generosity  which made everyone one to drink and worship SrI pAdha theertham and divine feet (respectively) by establishing in SALagrAmam, and giving away to every one the most secret/sacred meanings of charama SlOkam (respectively); as said in ‘thathvEnaya: chith  achith eeSvara thath svabhAva bhOgApavargga thadhupAya gathIr udhAra:’ (explained thathva thrayam (sentient, non-sentient, and emperumAn), and about what is to be reached, how to reach it, what is experienced after reaching it, what is its nature, place, etc.), he authored SrI bhAshyam and other granthams and helped in every way;

by such generosity of his,

What instigated such generosity?  (it is his utmost kindness: )

than mA thagavAlum – As said in ‘Evam samsruthi chakrasthE brAmyamANEsva karmabhi: – jeevE dhu:kAkulE vishNO: krupAkApyubajAyathE’ (as people are stuck in the wheel of karma, they are involved in sadness , at some rare time for some people the grace of emperumAn falls on them), and in ‘santhaptha vividhai: dhu:kai: dhurvaSairEva mAdhibhi:’ (~ he is burning (suffering) due to various types of sadness, etc.),  and due to the utmost kindness of (emperumAnAr), of not being able to bear seeing such sorry state of worldly people who have fallen down and piled up in the pit that is this material world,

than mA thagavAlum –  it is not something that came and settled in, but is by nature (than), and is most (mA) distinguished, not able to bear someone’s sorrows is the kindness – by such beautiful grace of his; 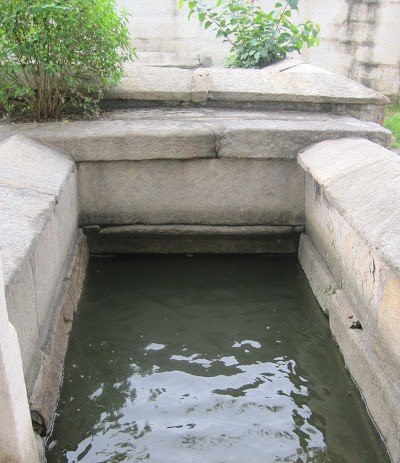 As said in ‘hari: dhu:kAni bhakthEbhya: hitha bhudhyA karOthisa: (emperumAn gives sadness to His devotees, to get them in correct path (unlike that emperumAnAr does not even give such sadness for correcting us); ,

– SasthrakShArAgni karmANi sva puthrAya yathA pithA’ (like father takes the stick to his son for correcting him (emperumAn also does the same) –  not doing just the good,  like how one would drink milk for disease of bile, emperumAnAr in all the ways is having  cold/pleasant state that is pleasant for everyone.

ith thAraNiyOrkatkuth thAn charaNAy – in these ways of qualities, what is said in ‘gurur mAthA’ (AchAryan is the mother), and in, ‘upAya upEya bhAvEna thamEva SaraNam vrajEth’ (One shall hold on to AchAryan’s divine feet as means and destiny), – by the saying of ‘svAbhimAnaththAlE eeSvarAbhimAnaththaik kulaiththuk koNda ivanukku AchArya abhimAnam ozhiya gathi illai [SrI vachana bhUshaNam]’ (due to his thinking of himself as great/ independent, he lost the hold of emperumAn, for such a person there is no refuge than the love of AchAryan) – (and so) emperumAnAr is grantor of liberation;

uNmai nal gyAnam uraiththa –  correcting advise about the most noble/required/deep knowledge in the form of real truth, and means (His divine feet), and destiny (service for His happiness);  it is said too, ‘bhajEth sArathamam SAsthram rathnAkara ivAmrutham  – sarvathas sAramAdhathyAth pushpEbhya iva shad padha:’ (emperumAn ignored lowly items and got the most noble nectar from the ocean.  Bee would take only honey from flower, emperumAnAr gave us only the most important aspects).

maRROr nilai thErndhidil . enakku illai – If we think about this very well, my knowledge and love, etc., are not there for me even a little (for getting to that state).

I who do not possess anything to get benefits, and who does not have any other saviour, my knowledge and love would not sustain me – and thus amudhanAr divines about his utmost dedication (to emperumAnAr).

vaNmai – giving the advise without withholding due to the greatness of its meanings – such generosity.

So his generosity is unique.

madhi puraiyum thNmai –  By advising about true knowledge he relieve people of their heat (from material world), and makes them understand about emperumAn’s qualities and thus makes them happy; similar to the moon which makes one calm and enjoy.

Even though emperumAn as a mother gives us in similar ways, but since He is having svAthanthriyam (independence), there may be some heat (due to our karmas); but since emperumAnAr does not have any svAthanthryam, his advice can be comforting only.

It is said as ‘sudar mA madhi pOl thAyAy aLikkinRa [periya thirumozhi – 7.1.9]’, where the moon is equated to mother in giving comfort; so it shows the quality of vAthsalyam.

So amudhanAr is thinking about three qualities of emperumAnAr – generosity, kindness, and affection. These are same as what is described of SrI ranga nAchchiyAr who is the mother for the world, as thought about by parASara bhattar in ‘audhArya kAruNikathASritha vathsalathva pUrvEshu [SrI guNa rathna gOSam].

thAn charaNAy – people of the world did not know to ask for help, nor did they have ability to feel sorry about it – so emperumAnAr by himself took up to be the protector of the world.

Since it talks being protector of the whole world, it shows there is no differentiation among the receivers.

uNmain nal gyAnam uraiththa – this shows that the protection given by emperumAnAr is his advices, and correcting the people based on that. uNmai gyAnam –  knowledge of what is , as is. nal gyAnam – knowledge that gives joy (because of giving us knowledge about emperumAn’s qualities).

irAmAnusanai .. thErndhidilE –  thinking about him who took himself up to be the protector, as the protector is the benefit/destiny, and I don’t have anything in me on which to base it, says amudhanAr.