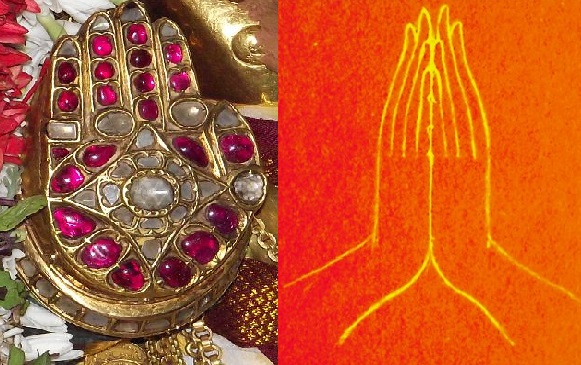 In SlOkam 22 “na dharma nishtOsmi“, ALavandhAr said “I have no favourable aspects to get your divine feet”; in SlOkam 23, he said “Not just that, I am filled with unfavourable aspects and if such person like myself gets your divine feet, that is by your grace only”; in SlOkam 24, he said “if hurdles trouble me who is fully surrendered unto you, it will be a blemish in your greatness”; in SlOkam 25, he said “if you disregard that aspect and abandon me also, I have no where else to go”. Now, emperumAn asks “Do you think that the physical surrender you performed in SlOkam 22 ‘thvath pAdham mUlam SaraNam prapadhyE‘ would be sufficient?” and ALavandhAr replies “Why? Do I need to perform surrender through my mind, speech and body [together]? As said in SrI rAmAyaNam yudhdha kANdam 18.27 ‘badhdhAnjaliputam dhInam yAchantham SaraNAgatham | …’ (Oh torturer of enemies! Even if an enemy performs surrender by joining his palms or by his mind or by prayers through speech, one should not hurt him to avoid acquiring the bad reputation of “He is merciless”), is an anjali (joining the palms and praying) not sufficient?”.

If an anjali (joining the palms [indicating physical surrender]) is performed by any one at any time in any manner, immediately that removes the sins without a trace; nurtures auspicious aspects;  [such auspiciousness] never diminishes.