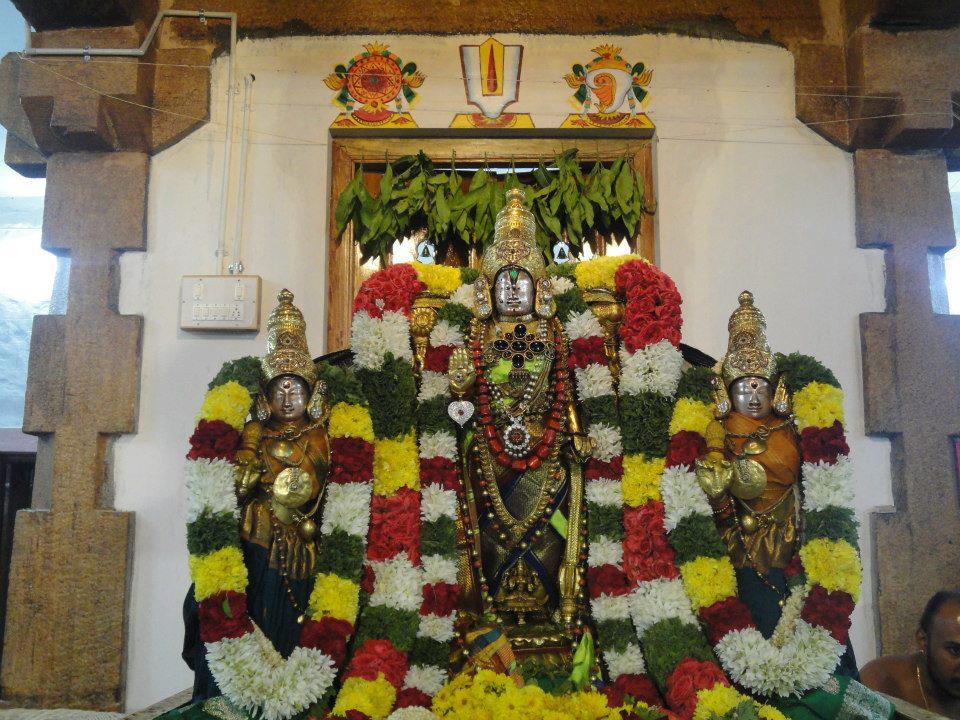 In first pAsuram – AzhwAr says “Emperors will [one day] lose their kingdom and miserably live by begging. This being the case,  approach the divine feet of thirunArAyaNan (SrIman nArAyaNan) who is eternally wealthy, and be uplifted”.

(when that wealth got destroyed, they went to beg in the night out of shyness [to go in day time when there is light])
karu – black (unable to distinguish from the darkness)
nAy – by a dog
kavarndha – bitten
kAlar – having leg
sidhaigiya – (useless) broken and discarded
pAnaiyar – having that as the pot for begging
peru nAdu – by the people of this great earth (which was once ruled by them)
kANa – to be seen
immaiyilE – in this birth itself
pichchai – alms
thAm – themselves (asking after giving up their shame)
koLvar – will accept;

Those emperors who are conducting supremely independent empire, fitting firmly in the world and protecting their kingdom, (when their wealth gets destroyed, would beg in the night) have their leg bitten by black dog , having a broken and discarded pot (shell/skull) for begging, will accept alms themselves to be seen by the people of this great earth (which was once ruled by them). (Since aiSwaryam (worldly wealth) is temporary,) meditate upon the eternally wealthy lord nArAyaNan’s divine feet immediately, without wasting any time and be uplifted.

What is being ruled?

What will such independent emperors, who ruled the world for too long,  do? AzhwAr says they will suffer after losing their kingdoms as said in “rAjyam nAma mahA vyAdhi rachikithsyO vinASana: | bhrAtharam vAsuthamvApithyajanthi bhUmipA: ||” (kingdom is an uncurable and disaster-causing disease; don’t people even give up brothers and sons for the sake of kingdom?).

Does this transformation happen in a subsequent birth?

This being the worth of worldly kingdoms,