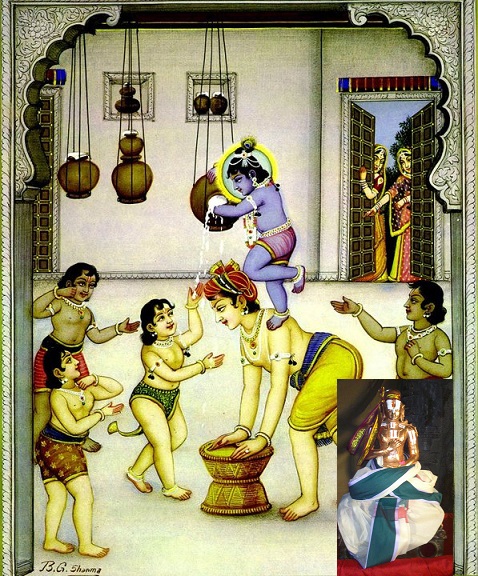 AzhwAr becomes distressed in separation from emperumAn and prays to him “Out of your unlimited compassion, you should forgive all my mistakes and mercifully accept service from me “. emperumAn too accepts AzhwAr’s prayers and comes to AzhwAr to be together with him.  At that time AzhwAr observes emperumAn’s greatness and thinks “I am such a lowly person and he is so great – if I serve him, it will only bring disrepute to him – so instead of serving him, causing him disrepute and uplifting myself, it is better not to serve him and meet his end. So, let me move away from him”, gives up service to the lotus feet of the supreme lord and is scolding himself for not realising this earlier.

In fifth thiruvAimozhi (padhigam/decad) – After AzhwAr informs his state through gataka (AchArya/messenger) to emperumAn, emperumAn appears to the full satisfaction of AzhwAr as mentioned in thiruvAimozhi 1.4.11 “aLaviyanRa Ezhulagaththavar perumAn kaNNan”  with both his swAmithvam (supremacy  as in Ezhulagaththavar perumAn) and sauseelyam (simplicity in kaNNan). AzhwAr desiring to sing about sarvEsvaran‘s niravadhika sauseelyam (infinite simplicity), meditates upon emperumAn’s sarvEsvarathvam (being supreme to everyone), sarva kAraNathvam (being the cause of everything), asEsha jana samslEshaththvam (being together with everyone), vibhUthidhvaya nirvAhakathvam (being the controller of spiritual and material realms), AsridhArththa pravruththi (engaging in activities for his devotees), svabhAva nAma yOgam which is bhOgyam (having most enjoyable names), bhOgyathA prakAsaka saulabhyam (his easy approachability which highlights his enjoyable nature), Asritha vishaya vyAmOham (being mad for his devotees), sarvAthma vathsalathvam (having motherly forbearance towards all AthmAs) and Asritha upakAra adhisayam (his greatly helping his devotees). Thinking that he is very lowly and that it will not be appropriate for him approach such great emperumAn, he tries to move away from him. emperumAn shows his simplicity and AzhwAr enjoys that quality of emperumAn and subsequently still tries to move away, emperumAn shows his “hEyaprAthipatyam” (being opposite/destroyer of defects) and “Asritha vyAmOham” (great love for his devotees). AzhwAr then becomes satisfied after realising emperumAn’s upakArakathvam (helping others) and pArippu (emperumAn’s desire) towards him.

Previously, AzhwAr sending messenger, due to suffering in separation, is out of love. Here trying to move away from emperumAn is out of wisdom.  After hearing AzhwAr’s message, emperumAn instantly arrived just as he came for the rescue of gajEndhrAzhwAn. At that time, AzhwAr observes emperumAn’s greatness and his own nature of being bound in material body currently. He starts thinking “this form of emperumAn is for the pleasure of nithyasUris et al – it would be inappropriate if I approach him. So, let me move away”. Would he survive if he moves away from emperumAn? No – he will surely meet his end. But those who seek out glories for their masters would not give importance to personal losses. When srI rAma and the dhEva dhUtha (heavenly messenger) were discussing – dhurvAsa rishi wanted to enter the private quarters immediately. lakshmaNa feared that if he stopped dhurvAsa, he may curse him and  that will cause pain in srI rAma’s heart. So, he decided to enter the room himself and accept the punishment (Previously the dhEva dhUtha had said anyone entering the room during their conversation would have to be given death punishment). Similarlly, when sIthA pirAtti was dropped off alone at the banks of gangA by lakshmaNa, she also says “I am holding on to my life only for the progeny of srI rAma that I am carrying”.

AzhwAr thinks that if he tries to approach emperumAn, who is enjoyed by nithyasUris, it would cause embarrassment for emperumAn, just like throwing junk in a pond (which is useful for everyone) or mixing poison in nectar. Hence AzhwAr starts moving away from emperumAn. emperumAn, thinking “Oh! we cannot lose him”, asks AzhwAr “AzhwIr! Are you trying to leave me?” and AzhwAr replies “yes”. emperumAn says “You are leaving me thinking that your service would cause embarrassment to me. But if you leave like that, everyone will think that I am approachable by highly qualified persons only and no one will come to me. But if you. who consider lowly about yourself, approach me, then everyone will think that all can approach me. Thus your leaving me will cause real embarrassment for me. It has been established that no one is disqualified to approach me. I have touched everyone irrespective of his qualities by touching everyone’s head with my lotus feet while measuring the worlds”.  At that time, AzhwAr, instead of approaching emperumAn, thinks that if emperumAn gets more glorification due to his approach, that also is not correct [since that may mean that he did not have such glorification before] and thus tries to leave. emperumAn then says “While you don’t want me to get more glories by your approach, would you not want me to sustain myself which can only happen by your being together with me?” He says “Your association with me is like my having butter in AyppAdi (gOkulam) – that is my sustenance. If you leave me, that is like someone taking butter away from me in gOkulam – if you leave me, you will also go to the same place (hell) like those who took butter away from me in gOkulam. My sustenance will become impossible in your absence”. AzhwAr says that emperumAn convinced him at the end, to engage with him, just as emperumAn said with respect to vibhIshaNAzhwAn in srI rAmAyaNam yudhdha kANdam 18.3 “mithra bhAvEna samprAptham…” (Even if one approaches me with a friendly mood [without any deep love], I will never fail him) – even if the other person is filled with defects, If I fail him, my existence will be questioned and just as emperumAn convinced arjuna (who did not want to fight with his relatives) to say “kaishyE vachanam thava” (bhagavath gIthA 18.73 – I will follow your orders [and fight right now]),

One thought on “thiruvAimozhi – 1.5 – vaLavEzh”