(adiyEn) wore in my head, as a decoration, the two beautiful divine lotus feet of amudhanAr of mUngil kudi; (so) as my accumulated karmas are decimated, why would adiyEn be answerable to the yaman, etc., of the south side?

Dear mind! Please agree to recite the rAmAnusa nURRanthAdhi that is made of kaliththuRai anthAdhi (grammar for a form of thamizh poetry), created by thiruvarangaththu amudhanAr who is having ever growing bhakthi (devotion) towards rAmAnujar who has got the greatness of getting victory to those who reached him and followed based on his advice that the enjoyment given by the senses are useless, and kept their minds away from it.

Oh rAmAnuja who won over the other six philosophies! As the dear disciple thiruvarangaththu amudhanAr performs vAchika kainkaryam to your divine feet by keeping in his mind the (108) pAsurams created with beautiful words, adiyEn plead that such name of yours (from these 108 pAsurams), be also set in my tongue at all times – day and night.

With us having the essence of sAvithri manthra which itself can be said as the essence of all the vEdhas, which could be suitably named as prapanna gAyathri, with all the one hundred and eight pAsurams having the divine name ‘rAmAnujan’, that is provided to us which is a great help of amudhanAr, there is no deficiency for us in this and the other world.

pAsuram words are to be arranged as – virtuous thiruvarangaththu amudhan gave us the kaliththuRai anthAdhi using the names of emperumAnAr, so what problems do we have from now on? 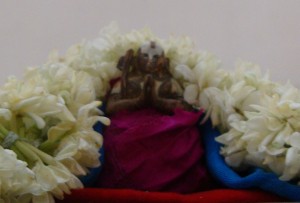