emperumAn in the form of varAha secured the very cool, vast earth, on his bent tusk; the abode for such emperumAn who performed yOga nidhrA in the great ocean which is black and cool, is the dhivyadhESam known as thiruvahindhrapuram where swarms of beetles gathered and drank honey in the beautiful lotus flower, sang beautiful tunes and joyfully danced, went and reached the serundhi tree’s freshly blossomed flower in the middle of the garden, and were roaming.

irum thaN mA nilam – mA nilam indicates vast earth; hence thaN indicates the earth being the place where enjoyment, the tools of enjoyment and the abode of enjoyment are shown well; irum – greatness. When such earth was consumed by deluge, in his divine heart, the form which will be useful for the AthmAs, is only present.

Enam adhAy – As he understood the goal, he minimized his stature. He assumed the varAha form which will not hesitate to enter water and mud. He held the earth in a corner of his bent tusk. With this, emperumAn the protector, being greater than what is to be protected, is explained.

As he realised in his divine heart that he has secured the earth,

karum thaN … – It is well known that he is present in every ocean. Due to that, he is said here as in mUnRAm thiruvandhAdhi 37 “uvarkkum karu kadal nIruLLAn” (He is present in the salty ocean which is dark). Alternatively, it can be said that thiruppARkadal (milk ocean) became a dust in the lotus feet of mahA varAha.

kamalam … – The beetles will enter the distinguished, blossomed lotus flowers and drink honey; having drunk honey till their necks, due to the overwhelming joy, they will hum sweet music. They will hum in a pleasant way for others to hear. Due to the honey which has gone in, it will not let one in a stable posture; as the beetles consumed the honey in the lotus flower, due to overwhelming desire, thinking that they can drink more honey from serundhi tree, meditating upon its honey, just like those who would seek to enter a flooded river, will hold hands with others with similar intent, they also gather together.

podhuLi – The flowers will wait till all the beetles enter and will beautifully blossom. pozhil UdE – in the garden, they will reach the fresh flower in the serundhi tree.

podhuLi – They will gather together and roam around. The beetles which entered the lotus flower due to the desire towards it and drank the honey, think about the overflowing honey in serundhi tree; thinking “it is not good to get caught, without analysing”, just as those who would fear to enter the flooded river, will roam around, reaching serundhi flower, fearing to enter in there, would remain on the banks and roam around here and there.

podhuLi – Abundance. This can also be seen as an attribute of the garden. 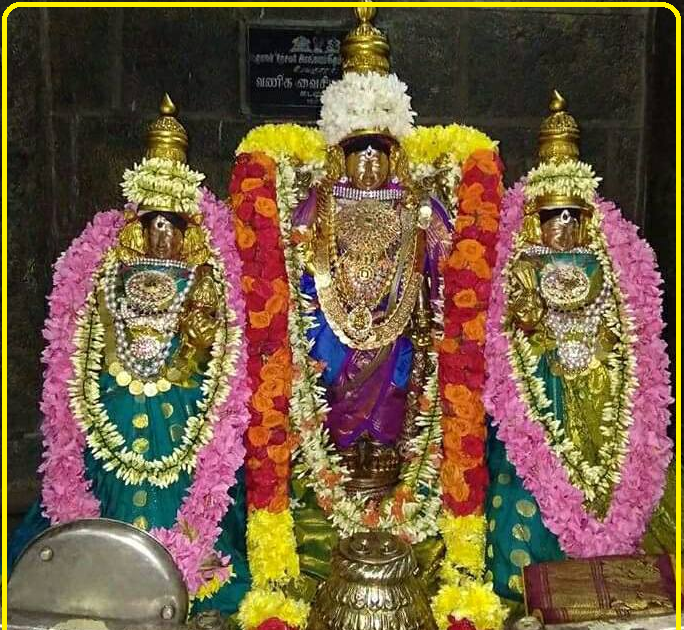 Poets would usually bring out the speciality of each place and glorify the same; unlike that, AzhwArs who speak the truth, explain certain aspects about dhivyadhESams which are dear to empeumAn and we don’t see what were highlighted by them; the reason for that is – we should know that there is no boundary to their love; though one’s son may be ugly, due to love, he will appear more beautiful than the children of others; similarly, as there is no boundary for their pleasure and these pAsurams are on sarvESvaran who can be glorified in any manner, there is no concern. Since there is no boundary for love which is the cause, there is no shortcoming in having everything occurring as a result of that.

Previously, AzhwAr meditated upon emperumAn who is present in paramESvara viNNagaram where even pallava king who has abundance of rajO guNam, surrendered . Unlike that, AzhwAr meditated upon emperumAn being present in thirukkOvalUr where he is upAsya (target of upAsana) for brAhmaNas who are filled with sathva guNam, and who continuously perform activities matching self’s varNam and ASramam as part of their worshipping of bhagavAn; instead of considering bhagavAn to be antharyAmi of dhEvathAs and surrendering unto him in that manner, just as emperumAn would eliminate the deluge which occurs occasionally and protect the same, and would present himself to the nithyasUris to be seen by them always, for those favourable ones who surrender unto him only, since this thiruvahIndhrapuram is the abode where he is standing, to understand and see everything he has and surrender unto him who is immeasurable to be measured thinking “He is in this state”; thinking such abode to be the goal, AzhwAr is meditating upon the same and enjoying it  since there is no boundary for estimating him.