ErAr pozhil sUzh idavendhai – thiruvidavendhai (a dhivyadhEsam near present day mAmallapuram) has beautiful gardens around it so that emperumAn, who has taken the form of wild boar in this dhivyadhESam, can roam around, as an outlet, in line with his form. The emperumAn is residing in this divine abode to reflect his infatuation with bhUmippirAtti, just as mentioned in thirunedundhANdagam 18 “pArvaNNa madamangai paththar” (one who is infatuated with bhUmippirAtti). I will go there, inform the people as to how he tortured me, a servitor of pirAtti and ask them to decide for themselves whether the affection which he shows towards bhUmippirAtti is real or an outward show, thus subjecting his love to a measurement.

nIrmalai – just as it has been said in thirunedundhANdagam 18 “nIrvaNNan nIrmalaikkE pOvEn” (I will go to thirunIrmalai itself where he is manifesting his characteristic of being simple, like water), thirunIrmalai is the divine abode which acts like shadow for those who have lost their self-restraint while trying to attain him so that they could take comfort. I will tell them to see in my form as to how I, who am engaging in madal after losing my self-restraint, am unable to enter that abode too.

sIrArum mAlirum sOlai – emperumAn remains without moving, like a tree, in the southern direction, which was not regarded highly in ancient days by vaidhikas (those who follow vEdhams) and manifests his simple and easily approachable qualities to lowly people too, as brought out in periyAzhwAr thirumozhi 5-3-3 “punaththinaik kiLLip pudhu avi kAtti un ponnadi vAzhga enRu inakkuRavar pudhiyadhu uNNum ezhil mAlirunjOlai endhAy” (Oh one who is residing in thirumAlirunjOlai and who is my lord! The hilly tribal people offer freshly plucked millets to your divine feet, and without asking for any other benefit, worship you and eat the offered millets). I will go there, show my form and establish that his qualities are one of supremacy (and not simplicity) and of being tough to approach and not easily to approach.

thirumOgUr – isn’t this the divine abode for emperumAn who is blissful with his devotees, without any distinction, through the faculties of mind, body and speech, just as it has been mercifully mentioned in thiruvAimozhi 10-1-6 “thirumOgUr Aththan” (one who has taken residence at thirumOgUr and is trustworthy)? I will show how trustworthy he is, after going there. 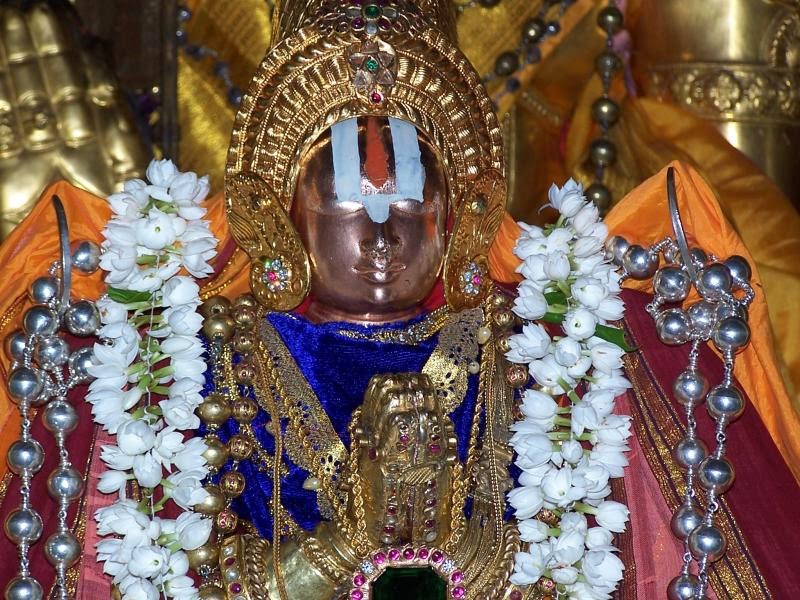 In ashtAksharam, also known as thirumanthram, which has completeness both in words and in meanings, the middle word nama: has a greatness. madhurakavi AzhwAr’s wondrous composition kaNNinuN chiRuththAmbu has the same greatness. Understanding the meaning of this, the revered AchAryas (preceptors in our sampradhAyam) added this to the aruLichcheyal (recitation of 4000 dhivyaprabandham) so that it could be recited along with the rest.

The simple translation for this prabandham is written with the help of our pUrvAchAryas’ commentary.

Only madhurava AzhwAr who said “I do not know anything other than nammAzhwAr who mercifully composed the meanings of vEdhas in thamizh, who is the leader of the beautiful kurugUr and who is capable of uplifting us all” rules over us. He is the refuge for prapannas (those who have surrendered) like us.

kaNNan emperumAn, who is my swAmy (lord) and the supreme entity, made himself to be tied by yaSOdhAp pirAtti, with small pieces of rope, which were thin. Instead of that emperumAn, it is very sweet and nectarean to my tongue to recite the name of nammAzhwAr who is the leader of thirukkurugUr, which is in the southern direction.

Second pAsuram. madhurakavi AzhwAr explains that nammAzhwAr’s pAsurams alone are very sweet for him and that he is sustaining himself by repeatedly reciting them.

I became very blissful by reciting AzhwAr’s pAsurams with my tongue. I have surrendered well at his divine feet. I do not know of any God other than AzhwAr who is complete with auspicious qualities and who is the leader of thirukkurugUr. I will go to various places by singing AzhwAr’s pAsurams, set to music.

Third pAsuram. madhurakavi AzhwAr narrates joyfully as to how emperumAn gave him his dharSan (manifesting his divine form) because he is a servitor of nammAzhwAr.

I, who was AzhwAr’s servitor totally, slipped from that position. I saw SrIman nArAyaNa, who has a dark complexion and who is the leader of nithyasUris, as shown by AzhwAr. Look at the great benefit that I received, being the true servitor of AzhwAr, who incarnated in the magnanimous thirukkurugUr.

Fourth pAsuram. Looking at the benefit showered by nammAzhwAr on him, madhurakavi AzhwAr says that he should desire whatever nammAzhwAr liked. Further, he reveals his lowliness and how nammAzhwAr accepted him.

Those who are very learned in the four vEdhas and who have eminent activities to go with the knowledge, gave up on me since I am the epitome of lowliness. However, nammAzhwAr, took me under his refuge, as my mother and as my father. He alone is my lord.

Fifth pAsuram. Explaining his lowliness that he had mentioned in the previous pAsuram, madhurakavi AzhwAr reveals how he has now become rectified due to the causeless mercy of nammAzhwAr and thanks him.

In days gone by, I used to covet others’ wealth and women. However, now, I have attained eminence since I have been corrected by nammAzhwAr, and have become his servitor. Such nammAzhwAr is the leader of thirukkurugUr which has golden mansions

Sixth pAsuram. When asked “How did you attain such eminence?” he says that he attained it because of the grace of nammAzhwAr. There is no scope for falling from this position.

Being the leader of thirukkurugUr, my swAmy (lord) nammAzhwAr showered his mercy on me such that I will sing his greatness. You can see that he will never ever let go of me.

Seventh pAsuram. madhurakavi AzhwAr says that having been graced by nammAzhwAr, he will explain the greatness of nammAzhwAr to all those who are suffering since they have not known about nammAzhwAr and have not been showered with his grace, and get them too prosperity.

nammAzhwAr, also known as kArimARan, being the son of poRkAri, showered his grace on me and took me under him in his service. He removed my sins which have been there from time immemorial. I will explain the greatness of the mercy of such AzhwAr who had composed wondrous thamizh pAsurams, to the people in all eight directions.

nammAzhwAr mercifully composed the thousand pAsurams of thiruvAimozhi as the essence of vEdhas, for the joy of emperumAn’s servitors, who praise emperumAn. This mercy of nammAzhwAr’s is greater than anything else.

Ninth pAsuram. madhurakavi AzhwAr says that nammAzhwAr, without minding madhurakavi AzhwAr’s lowliness, revealed to him the essence of vEdhas which is that one should be a servitor to emperumAn’s servitor. I will be forever indebted to him, he says.

nammAzhwAr mercifully told me the essence of vEdham which is recited by great scholars, such that it would firmly remain in my heart. As a result of this, I realised this eminent state of being his servitor.

Tenth pAsuram. In this madhurakavi AzhwAr says that nammAzhwAr has showered very eminent benefits on him which he could not repay appropriately and develops great affection towards nammAzhwAr’s divine feet.

Oh nammAzhwAr who resides in thirukkurugUr which is surrounded by gardens in which the sounds of cuckoo birds reverberate! You are involving people of this world in servitude [to emperumAn] by correcting them through your instructions and activities even though there is no benefit for you from them. I am trying to develop affection towards one such as you.

Eleventh pAsuram. In this, madhurakavi AzhwAr says that those who learn this prabandham will [reach and] reside in SrIvaikuNtam which is under nammAzhwAr’s control. The implied meaning is that while in AzhwAr thirunagari both AdhinAdhar (the presiding deity in the temple) and nammAzhwAr are leaders, it is only nammAzhwAr who is the leader in SrIvaikuNtam. 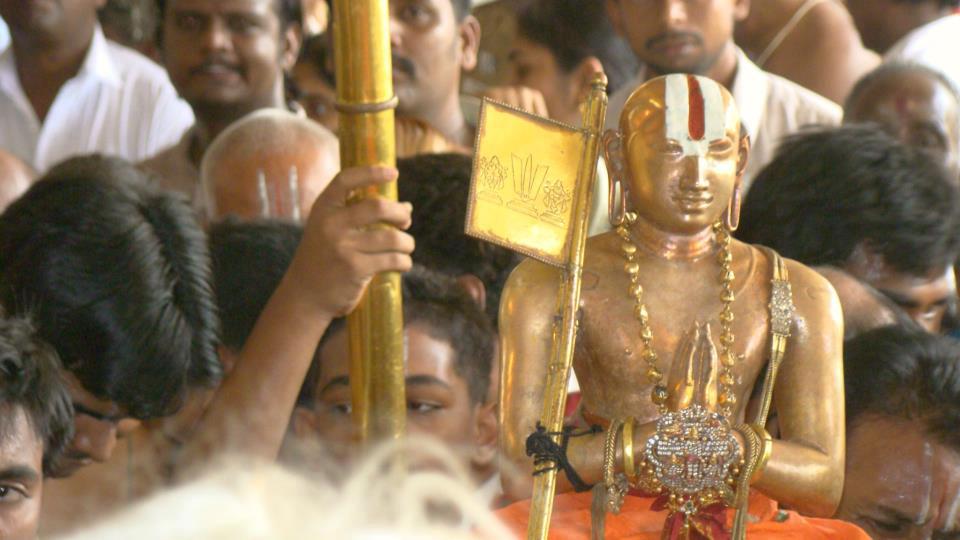