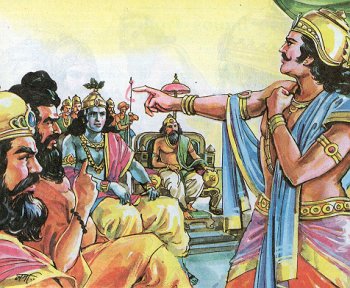 I will narrate another incident, please listen.

mannar perunjavaiyuL – was it at a non-descript place where his simplicity was exposed? Was it not in the court where great kings had gathered that this happened?

vAzhvEndhar thUdhanAy – agreed that he had to go as a messenger. But did he go as the messenger of great emperors who rule over the world? Was it not for pANdavas who were struggling with their lives that he went as a messenger? Who will get such a fame!

thannai igazhndhuraippa – such that dhuriyOdhana would ask him derisively “Disregarding bhIshma, dhrONa and me, why did you eat the food of the lowly person (vidhura)?”

thAn – For someone who did such an act, where is the need for any respect to feel important? (thAn indicates self)

muna nAL senRadhuvum – Is he comforting himself that a long time has passed since this event took place? It appears to me that this happened yesterday!

More than this, hear this ludicrous incident as I narrate it:

mannu paRai kaRanga – since no one would come to support him in this shameless act, he tied a drum to his waist itself.

Did he not indulge in an act which any self-respecting elder would not even think of!