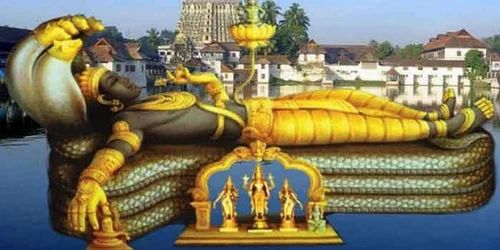 In the eighth pAsuram, AzhwAr invites SrIvaishNavas saying “Please go to thiruvananthapuram to see the divine feet of sarvESvaran who is mercifully resting there”.

kadu vinai – cruel sins (which are the reasons for delay in attaining the result)
kaLaiyal Agum – can be eliminated
kAmanai – kAma (cupid, who is famous for his beauty)
payandha – one who created
kALai – krishNa who did not lose his youth (even after that)
ida vagai – as his abode
koNdadhu – had
ezhil – beauty
aNi – having
ananthapuram – thiruvananthapuram
enbar – is said;

(there)
padam udai – having hoods (which are expanded due to being in contact with emperumAn)
aravil – in the divine serpent mattress
paLLi – in mercifully resting
payinRavan – of the one who is very involved
pAdham – divine feet
kANa – to see and enjoy
namargaL uLLIr – oh our people
nadaminO – start walking;

(not having to think that no one informed)
nAm – we (who know the greatness of emperumAn)
umakku – for you
aRiya – to know
sonnOm – have told.

Cruel sins can be eliminated. It is said that krishNa who did not lose his youth even after creating kAma, is having beautiful thiruvananthapuram as his abode. Oh our people! Start walking towards such thiruvananthapuram to see and enjoy the divine feet of the one who is very involved in mercifully resting on the divine serpent mattress with hoods. We have told this for you to know.

Just as declared in the vEdhas as “Only till such time I am not released from the bondages of samsAra, I cycle in this samsAra. The day I earn bhagavAn’s grace and get released from this cycle, I attain verily that supreme brahman and prosper”, bhagavAn knows and waits for the right time to grace each one of his dear devotees, and finally unites with such devotees in SrIvaikuNtam and also gives himself to them for mutual enjoyment. Thus, he is called ‘havi:’. The root ‘hu’ (हु) means to exchange – give and take. It gets the ‘isi:’ (इसिः) adjunct per grammatical rules, resulting in the word ‘havi:’.

Furthermore, bhagavAn only dispels all obstacles in the way of attaining him, and hence he is called ‘hari:’ – the one who steals (removes) the obstacles.

Since bhagavAn thus gives himself to his devotees, unites with such dear devotees, and also dispels obstacles in the way of such union, he is called ‘havirhari:’.

“hari steals (clears off) all sins of his dear devotees, even if they were known to be the most evil minded souls before, although they did not yearn for such divine grace. This is like fire displaying its nature of burning although touched without knowledge”.

‘havirhari:’ is thus a single name, and not two names.

bhagavAn himself declares thus: “I accept a part of the fire oblations, and hence called ‘hari:’. Also, I am called ‘hari:’ due to my greenish hue”.

Since bhagavAn thus accepts the oblations (havis) in the sacred fire, he is called ‘havirhari:’.

Alternately, since bhagavAn accepts the oblations given in the sacred fire (directly as well as in the form as indweller of lower demigods to whom such oblations may be directed), he is called ‘havirhari:’.

Thence, bhagavAn vAsudhEva’s form as the consort of SrI mahAlakshmi is hailed. bhagavAn possesses an auspicious divine body showing insignia of great prosperity due to his constant embracing of his consort SrI mahAlakshmi. Hence he is called ‘sarva-lakshaNa-lakshaNya:’ – the one who possesses all auspicious insignia.

Such divine auspicious insignia are shown in the scriptures thus:

Etymology: sarva-lakshaNa-lakshaNya: is the one who sports the insignia of his divine union with SrI mahAlakshmi.

Thus he is also called ‘lakshmIvAn’ – the one who is eternally united with SrI mahAlakshmi.

“When I held the hand of SrI mahAlakshmi in marriage (to enact our marriage for all individual souls to enjoy), I playfully disclosed her eternity just like myself (without another cause). I have taken shelter in her ever since, and she has sought my refuge. So we are mutually inseparable for eternity”.

The word ‘prakruthi’ in this sloka verily refers to SrI mahAlakshmi, who is the mother of all worlds.

Etymology: Since bhagavAn is ever united with SrI mahAlakshmi, he is called ‘lakshmIvAn’.

Ever united with SrI mahAlakshmi who is the mother of all worlds, bhagavAn becomes the father of every entity. Since the duo thus takes on the responsibility of their children (individual souls born in this creation) in bestowing all happiness upon them, and dispelling the confusions from their minds regarding their eternal natural subservience unto them, bhagavAn is called ‘samithinjaya:’ (read as samitinjaya:).

As the manthra varNas hail, bhagavAn is the one who wins over all sorrows of his devotees (in terms of confusions regarding their subservience, and all other types of obstacles that stop them from attaining him).

Etymology: Having united with SrI mahAlakshmi, since bhagavAn dispels the confusions from the minds of his dear devotees regarding their eternal and natural subservience unto the duo, and thus since he dispels the root of all their sorrows and bestows all auspiciousness, he is called ‘samithinjaya:’.

As described hitherto, since bhagavAn never lets his love towards his dearest devotees diminish, he is called ‘vikshara:’.

Etymology: Since bhagavAn’s divine love towards his devotees said hitherto never diminishes, he is called ‘vikshara:’.

bhagavAn possesses a reddish hue as in the calyx of a beautiful lotus flower, due to his eternal union with SrI mahAlakshmi. Hence, he is called ‘rOhitha:’ – the one with a beautiful reddish hue.

Etymology: Since bhagavAn possesses a reddish hue as in the calyx of a lotus flower, he is called ‘rOhitha:’.

Since he is sought by all of his dear devotees, he is called ‘mArga:’ – the one who is sought after.

As said in the manthra varNas, bhagavAn is the one who is most liked by the devotees.

Etymology: The one who is constantly sought after by his devotees for fulfilling all their desires is called ‘mArga:’.

bhagavAn is also called ‘hEthu:’ since he remains as the cause for the fulfillment of such desires of all of his dear devotees.

The root ‘hi’ (हि) refers to movement, which gets the ‘thu:’ (तुः) adjunct, resulting in the divine name.

Etymology: Since bhagavAn bestows the desired fruits upon all devotees and thus remains the cause for all their attainments, he is called ‘hEthu:’.

Since all the worlds (dhAmAni) reside in the belly of bhagavAn, he is called ‘dhAmOdhara:’. This divine name represents his disposition as primordial creator with SrI mahAlakshmi. The scriptures say thus: “The worlds by name ‘dhAma’ shine forth in his belly, due to which he gets the name ‘dhAmOdhara:’”.

Alternately, he is called dhAmOdhara: since he bestows happiness upon all the dhEvas. The word ‘dhAma’ in this context refers to bliss.

Also, he is called ‘dhAmOdhara:’ since he was tied with a rope in his belly by his mother yaSOdha to a grinding stone. The word ‘dhAma’ in this context means a rope.

Thus, although highly clever as loved by even SrI mahAlakshmi herself, bhagavAn voluntarily gets bound by his dear devotees (like yaSOdha, and other gOpikas) in their faultless devotion. He stands tied to a grinding stone with tears rolling down his cheeks, and thus displays his incomparable simplicity, although being the only supreme entity. This divine name shows this extraordinary simplicity and affection of bhagavAn.

Although being the consort of verily SrI mahAlakshmi herself (indicating his absolute supremacy), since he happily puts up with all the tying, scolding, threatening etc by yaSOdhA, he is called ‘saha:’ – the one who endures.

Etymology: Since bhagavAn endures the acts of tying, scolding etc by yaSOdha, he is called ‘saha:’.

vAy thiRappa – as he asked, opening his mouth
avanum – that mahAbali (who heard that)
ennAl tharappattadhu enRalum – as he said that “the three steps of land have been given by me”
aththuNaikkaN – at that very moment
min Ar mudi pOy viN thadava – the radiant crown went and stroked the ethereal layer
mEl eduththa – that which was lifted high up
pon Ar kanai kazhal kAl – the coveted divine foot, decorated with valorous anklet and making a sound
Ezh ulagum pOy kadandhu – going across all the worlds above

tharuga enRu vAy thiRappa – who will not soften when he (emperumAn as vAmana) opens his radiant mouth?

maRRavanum – this implies that mAvali, who was fully engaged in the beauty of vAmana opening his radiant mouth and in the sweetness of the speech, changed into a totally new person, just as gold is changed by being melted in a furnace [and is purified fully].

ennAl tharappattadhu enRalumE – just as SrI rAma said in SrI rAmAyaNam yudhdha kANdam 18-34 “dhaththamasyAbhayam mayA” (refuge has been granted by me to vibhIshaNa) and in 18-35 “abhayam sarva bhUthEbhyO dhadhAmi” (I grant refuge from all creations), mAvali said “I have given already”. Since he had already taken a vow that he would grant whatever anyone asked for, he says that he has already given it.

aththuNaikkaN – vAmana started growing at that very moment and started measuring [all the worlds] since the one who had granted his wish, being a demon, could change his mind any time.

minnAr maNi mudi pOy viN thadava – the form of vAmana, who was a bachelor, changed into the crowned form of thrivikrama and that radiant crown, full of gems, pervaded all the upper worlds.

mEl eduththa . . . Ezhulagum pOy – Just as thiruvAimozhi 7-4-1 said “mudi pAdham ezha” the divine foot which was lifted, competed with the divine crown and went higher and higher, up.

ponnAr kanai kazhal kAl – the divine foot which was golden, desired by everyone, and decorated with valorous anklet which seemed to roar “there is no one to equal me in protecting the followers”

Ezhulagum pOy kadandhu – the divine foot too went beyond the shell of the universe.