In the seventh pAsuram, AzhwAr says “As we approach thirumOgur which is the abode of emperumAn who is the cause of all and hence cannot avoid protecting us, all our sorrows will be immediately eliminated”.

(being the singular cause of many effects)
vAn – having ultimate greatness (to have all the effects in a fraction of himself)
peru – having the ability to create all effects
pAzh mudhalA – starting with prakruthi (primordial matter)
suRRum – pervading everywhere
nIr – causal water
padaiththu – creating
adhan vazhi – through that
thol – being ancient (since he is existing prior to the creation of the worlds inside the oval shaped universe)
muni mudhalA – brahmA who contemplates the creation process and others
muRRum dhEvarOdu – with all dhEvathAs
muRum ulagu – the whole material realm
seyvAn – one who creates, his
thirumOgUr – thirumOgUr
suRRi valam nAm seyya – as we (joyfully) perform favourable acts such as circumambulation etc
nam – our
thuyar – suffering due to the loneliness
kadidu – immediately
kedum – will go;

(hence)
maRRu araN ilam – we don’t have any other protection.

emperumAn is having uniqueness, ultimate greatness and the ability to create all effects in the whole material realm, creates everything starting with primordial matter, the all-pervading causal water, and creates the ancient brahmA who contemplates the creation process, and others including dhEvathAs; as we perform favourable acts such as circumambulation etc in his thirumOgUr, our suffering due to the loneliness will immediately go. Hence, we don’t have any other protection. 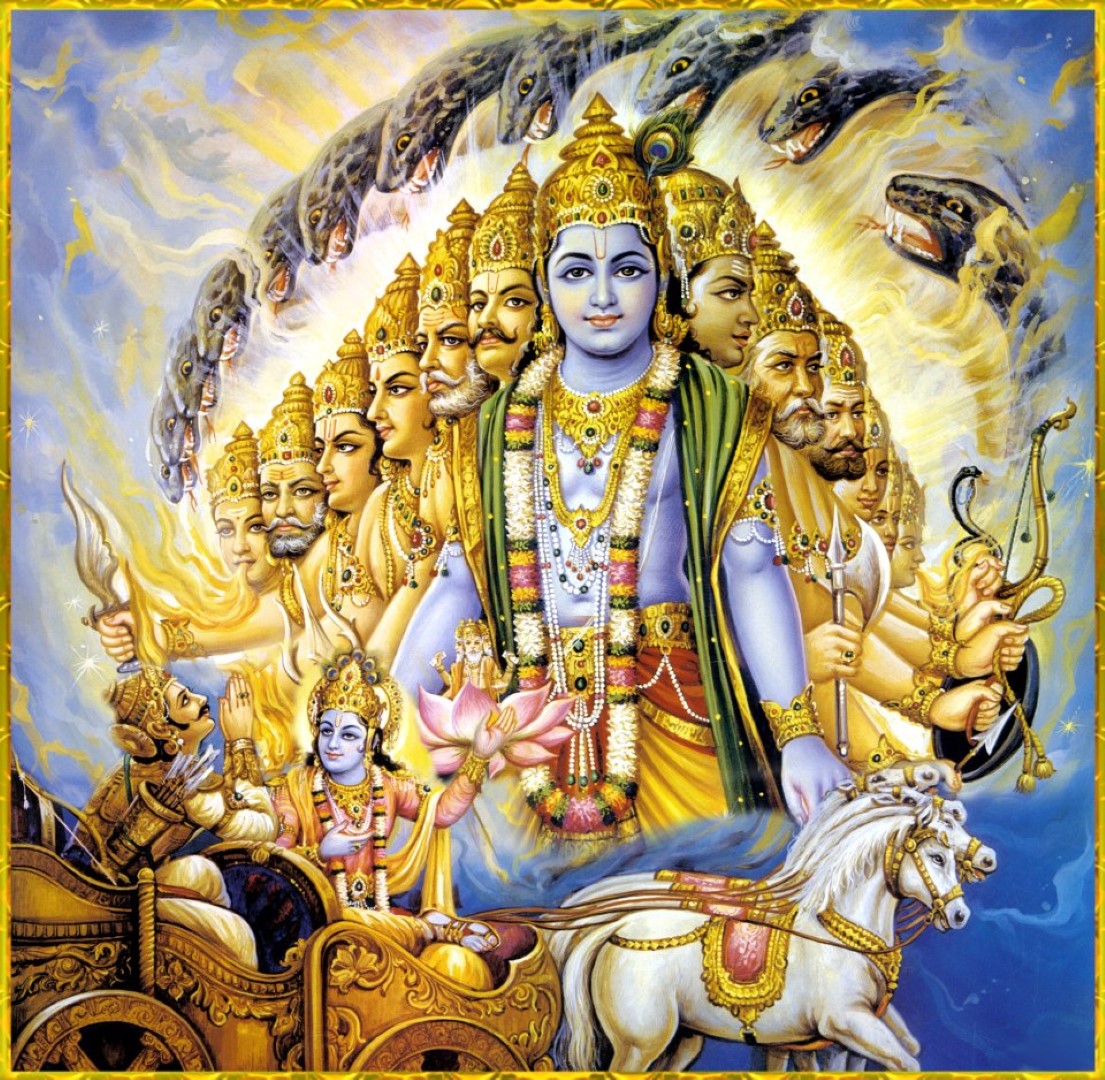 For his great devotees who live their life claiming bhagavAn to be everything for them (as in ‘vAsudhEva: sarvam’ वासुदॆवः सर्वम् – SrI bhagavath gIthA – 7-19), he becomes the greatest wealth himself. Thus, he is himself called ‘vasu:’ – the greatest wealth.

Etymology: Since he is himself the greatest wealth in all forms (for his great devotees like vidhura, mAlAkAra, AzhwArs, et al), he is called ‘vasu:’.

The manthra varNas in vEdhas hail thus while saluting bhagavAn: “I salute repeatedly that bhagavAn whose form is universal”

In bhagavath gIthA, arjuna claims thus: “I behold your glorious universal form which is infinitely expansive in all directions, with numerous heads, hands, abdomens, tongues, and eyes, which has neither a beginning nor an end”

bhagavAn’s every form is magnanimous – to the extent that it completely pervades all the space in all directions. Thus, he is called ‘bruhadhrUpa:’ – the one who has magnanimous forms.

“Your glorious form has completely pervaded all of the available space in all directions on this earth and in the skies, as well as everywhere in between”.

Etymology: The one whose form(s) is (are) so massive as to pervade all space is called ‘bruhadhrUpa:’.

The word ‘Sipi’ (शिपि) connotes ‘ray of light’. The word ‘vishta:’ (pravishta:) means that he pervades such rays.

As yAska puts it, “the word ‘Sipaya:’ represents rays; since such rays are entered by bhagavAn, he is called ‘Sipivishta:’”.

The scriptures declare that the body hair of bhagavAn is full of effulgent rays like the shining sun.

The bhagavath gIthA says thus: “Oh bhagavAn, you pervade all creatures through these most effulgent rays, which seem to be so fierce that they are ready to burn up everything”

Etymology: The word ‘Sipaya:’ refers to the rays. Since bhagavAn manifests by pervading all of such rays, he is called ‘Sipivishta:’. He is thus in the form of the sun, moon, fire, etc (other effulgent entities).

Since bhagavAn manifests in such glorious forms before his devotees who wish to see him thus – such as arjuna, bhIshma, udhanka, et al, he is called ‘prakASana:’ – the manifest one.

Etymology: The one who shows himself in his most glorious form (universal form) to his devotees like arjuna who seek to behold such grandeur is called ‘prakASana:’.

The word ‘Oja:’ (ऒजस्) refers to power. Similarly, the word ‘thEja:’ (तॆजस्) refers to the capacity to overpower others. It also refers to glory. The word ‘dhyuthi:’ (द्युतिः) refers to effulgence. Since bhagavAn possesses all of these – power, overpowering capacity, fame and effulgence, he is called ‘OjasthEjOdhyuthidhara:’.

This is a single name, and should not be split.

Etymology: Extraordinary power is called as ‘Oja:’. The capacity to overpower others is termed as ‘thEja:’. It also means glory. ‘dhyutih:’ means effulgence. The one who always sports all of these attributes is hailed with a single divine name as ‘OjasthEjOdhyuthidhara:’.

Since bhagavAn’s charm is well accepted even by the ignorant souls, he is called ‘prakASAthmA’ – the one whose characters are well manifest even among the dullards.

This is proven from the fact that even dhritharAshtra (who is in the opposing party to krishNa) pleads to bhagavAn thus: “Oh lotus eyed one – pundarIkAksha, you are indeed the lord of all worlds. Therefore, oh greatest of Yadhava clan, you must do me a favor”.

Further, since bhagavAn remains fierce to all of his opponents, he is called ‘prathApana:’. This is as hailed in the scriptures thus: “…with your ferocity, all your opponents get burnt”.

bhagavAn is called ‘rudhdha:’, since he is ever growing like the ocean tides on a full moon day.

The udhyOga parva in mahAbhAratha says thus: “Then the lion among men – bhagavAn – spoke further about his glorious form that is divine, extraordinary and vivid, and which is ever prosperous”

Etymology: Since bhagavAn prospers like the increasing ocean tides on a full moon day, he is called ‘rudhdha:’.

Since all the vEdhas glorify bhagavAn’s prosperity thus, he is called ‘spashtAkshara:’ – the one whose glories are clearly spoken.

Etymology: Since bhagavAn’s glories are clearly hailed in the streams of vEdhas, he is called ‘spashtAkshara:’. 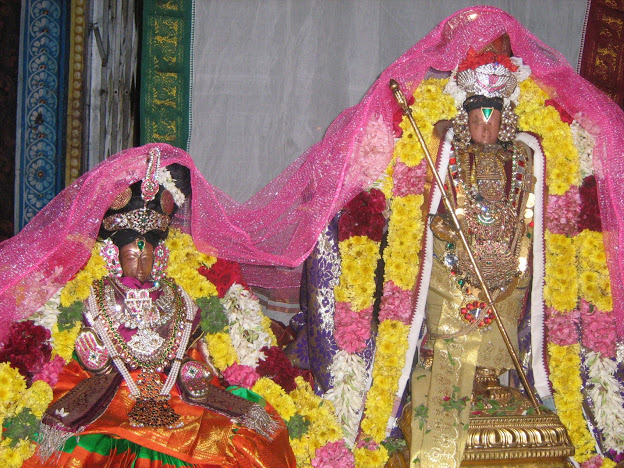 malar mangai mannum mandhan – being the supreme being who is firmly attained by periya pirAtti (SrI mahAlakshmi) who resides on a flower
kaNapuraththup ponmalai pOl ninRavan than – emperumAn who stands as a golden mountain in thirukkaNNapuram, his
pon agalam thOyAvEl – we have not attained his beautiful, divine chest
vALA ivai thAn en – what is the use of these wasted things?
ivai – these bosoms
enakkE poRaiyAgi – they have become an unwanted burden even for me

kaNapuraththup ponmalai pOl ninRavan – one who stood at thirukkaNNapuram forever, with a distinguished form such as mEru mountain (a celestial mountain).

kaNapuraththu – it is not a mountain which is very difficult to reach such as mEru. He is a mountain who is seen by everyone.

pon agalam – When water is very sweet to taste, one who drinks it will repeatedly cry out “Water”. In the same way, his divine chest is so distinguished that pirAtti who resides on it permanently, will keep thinking about it.

thOyAvEl – I have not attained! The long syllable at the end (El) denotes the pain suffered by parakAla nAyaki in not embracing with that divine chest.

thOyAvEl – Since emperumAn is referred to as “maragadha maNiththadam” (pond made of emerald gem), “vAsaththadam” (pond where  pirAtti dwells) and “SIthamiva hradham” (cool pond), she laments that she has not wet herself in the cool pond of his chest to get rid of the pangs of separation. Just as thirunedundhANdagam 13 says “melliyal thOl thOyndhAy” (embracing the slender pirAtti’s shoulders), whenever emperumAn feels the pangs of separation, it is on the cool pond of her shoulders that he embraces. azhagiya maNavALap perumAL nAyanAr, one of the commentators for this prabandham says “ Since he has beautiful chest, she thinks that she can embrace him when she melts down due to the pangs of separation. Isn’t she too a hiraNyavarNai (golden hued)?” hiraNyavarNAm is from SrIsUktham. Based on the SlOkam from SrI vishNu purANam “sthrInAmnI lakshmi” (all women are attributes of lakshmi), this interpretation assumes prakAla nAyaki to be pirAtti herself.

ennivaidhAn vALA – just as SrI rAma told lakshmaNa in SrI rAmAyaNam kishkindhA kANdam 1-44 “paSya lakshmaNa pushpANi nishpalAni bhavanthi mE” (lakshmaNa! Look at the flowers which are of no use to me), since the flowers which sIthAppiratti did not enjoy  are of no use to him, parakAla nAyaki too says that there is no use of her qualitites, her femininity and her bosoms which are not enjoyed by him.

enakkE poRaiyAgi – I carry these bosoms because they are to be enjoyed by him. When he is not enjoying them, could I carry them on my own? They are an unnecessary burden even for me. Did not ANdAL too say in nAchchiyAr thirumozhi 13-8 “koLLum payan onRillAdha kongai thannaik kizhangOdum aLLippaRiththittu avan mArvil eRindhu en azhalai thIrvanE” (I will uproot these useless bosoms , throw them on that krishNa’s chest and get rid of my suffering)?