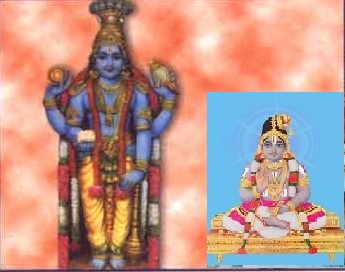 In the tenth decad – AzhwAr became blissful, about the great favour of emperumAn who used AzhwAr as a tool to sing thiruvAimozhi, as if his enemy had become equivalent to being insentient; as he could not carry out any favour in return, he determined “there is nothing that can be done, other than acts of servitude which bring glories to the master” and highlights the following aspects of emperumAn:

AzhwAr meditated upon these aspects, thinking that such emperumAn is present in the nearby thiruvARanviLai to eliminate our hurdles and accept our service, yearns for service at his divine feet, completes the decad by determining how emperumAn (the refuge) removes the hurdles by explaining the great strength of those hurdles first.

In the previous decad, AzhwAr became perplexed not finding a favour in return for the great favour of sarvESvaran who made him sing thiruvAimozhi; due to his bewilderment he became perplexed as there is nothing he could offer in reality; emperumAn is not desiring for anything and does not have any shortcoming which should be fulfilled; it is Azhwar’s gratitude which did not let him remain calm, which made him do that; yet, he will not remain satisfied. Now, there is one aspect, where we can offer emperumAn something and he will accept that from us. When we perform our natural kainkaryam (service) to him, he is of the nature to consider that as the favour in return; this being the case, AzhwAr thought “let us engage in eternal kainkaryam to him which is fitting our nature”. Now, vEdha vAkyams (sacred texts) will explain [the goal as] reaching brahmam as in chAndhOgya upanishath 8.12 “svEnarUpENa abinishpadhyathE” (he attains his natural and distinguished state) which is attaining the natural state of the AthmA, as kainkaryam which is beyond that, will be a natural culmination at that stage similar to avagAthasvEtham (when one works hard, sweating will be a natural outcome). Due to the attachment to the result of the realisation of true nature, which is kainkaryam, AzhwArs will always speak about kainkaryam as in thiruvAimozhi 3.3.1 “vazhuvilA adimai seyya vENdunAm” (We should perform all types of services without leaving anything at all times without break/rest). Those [rishis/sages] who realised “samsAram [material realm] is to be given up; sarvESvaran is desirable” and surrendered to bhagavAn, stopped with explaining about reaching bhagavAn as in SrIvishNu purANam 6.5.59 “bEshajam bhagavath prApthi:” (reaching bhagavAn is the cure for the disease of samsAram); but the greatness of AzhwArs who were blessed with unblemished knowledge and devotion by bhagavAn’s mercy as said in thiruvAimozhi 1.1.1 “mayarvaRa madhinalam aruLinan“, is their focus on kainkaryam.

Now, his gratitude torments him not to remain satisfied thinking “we will serve him in paramapadham after the relationship with this [material] body is eliminated”. Hence, he yearns “just as SrI rAma along with his brothers sat in the great assembly in SrI ayOdhyA to hear SrI vAlmeeki bhagavAn’s SrIrAmAyaNam, emperumAn is seated along with his divine consorts on AdhiSEsha as explained in paryankavidhyA and divine associates, in thiruvARanviLai, to hear thiruvAimozhi. Let me go there and serve him, by making him hear thiruvAimozhi”; when sarvESvaran is the goal, just as archirAdhi gathi (the path which leads to him), the divine abode of paramapadham are part of the goal, the yearning too is part of the goal. That is, the ancillary results which were inapt previously [for one who desires for eternal kainkaryam, these ancillary aspects are of no interest generally], but when resulting as part of the pursuit of the means, they will all be part of the goal; similarly, AzhwAr now thinks “let us go and serve the divine feet of sarvESvaran who is residing in thiruvARanviLai; even that is not needed, just reaching that abode is sufficient; even that is not needed, this yearning to reach there from here is sufficient. Now, as we considered that abode as the goal, emperumAn too will consider our residence as his goal and arrive here; until then, we will worship him and then we will also enter that abode; that abode itself is our goal; as we enter that abode, our hurdles for our kainkaryam, will be removed. Now, even if I desired for anything else, my heart will not think about anything other than that abode as said in SrI rAmAyaNam uththara kANdam 40.16 ‘bhAvO nAnyathra gachchathi’ (hanuman says – my mind will not focus on anyone else)” Thus, AzhwAr yearns about the ways he can enter thiruvARanviLai and serve there, and becomes blissful. The difference between SrI rAmAyaNam and this (thiruvAimozhi) is, here, the one who composed it himself [AzhwAr] recited it and the one who is the object of the composition himself [emperumAn] hears it. While SrI rAmAyaNam is glorified as “sIthAyAS charitham mahath” (the great history of sIthA), SrI rAma heard it alone without the presence of sIthA who is the object of SrI rAmAyaNam, and while it was composed by SrI vAlmeeki bhagavAn, it was recited by kuSa and lava.