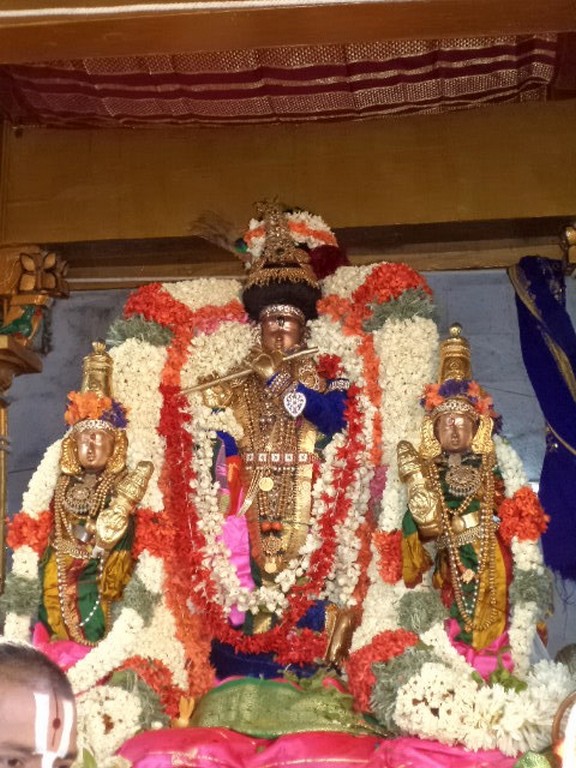 After emperumAn has taken residence at various divine abodes, one can go to such divine abodes and get salvation. People need not torture their physical forms in order to attain what they desire. AzhwAr tells the people of the world that emperumAn has taken residence in these places without bothering about his well being and is carrying out tasks for us and hence you do not have to carry out penance by harming your physical forms.

nIr – you all (Oh people of the world!)
poruppu idaiyE – amidst the mountains
ninRum – standing
punal – in the waterways
kuLiththum – immersing in them
aindhu neruppidaiyE – amidst panchAgni (five fires)
niRkavum – doing penance, standing
vENdA – there is no need
viruppu udaiya – being desired (by all)
vehkA – at thiruvehkA (a divine abode in present day kAnchIpuram)
sErndhAnai – emperumAn who has come there and is reclining
mey – without expecting any benefit
malar thUy kai thozhudhAl – if one offers flowers and worships
thI vinaigaL – bad deeds  (sins, results of such bad deeds)
Ayndhu – analysing (that there is no place for us here) and knowing
ahkAvE – won’t they shrink? (implies that they will run away)

aindhu neruppidaiyE niRkavum nIr vENdA – lighting fires on all four sides and standing amidst them, with the sun in the sky burning down, during hot summer months (thus standing amidst five fires); there is no need to carry out any penance like this and suffer. AzhwAr is asking whether we have to get rid of our sins by suffering like this. Instead, he tells us to follow the simple method given below and get rid of our sorrows.

mey malar thUy kai thozhudhAl – instead of mixing up with the falsity of desiring other benefits, if we truly consider the benefit of desiring only emperumAn, offer flowers  and worship him, and attain him

meymmalar thUvi Ayndhu – we can construe the meaning for this as – if we analyse his auspicious qualities, meditate on those and worship him with our hands, sins will not come anywhere near us. If the text is taken as men malar thUvi, the meaning will become – worshipping him with soft flowers.

We will take up the 77th pAsuram next.