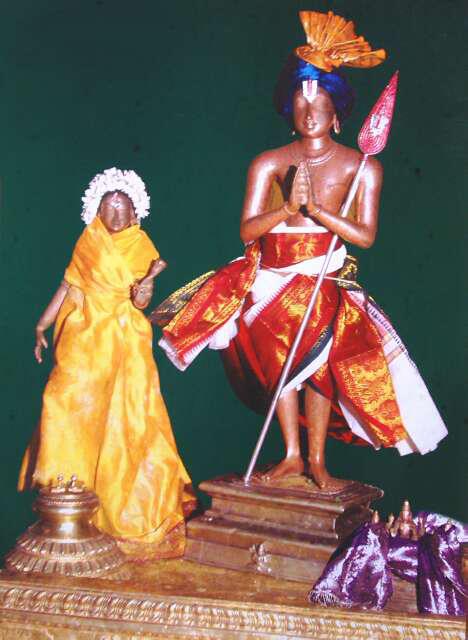 There are two interpretations for the preface to thaniyan.

This would be when the first phrase is treated as “muLLi chezhu malarOr thArAn”. There are five entities which are collectively known as “SabdhAdhi vishayangaL”. These are Sabdha, sparSa, rUpa, rasa and gandham. Sabdham is sound; sparSa is touch; rUpa is form, rasa is taste and gandham is smell. These five are primarily responsible for controlling one’s heart. piLLAi thirunaRaiyUr araiyar celebrates thirumangai AzhwAr who gave us this work called “siRiya thirumadal”. With the help of “siRiya thirumadal”, piLLAi thirunarayiUr araiyar says that devotees who are at the service of the lotus feet of thirumangai AzhwAr, are able to control the unwanted desires which emanate because of “SabdhAdhi vishayangaL” and consequently they are able to focus their mind and heart towards SrIman nArAyaNan. In this interpretation, the purport is that the prabandham (set of verses) called “siRiya thirumadal” acts as sustenance for devotees who would otherwise destroy themselves due to pain of separation from SrIman nArAyaNan.

This would be when the first phrase is treated as “muLLi chezhu malarO thArAn”. There are devotees of thirumangai AzhwAr who cannot live by separating themselves from their beloved AzhwAr. thirumangai AzhwAr gave this work called “siRiya thirumadal” so that these devotees are able to sustain themselves and not indulge in materialistic pleasures which are controlled by “SabdhAdhi vishayangaL”. thirumangai AzvhAr used to wear a garland that was made of “muLLi” flowers. However, he did not give his devotees “muLLi” garland. Rather he gave them something that is even more spectacular which is nothing but the garland of verses called “siRiya thirumadal”.

sIrkkaliyan – thirumangai AzhwAr who is also known as “kali kanRi” is full of auspicious qualities
thArAn – someone who is decorated with garland
chezhum – fertile
Or- unparalleled
muLLi malar – muLLi flowers
thiruvALan – having enormous wealth called “service to SrIman nArAyaNan”.
vaLLal – magnanimous
maruvALan – having a sword, fitting (in his hand)
vetti – obliterated
kArkkaliyai – the black and evil effects of kali (4th of the four yugas or ages).
madal thandhAn – gave the dhivya prabandham called “siRiya thirumadal”.
enuLLam – my heart
kodhiyAmE – without any suffering
muLai madhiyam koLLikku – for the beautiful fire which is the rising moon.

muLLich chezhu malarO(r) thArAn – thirumangai AzhwAr, the king of “thirumangai” , is one who is seen adorned with unparalleled muLLi flowers which seem to have blossomed exclusively for him. Just as nammAzhwAr is celebrated as “vaguLaththArAnai” (thiruviruththam thaniyan) (one who wears the garland made of vaguLa (or magizhampU) flowers), thirumangai AzhwAr is referred to as “Or thArAn”. The reason for using the word “unparalleled”  as an adjective for the “muLLi” flowers is because even in separation, the thuLasi garland (which adorns emperumAn and) which torments the devotee in separation is no match for AzhwAr’s garland. The above description fits in line with the first interpretation of preface to thaniyan. Now, we will explore the meanings of the second interpretation of preface to thaniyan in which the phrase is “muLLich chezumalarO thArAn”. We are devotees of thirumangai AzhwAr. He does not give us the great muLLi flowers which he wears. Since thirumangai AzhwAr considers himself to be a servitor for us (because we are SrIvaishNavas), he gives us an even more spectacular gift – the garland of his verses known as “siRiya thirumadal”.

Why is he giving the madal?

muLaimadhiyam koLLikkenuLLam kodhiyAmE – The moon which has just risen will appear to scorch those people who are in love but are separated. So the moon that is usually connected with coolness, is now referred to as an object that scorches, similar to “koLLik kattai” (burning wood). Did not this AzhwAr too say in periya thirumozhi 2.7.3 “pOndha veN thiNgaL kadhir suda meliyum”? (the moon is similar to sun in that it scorches him throughout the night when he is separated from SrIman nArAyaNan).  Just as it is mentioned in the saying “chandhras chaNda kArayathE” moon becomes sun with singing (burning) action for other people in samsAram (who are separated).

Did not SrIrAmApirAn say in SrI rAmAyaNam kishkindhA kANdam 1-70 “yAni sma ramaNIyAni thayA saha bhAvanthi mE I thAnyEvAramaNIyAni jAyanthE mE thayA vinA II”? (all those places or objects which were pleasant to me when she (sIthAp pirAtti) was with me have become unpleasant when she is not with me)

The verse  “muLai madhiyam koLLi” could be considered either as muLai madhiyam koLLi or as muLai madhi am koLLi. muLai madhiyam koLLi would mean rising moon which is like a burning wood. muLai madhi am koLLi would mean rising moon which is like a  beautiful burning wood. am – beautiful. madhiyam – moon. Mentioning moon here is representative of the five entities which torment those who are in separation – moon, jasmine flowers, poetry in kurunji rAgam, wind that blows from the northern direction and a bed made of flowers. Did not nammAzhwAr say in thiruvAimozhi 9.9.1 “malligai kamazh thendRal IrumAlO vaN kuRunji isai thavarumAlO” (the southerly wind, with the fragrance of jasmine flower, appears to be cutting like a sword and the sweet kurinji musical tone appears to be drilling the skin) and in thiruvAimozhi 9.9.4  “vAdai thaN vAdai vevvAdai AlO mEvu thaN madhiyam vem madhiyamAlO men malarppaLLi vempaLLyAlO” (the northerly wind which is supposed to be cool appears to be spitting fire; moon, which is cool and is looked at desirously, appears to be with hot rays; the soft bed of flowers appears to be a bed of embers), thus bringing out all five entities mentioned above which torment those who are separated? Earlier, we saw that there are collectively five entities, known as “SabdhAdhi vishayangaL” which torture one’s heart. Similarly there is this set of five entities which torment people who are separated from their beloved.

The phrase muLai madhiyam koLLikku ennuLLam kodhiyAme is key to the two interpretations which were discussed in the preface to the thaniyan. This verse has to be set properly as mentioned below to get the meanings which had been explained earlier.

The phrase muLai madhiyam koLLi ennuLLam kodhiyAme should be joined with thandhAn madal and so should be read as muLAi madhiyam koLLikku ennuLLam kodhiyAmE thandhAn madal. thirumangai AzhwAr gave “siRiya thirumadal” to us, who are thirumangai AzhwAr’s devotees. He did not give the muLLi flowers which he decorated himself with. Instead he gave the garland of verses known as “siRiya thirumadal” with which we can continue to exist.

muLaimadhiyam koLLikkennuLLam kodhiyAmE thandhAn madal – What a great benefit did AzhwAr carry out for me so that my mind will not be singed by the rising moon which appeared like a burning wood for me!

Who gave such a benefit?

vaLLal thiruvALan – vaLLal – great, magnanimous person. Even when emperumAn did not help him, AzhwAr helped him. Hence he is magnanimous. thiruvALan – one who has the wealth of kainkaryam (service) to emperumAn.

sIrkkaliyan – If kalikanRi (thirumangai AzhwAr) who has qualities such as compassion etc, has to give the madal (leaf of palm tree), the surrounding thorns have to be snipped. The pAsuram says that he snipped the thorn of dark kali (kali is the last of four yugas, signifying ignorance). Darkness here refers to ignorance. Thus the opinion is that AzhwAr cut out kali which gives ignorance, since he is called as kalikanRi (one who cut out kali). To cut the thorns, one needs a sword. Does AzhwAr have this too?

maruvALan – one who has a drawn sword. One who has a sword, fitting well in his hand. When explained as a single word, the term vAL would refer to knowledge. The implied meaning is that AzhwAr cut the darkness of ignorance with the sword of true knowledge.

maruvALan – maru also refers to fragrance. AzhwAr enabled us to smell the fragrance of bhagavadh anubhavam (enjoying matters related to emperumAn). As a support for this, reference is made to thiruvAimozhi 8.9.10 “ivaL andhaNdhuzhAy kamazhdhal” (the reason for this nAyaki (leading lady) to acquire the fragrance of thiruththuzhAy (thuLasi) ….).

maruvALan – maru also refers to attaining. Thus, this would refer to AzhwAr attaining parama purushan (supreme being) as a natural quality in him. Alternatively, it could be said that he attained chEthanas (sentient entities). He fell head over heels, of his own volition, on chEthanas and ruled over them. Thus he gave the chEthanas madal in order to make them like himself. In the second interpretation discussed above, it could be assumed  that AzhwAr gave madal instead of mAlai (garland).  The significance of this is that while AzhwAr’s followers desire the garland which he had worn and removed, since AzhwAr considers himself to be a servitor to his followers, as mentioned in periya thirumozhi 3.7.7 “annaiyum aththanum enRu adiyOmukku irangiRRilan” (she is  not having pity on us who are her parents) he gave them the madal prabandham itself instead of the garland which he had worn.

We will go through the pravESam (introduction) for this prabandham in the next article.