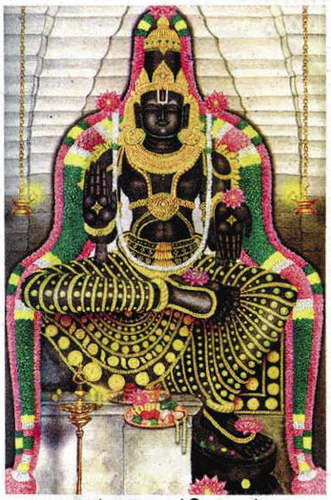 AzhwAr says “Haven’t you seen how my heart worships emperumAn! You also worship like that”. He implores us to attain emperumAn who protects the world and who has unlimited sweetness. Just as the elders carry out worship first and then ask the children to worship, and just as the elders carry out activities such as sandhyAvandhanam and tell others to do likewise, AzhwAr demonstrates worshipping emperumAn.

(You also, like this)
uRRu vaNangith thozhumin – hold on to him, worship him and attain him (without leaving him)

uRRu – approaching; instead of saying that we do are not qualified and leaving him, approach him.

ulagEzhum muRRum vizhungum mugilvaNNan – ensuring that worlds such as earth do not go separately, keeping them in his divine stomach and protecting everyone because of the danger [of deluge]

mugil vaNNan – just as clouds let out rain without any distinction, irrespective of whether the place where it rains is land or sea [i.e. raining everywhere], emperumAn also protects everyone without making any distinction. Just as a mother feels happy while nurturing her infant, emperumAn’s divine form will feel happy because of protecting us. emperumAn, whose form removes our fatigue and who has the quality of magnanimity. That he protects us will be known from his divine form itself.

pUm pAdakaththuL irundhAnai – since then, emperumAn has taken dwelling at the sweet divine place thiruppAdagam (in kAnchipuram) in order to remove the enemies of his followers.

pUm pAdakaththuL irundhAnai – it  is the dhivyadhESam (divine abode) where emperumAn removes the deluge for his followers, which is samsAram, and creates deluge for their enemies, which is fear. Even though one iraNiyan had been annihilated, since this world has many more iraNiyans, he has taken residence here to destroy them too.

Eththum en nenju – my heart worships him. prahlAdha (son of iraNiyan) worshipped narasimha, who incarnated briefly and disappeared. But this AzhwAr is worshipping the emperumAn who has taken archAvathAra (deity) form forever at thiruppAdagam. This itself is the difference between the two.

pUmpadagaththuL irundhAnai – he has taken residence at thiruppAdagam so that everyone can see how he had helped a child.

We shall move on to the 95th pAsuram next.