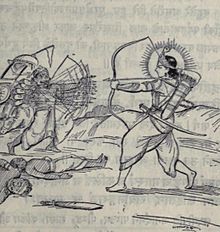 In the eighth pAsuram, AzhwAr says “For me who is having the heart which constantly thinks about krishNa’s activities starting with his victory over bANa, is there any bewilderment?”.

Subsequently, AzhwAr says “emperumAn fulfilled his desire even by accepting alms ; For me who is having the heart which constantly thinks about  the activities of such krishNa starting with his victory over bANa, is there any bewilderment?”.

nIL – expansive
nilaththodu – earth
vAn – sky
viyappa – to the amazement
niRai – with many strong associates (while bANa himself was the real enemy, even those who came to support him such as rudhra, subrahmaNya et al)
perum pOrgaL – great battles
seydhu – performing
vANan – bANa’s
Ayiram thOL – the thousand shoulders (which were craving for battle)
thuNiththadhum – the way he severed
utpada – including
maRRum – other
pala – many
mANiyAy – as a brahmachAri (celibate boy, as a person seeking alms)
nilam – earth
koNda – accepted
mAyan – mischievous
en – manifesting such mischief to me
appan than – the benefactor, krishNa’s
mAyangaL – amazing activities
kANum – to see in front of me and enjoy the same
nenju – heart
udaiyEn – having;
ini – now
enakku – for me
enna kalakkam – what bewilderment
uNdu – present?

To the amazement of the expansive earth and sky, performing great battles with bANa and his many strong associates, krishNa severed the thousand shoulders of bANa; as a brahachAri, he accepted the earth through a mischievous way and manifested that mischief to me; I am having the heart to see in front of me and enjoy these and many other amazing activities of krishNa, the benefactor; now, for me what bewilderment is present? Only for those who don’t have an obedient mind, there would be bewilderment such as svarakshaNE svAnvayam (protecting oneself through self efforts), anyarakshyathvam (being protected by others) etc.

AzhwAr mercifully states in this pAsuram that thinking about how emperumAn remains attainable by everyone, he became sure that he will carry out kainkaryam permanently at his divine feet.

piRai Eyndha kOdu – having crescent shaped tusks
sem kAn – having reddish eyes
kari – the elephant gajEndhrAzhwAn
viduththa – one who released it from the jaws of crocodile
pemmAn – the supreme being
iRaikku – to SrIman nArAyaNa
AL pada – to be his servitor
thuNindha yAn – I became firm
Adhi nadu andhivAy vaigalum – during all times in the morning, noon and night
vAyndha malar – flowers that I could get my hands on
thUvi – strew them haphazardly
Ayiram pEr – the thousand divine names
Ayndhu uraippan – I will meditate in my heart

Ayndhu uraippan – I will be constantly meditating on his divine names

Adi nadu andhi vAy – during beginning, middle and end periods of the day. There is no rule with regard to time for reciting the divine names of emperumAn. One can recite during morning, noon and night, at all times.

vAyndha malar – even among flowers, there is no rule about which flowers are to be offered to emperumAn. With any flower that one could get his hands on.

thUvi – there is no rule in the way the flowers are offered. Scattering them without following any procedure

vaigalum – we will attain him at all times. Just as we eat everyday, we will recite his names everyday.

Eyndha piRaikkOttuch chengaN kari viduththa pemmAn – elephant with crescent shaped tusks and reddish eyes. The elephant could be considered as either referring to kuvalayApIdam which was incited by kamsa to kill krishNa or to SrI gajEndhrAzhwAn which was protected by emperumAn from crocodile. If it refers to kuvalayApIdam, we can construe it as referring to emperumAn removing the hurdles for his followers. If it refers to SrI gajEndrAzhwAn, we can construe it as referring to emperumAn’s affection towards those who approach him.

pemmAn – to my swAmy (master); to my Lord who is the supreme entity. The knowledge that he is a servitor to emperumAn gives the confidence to AzhwAr to attain him.

We shall take up the 74th pAsuram next.