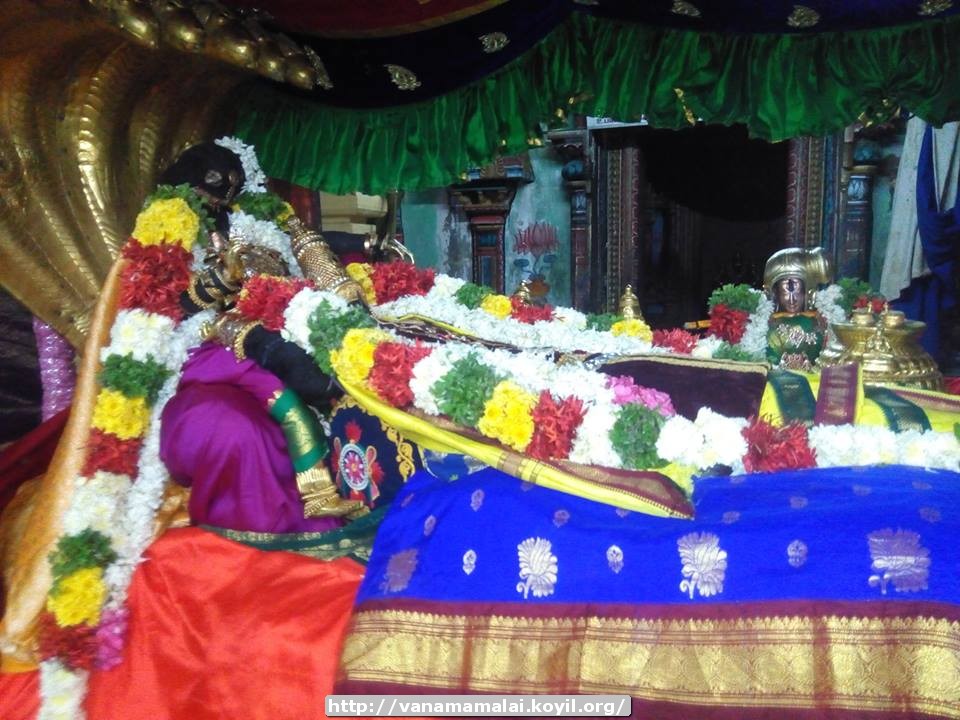 In the first pAsuram, AzhwAr who is devoid of upAyams (means) such as karma yOgam etc and who is desirous of a saviour, sees emperumAn who is complete and is seeking those who seek his protection, and sets out to have his desire fulfilled.

In the first pAsuram, AzhwAr says “I am devoid of upAyams mentioned in SAsthram to attain you, and cannot survive without you; am I outside the purview of you who are a favourer in being together with your devotees and who are ready to help others?”.

nORRa – performed to attain the result
nOnbu – karma yOgam
ilEn – I do not have;

(hence)
nuN – in subtle form
aRivu – gyAna yOgam which is focussed on knowledge about self and god
ilEn – I do not have;

(hence)
Agilum – though not having bhakthi yOgam which is possible by having these two, i.e., karma yOgam and gyAna yOgam
ini – after meditating upon your qualities
unnai – you (who are the saviour)
vittu – other than
onRum – even for a moment
ARRa – to survive
kiRkinRilEn – unable;
aravu – AdhiSEsha who is your servitor
aNai – as mattress and favouring him by placing your divine body on him
ammAnE – being the distinguished lord
sERu – muddy field
thAmarai – lotus flower
sennel Udu – mingled with paddy crop
malar – attractive to be blossoming
sirIvaramangala nagar – in SrIvaramangala nagar
vIRRu – being distinguished, manifesting your readiness to protect well your devotees
irundha – being seated
endhAy – Oh benefactor for me!
angu – in your presence there
unakku – you who are the saviour
migai – outside the savable souls
allEn – I am not.

I have not performed karma yOgam to attain the result; I have not performed gyAna yOgam which is in subtle form and is focussed on knowledge about self and god; though not having bhakthi yOgam which is possible by having these two, i.e., karma yOgam and gyAna yOgam, I am unable to survive even for a moment without you after meditating upon your qualities; Oh benefactor for me who is seated in a distinguished manner manifesting your readiness to protect well your devotees in SrIvaramangala nagar [vAnamAmalai/thOthAdhri, also known as nAngunEri] where attractive lotus flower is blossoming while being mingled with paddy crop in muddy fields! In your presence there, I am not an outsider to the savable souls who are to be saved by you who are the saviour.

When asked, like those who do not have any principal will not get any interest, if these don’t exist how would you get the result?

When emperumAn asked AzhwAr “But were you not patient all along?”, AzhwAr says,

When asked “what is the benefit for me?”, AzhwAr says,