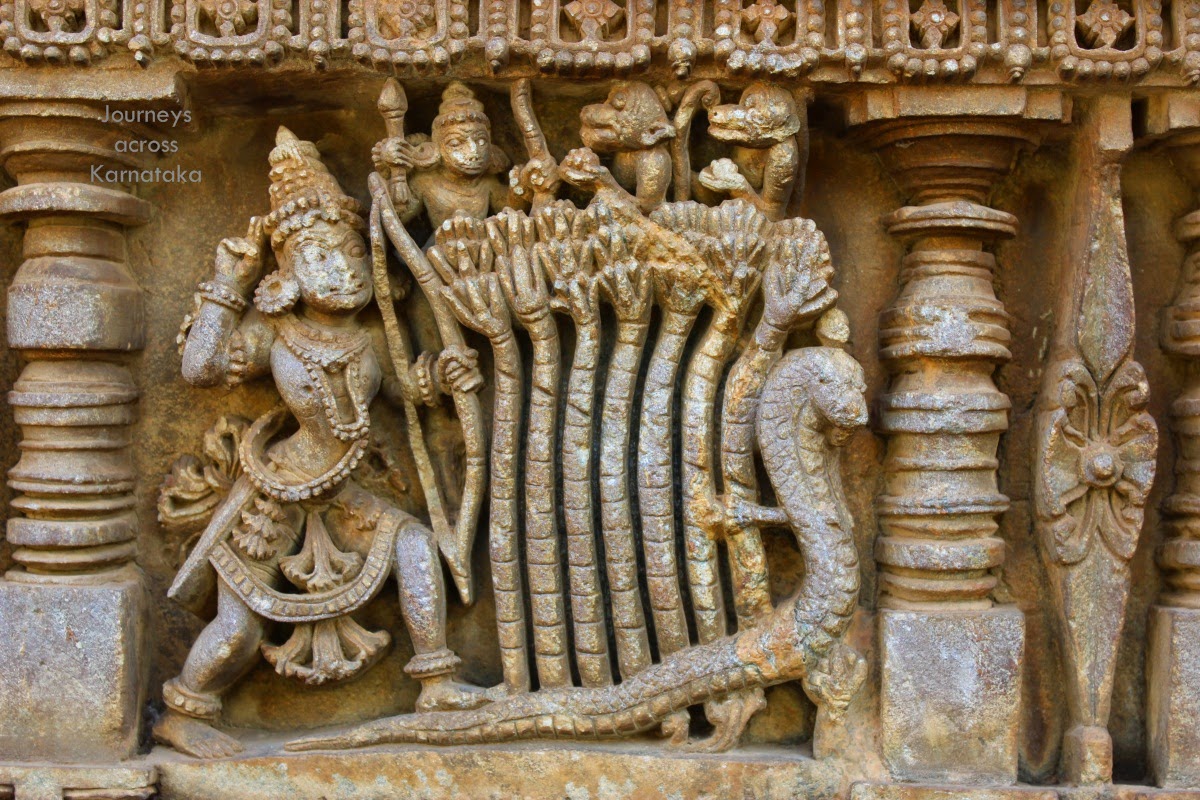 AzhwAr, after mercifully mentioning about the way emperumAn came to thirumalai, further says that by looking at the divine hands of thiruvEnkatamudaiyAn (the Lord who has thiruvEnkatam as his dwelling place) one can state with assurance that they have grown in order to topple the enemies. Let us look at the pAsuram and its meanings:

malaiyAl – with gOvardhana hill
kudai kaviththu – inverted like an umblrella
mA vAy piLandhu – tearing apart the mouth of demon kESi who came in the form of a horse
silaiyAl – with a bow
marAmaram Ezh seRRu – piercing seven peepal trees
kolai yAnai – the elephant which was placed to kill
pOr kOdu osiththanavum – breaking the tusks which engage in fighting
pUm kurundham sAyththanavum – pushing the kurundha tree
kAr kOdu – Sankam (conch pAnchajanya) which reverberates like the cloud
paRRiyAn kai – is the divine hand of one who holds it.

malaiyAl kudai kaviththu – it is natural for people to open an umbrella when it rains. But what did emperumAn do when indhra, the chieftain of dhEvas (celestial beings), started a hailstorm? He took out a hill and held it as an umbrella! emperumAn reasoned  “indhra is not a demon. Since I have eaten the food meant for him, he is angry and is showering the hailstorm. Let me not harm him. Let me hold this mountain as an umbrella and protect the cowherds and the cows” and hence held the gOvardhana hill as an umbrella.

mA vAy piLandhu – when the demon kESi came in the form of a horse and started indulging in extensive harm, emperumAn tore his mouth and killed him. Even sages such as nAradha et al screamed in fear on seeing the demon. But emperumAn tore him like one would tear a blade of elephant grass by thrusting kESi’s mouth with his hands.

silaiyAl marAmarm Ezh seRRu – with the help of a bow, emperumAn pierced holes in seven peepal trees in rAmAvathAram. It appears to AzhwAr that both rAmAvathAram and krishNAvathAram are alike since he is speaking about the activities of krishNa both before and after this incident but in between he mentions an activity in rAmAvathAram. Wasn’t this action done by emperumAn only in order to create belief in sugrIva (the monkey king), his devotee, on his strength!

kolai yAnaip pOrkkOdu osiththanavum – in rAmAvathAram, since emperumAn was born in the lineage of warriors, he used a bow which is the weapon for warriors. But in krishNAvathAram, he was a cowherd and depended on his physical strength (his hand) to kill the elephant kuvalayApIdam.  This elephant was killing those that it happened to encounter with its tusks, which are useful to it in times of war. krishNa caught hold of those tusks and broke them and pushed the elephant to its death.

pUngurundham sAiththanavum – the tree kurundham (a type of tree) was full of flowers from close to its roots to the top. It was such that children were very much attracted to it. emperumAn went to it as if he were going to pluck flowers from it and pushed it completely.

kArrkOdu paRRiyAn kai – AzhwAr says that all these activities [mentioned above] have been carried out by one whose hands hold kArkkOdu. kAr means cloud. emperumAn’s hand is holding the conch pAnchajanyam which looks like a cloud. Looking beautiful and making loud noise are common to both cloud and pAnchajanya. Alternative explanation – the conch pAnchajanya is holding on to emperumAn whose complexion is like the cloud. In this case, emperumAn’s divine form looks like cloud in terms of its colour and beauty. Thus the meaning here will be that emperumAn is holding the conch with his hand which looks like cloud. His hands are so tender that they will become red by merely holding the conch. With such soft hands, AzhwAr says, he has carried out the difficult tasks as mentioned above. In this pAsuram, in the terms osiththanavum and sAyththanavum reference is to plural number [of hands] while in the end the reference is to the singular form kai [hand]. There is nothing contrary in these terms as what is meant is that emperumAn effortlessly carried out difficult to achieve tasks which require many hands, with his single, soft hand.

We shall enjoy the 28th pAsuram next.