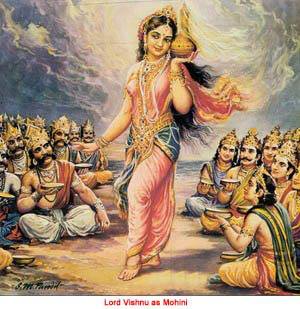 In fifth pAsuram – AzhwAr says “Those who meditate upon, become emotional and glorify emperumAn who is having the nature of fulfilling the desires of prayOjanAntharaparar (those who worship him with ulterior motives), are the masters who protect us in this world and higher world”.

emperumAn is the distinguished emperor for the nithyasUris who have greatness of having parama sAmyApaththi (having similar qualities that are of bhagavAn‘s) and fed the nectar fully to the dhEvas (celestial beings) who desired for immortality previously (when they were cursed by dhurvAsa muni) and ensured their existence; SrIvaishNavas can speak (in a disorderly manner due to overflowing love) about his greatness of favouring others; those who speak about such SrIvaishNavas (in turn being overwhelmed with love) are the ones who provide us favours in this (material) world and the other (spiritual) world.

How long will you desire for them?