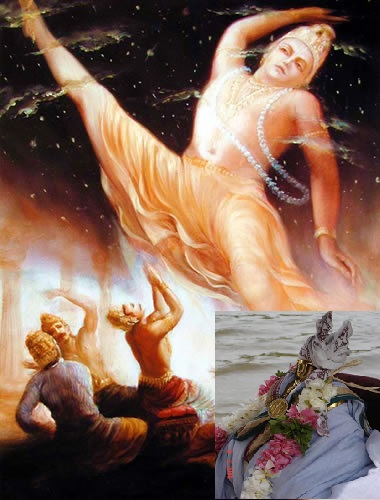 AzhwAr, being greatly satisfied on uniting with emperumAn, speaks about that experience.

In the tenth decad – AzhwAr, realising that emperumAn is the cause for budhdhi (intellect) etc and seeing that emperumAn himself blessed him with adhvEsham (non-enmity), gaNanA (meditation, analysis etc), nirathisaya bhakthi (unsurpassed devotion), thinks “emperumAn will mix with those who have no enmity towards him, like he mixed with me”. He further thinks “He would bless such attitude to those who he wants” and feels satisfied.

In the tenth decad – AzhwAr, meditating upon “The cause for blessing such complete union is his unconditional magnanimity” enjoys the following aspects and feels delighted:

Previous AchAryas explained this decad as AzhwAr‘s expression of satisfaction after enjoying complete union with emperumAn. Here nirvruti is explained as joy.

bhattar gives a special explanation based on AzhwAr’s complete union with emperumAn [He goes on to explain the unconditional grace of emperumAn that blessed him such experience].

Previously AzhwAr stopped at “uchchiyuLLE niRkum” indicating that there is nothing remaining to be accomplished. Only thing that is to be done is to continue this without any break. AzhwAr thought about the great nature of the result (of bhagavAn being on top of his head) and inquired how he arrived at this result. He realised that he did not have any good qualities matching the greatness of the result. The only aspects that AzhwAr observed in himself were adhvEsham (non-enmity) and Abhimukyam (friendliness) towards emperumAn. But those cannot be explained as the means for the goal. Even if one has parama-bhakthi (most advanced devotion), that cannot be equated with the great result (of eternal kainkaryam towards emperumAn). When one submits a lemon (towards the king as a friendly gesture) and is gifted a kingdom by the emperor, the lemon is not the real price for the kingdom. For the benefit that is received by the grace of emperumAn, nothing from the individual’s side can be established as the means. This is explained in periya thiruvanthAdhi 56 “varvARonRu illaiyAl vAzhvinithAl” (there is no [separate] means to achieve him, yet, the result is greatly enjoyable].

When emperumAn creates the individual [i.e, giving body], he gives the tools to him to avoid bad path and pursue good path; whatever good things happen to him, emperumAn is the cause for those too. Since bhagavAn is the controller of everyone’s intellect etc, emperumAn himself is the one who nurtures everything starting from adhvEsham (non-enmity), parigaNanA (contemplation) up to parama bhakthi (unflinching devotion). AzhwAr becomes greatly satisfied thinking “emperumAn blessed me who toiled in samsAram from time immemorial the same result that is enjoyed by nithyasUris. How great of him!” and on thinking about emperumAn giving joy up to his head [in the previous decad] while uniting with him.