(amudhanAr) says he would befriend only those who do not befriend anyone other than emperumAnAr who in his heart has kept the divine feet of thirumazhisaip pirAn.

Introduction (given by piLLai lOkam jIyar)

The previous four pAsurams are a section where it is about getting to the devotees of emperumAnAr who is a devotee of the AzhvArs; he who lived along the same time as the first three AzhvArs (mudhalAzhvArs), and who based on advice and reformation by pEyAzhvAr had understood about thathva (truth), hitha (means), purshArththa (goal), yAthAthmya gyAnam (knowledge of inner meanings of self, emperumAn, etc)., is thirumazhisai AzhvAr; emperumAnAr has placed, and worships, thirumazhisai AzhvAr‘s divine and enjoyable feet in his heart; and there are devotees who have surrendered to such emperumAnAr’s  ultimate enjoyable divine feet ; there are gyAnIs who have the mental strength to not depend on anyone other than such devotees; and adiyen am a bakthA for only such gyAnis, says he (amudhanAr).

idam koNda – Present all around the earth
kIrththi – is the excellence
mazhisaikku iRaivan – of thirumazhisaip pirAn;
iNai – having the beauty of togetherness
adippOdhu – is the adorable flower that is his divine feet;
idhayaththu – having such a heart
adangum – (where AzhvAr’s such divine feet has) settled down
irAmAnusan – (is) emperumAnAr;
am – (his) distinguished
pon – and which is available for everyone to surrender to
pAdham – (is his) divine feet;
enRum – at all times
kadam koNdu – (they) think that it (the divine feet) is the goal for their nature
iRainchum thiru – having the wealth of worshiping (such divine feet of emperumAnAr);
kAdhal seyyA – not be friends with
munivarkku anRi – other than those who meditate about the above;
thidam koNda gyAniyarkkE – gyAnis having such extremely determined mind;
adiyEn anbu seyvadhu – adiyen befriend only (such gyAnis)

idam koNda kIrththi – To test the greatness of his excellence of qualities that is spread all over the world, rudhran along with pArvarthi came and discussed in length and went away surprised by seeing his prowess;

and in kanchIpuram when after an old woman served him for some time he gave her youthfulness and loveliness;

(and because of that) and as AzhvAr started leaving from his town due to lowly troubles (from the king) and was going towards the south, as emperumAn who was lying down in that place also started to go with him, AzhvAr requested him (later) to go back to the temple, and emperumAn did what was mentioned, and emperumAn continues to show that he did so by the name of ‘sonna vaNNam seydha perumAL’ (yathOkthakAri – perumAL who did as was mentioned);

and in chOzha maNdalam as he was going through an agrahAram (royal donation of land to brahmins), a few people were reciting vEdhas, and they stopped it when they saw this AzhvAr {since they considered him not eligible to hear the vEdhic sound}, and as AzhvAr moved further they were not able to remember what came next in recitation, and they got surprised and went and called back AzhvAr, and AzhvAr took a black grain and split it to indicate it {next vEdhic word to continue from}, and the brahmins were able to recollect it – and this is a famous incident;

mazhisaikku iRaivan – Being a swAmi (master) of the dhivya dhEsam called thirumazhisai, and being identified by that name; that is, thirumazhisaip pirAn. 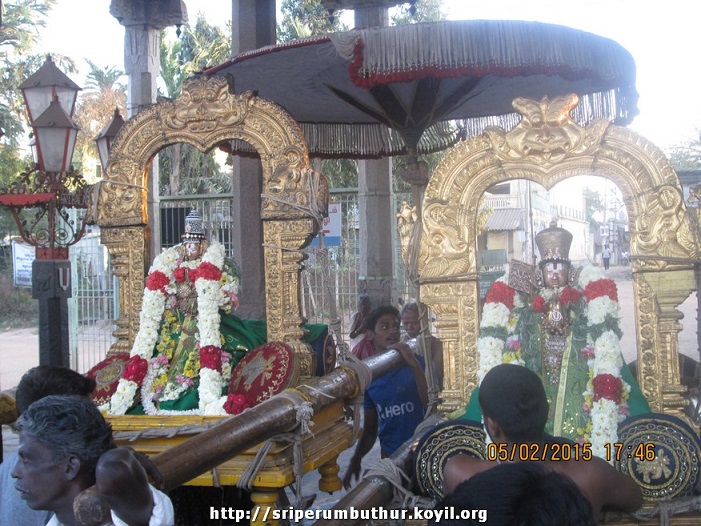 iNai adippOdhu – lotus flowers that is, the two divine feet that are most enjoyable and comforting; pOdhu = padhmam : lotus.

adangum idhayaththu irAmAnusan – In the atom sized mind, the pervasive divine feet could be fit in – emperumAnAr having such a region of heart {large heart}.

This is a famous incident: One day, azhagiya maNavALan (srI ranganAtha) on a vAhanam came near emperumAnAr’s Mutt, emperumAnAr came out and fell on His feet and went back in to the Mutt; he saw that vaduga nambi did not come out and do the same but stayed inside; and asked, “Why did you not come out to worship namperumAL?”; and he replied, “If I came out to worship dhEvarIr’s perumAL, then the preparation of milk for my perumAL would be affected, isn’t it?”.

Due to the trouble of krimi kaNda chOzhan, emperumAnAr went to mEl nAdu (thirunArAyaNapuram / mElkote); AzhvAn went to that fellow’s assembly and won the kudhrushtis (who misinterpret vEdhas), and returned to kOyil (srIrangam) and was living there – during that time one day as he went to visit periya perumAL, the king’s men policing the entrance to the temple saw him and informed him about king’s order of ‘do not allow anyone inside the temple who is having the connection of rAmAnujar’, and some others of them said, ‘he (AzhvAn) is a person of higher knowledge/qualities, let him in’; AzhvAn listened to their conversation, felt terrible about himself, and retreated, and said the knowledge and darshan of emperumAn outside of relationship with emperumAnAr is not for us; and so after that he did not go back to the divine feet of periya perumAL until emperumAnAr returned to kOyil; this is also well known.

(I am subservient) to such strong willed and noble people.

Now, are there anyone in parama padham who have such clear knowledge like him? Even though the AthmAs there have got clear knowledge, they did not get such gyAnam from out of this world that creates darkness in mind. So since even while living in this world AzhvAr got such knowledge, so how can others there be equal to him?

How about emperumAn who is the lord of both the worlds? Does his knowledge equal that of this AzhvAr? No, because since there is no one who can protect Him, he cannot fully understand the meaning of this knowledge.

So, only this AzhvAr‘s fame (of being subservient) is spread in all the worlds.

idam – place of stay – In thiruvekkA, emperumAn stayed in the place shown by AzhvAr. Such fame.

idam koNda kIrththi – can be attributed to thirumazhisai; when dhEvas wanted to know a best place where they could go and do noble deeds, the scale tipped to the side of thirumazhisai with all other places kept on the other plate of the scale.

am poR pAdham – pon : gold.  A golden vessel would stay usable as is even if any kind of people touch it; similarly emperumAnAr‘s divine feet can be reached by anyone. It is sarva samAshraNIyam.

iRainjum thiru – seeking, wealth;  seeking (emperumAnAr‘s divine feet) itself is the wealth; even though seeking emperumAn is also considered wealth, as said in ‘gajAntham aishvaryam‘ (pinnacle of wealth is maintaining and feeding an elephant), pinnacle of wealth here is going up to seeking the AchAryan.

In the tenth pAsuram – When asked “What if you tried hard to forget him?” AzhwAr replies “How can I forget the one who watchfully glances at me always and resides in me eternally to ensure that I don’t forget him?”

Subsequently, AzhwAr says “When he is trying hard to ensure that I don’t forget him, how can I forget him?”.

In tenth pAsuram – AzhwAr says “When he is making efforts to ensure that I don’t forget him, how can I forget him?”.

(To bless)
sem – reddish
thAmarai – Like a lotus
kaNNodu – with the eye(s)
maRappaRa – ensuring that forgetfulness does not occur
en uLLE – inside my heart
manninAn thannai – one who arrived to stay eternally
en maNiyai – the most easily approachable emperumAn who can be tied in a cloth like a precious gem and enjoyed
ini – now on
yAn – I
maRappanO – how to forget?

When I don’t know about forgetfulness and remembrance, emperumAn, after blessing the knowledge about him, considering that “AzhwAr may forget about this”, with his merciful reddish lotus-like eyes, entered my heart to stay there eternally to ensure that I never forget him. How can I forget such emperumAn who is like a precious gem which can be enjoyed fully?[he is so simple that he places himself under the full control of his devotees for their enjoyment]