In the earlier pasuram of “thappil guruvarulAl”, sVami aruLALa perumAL emberumAnAr talked about how those who had understood the purport of “sharanAgathi” that was told to them by their achAryan. He said that these people are sure to reach paramapadham. In the next pAsuram of “neRi aRiyAdhArum”, he talked about those who did not understand the meaning of sharanAgathi through their achAryan, those who do not have any belief in sharanAgathi as preached by Lord Krishna HIMSELF. He concluded that these two sets of people will never attain paramapdham. In this pAsuram, some truths about sharanAgathi are being dealt. sharanAgathi is nothing but surrendering unto the lotus feet of sriman nArAyaNan and saying “YOUR lotus feet is my sole refuge. I do not have no other go anywhere else”. Please do recollect the meanings of sharanAgathi as revealed in 23rd pasuram (Oozhi vinai kuRumbar). After having surrendered unto the lotus feet of sriman nArAyaNan, if one has wavering thoughts in his or her mind as to whether just falling at the lotus feet would be enough to get moksham and as a result perform some good deeds on his own effort, then sriman nArAyaNan would not honor the sharanAgathi that he did ealier. HE will definitely make that sharanAgathi go futile. This wonderful point of sharanAgathi is what is being explored in this pAsuram. 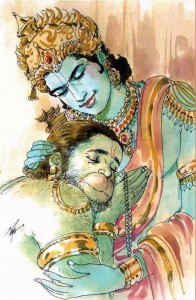 sharanAgathi: sharanAgathi (total surrender) that is being done at the lotus feet of sriman nArAyaNan. One of the salient points of it are that

maRROr sAdhanathai: if a person indulge himself in other activities after losing confidence in his sharanAgathi

paRRil: and if he considers it as an action that would yield good karma

aRanAgAdhu: then, the surrender (sharanAgathi) that this person did earlier, would not rescue him rather would make him and his sharanAgathi act, a failure

anjanai than sEyai: This is similar to how, hanuman, who is the son of anjanA devi

kattiyadhu: and was being tied by a weapon called brahmAsthram by the demon indhirajit (son of rAvana).

Arpadhan mun: that made the brahmAsthram to untie itself at the very moment

vitta padai pOl: Similarly, like the brahmAstharam that relieved hanuman

vidum: sharanAgathi would not come to a person’s rescue, rather fail him completely

sharanAgathi: In order to reach sriman nArAyanan, shAsthrAs have prescribed a lot of good ways and deeds. Amongst these, sharanAgathi is the most right way. The reason is that other ways / karmas get created only when somebody does it in the first place. If a person does not do those karmAs, that way simply does not exist for him. sharanAgathi is unlike other good ways, in that it does not exist at one point of time and do not exist at another point of time. sharanAgathi always exists forever and ready to be followed by whoever wants to follow that path. shranAgathi or the path of surrendering is nothing but sriman nArAyanan HIMSELF. HE verily manifests as this great path called “total surrender”.  HE is someone that is characterized by infinite cognizance, ability to execute whatever HE thinks. This particular feature is not a defining characteristic in other ways (karmAs). Since this sharnAgathi is defined by infinite good deeds / karmas (also known as punniyam), this is known as “shAsthram”. To those who fall at the lotus feet of sriman nArAyaNan (who is also known verily as sharanAgathi), HE serves as good deeds and blesses them. Hence, sharanAgathi is nothing but falling unto sriman nArAyaNan’s lotus feet and saying “YOU are my only protection. I do not have any one or any other place to go”. For this way called “sharanAgathi”, the most important and most crucial thing needed is complete faith that has appellations like “mahA visvAsam” or “adhyAvasAyam” as per shAsthrAs. If one were to lose this complete faith, then sriman nArAyaNan, a.k.a “sharanAgathi” would never yield any positive results. In addition to it, the person who surrenders should never have an iota of thought within himself that it was he who did the sharanAgathi. He should never have the “ahankAram” (characterized by I, me etc) and mamakAram (mine). He should be as a person who has no other place to go apart from sriman nArAyaNan’s lotus feet. Such a person is a person who has the requirement to do sharanAgathi. This thought is being reflected by AzhvAr’s “pugal onRilA adiyEn”. If a person were to hate this materialistic life and absolutely yearn to reach the lotus feet of the LORD immediately, HE would make sure that the person reaches HIM instantly. This has been explained in the literature about sharanAgathi.

maRROr sAdhanathai paRRil: One should know the meaning and complete purport of sharanAgathi. After surrendering to the lotus feet of sriman nArAyaNan, one should not don’t himself about this path called “sharanAgathi” and start doing things on his own as a secondary act of saving himself. If for some reason he does that, then sharanAgathi would never stand as the refuge for that person. The sharanAgathi that he did, will not come to his help, rather leave him forever. Hence, it behooves a person to hold on to his faith with utmost steadfastness and not doubt the sharanAgathi and start doing things on his own as an act of saving himself. If he does, then sharanAgathi will fail miserably. This fact is being illustrated by means of a story

muRan azhiya kattiyadhu: muRan refers to strength or might/valor and thus this phrase would mean “to nullify that strength by means of brahmAsthram

vErOr kayiRu kondu Arpadhan mun: The moment when one loses hopes on brahmAsthram and starts to use other petty ropes to tie hanuman (Arthal would mean the act of tying)

vitta padai pOl: sharanAgathi would fail just like how brahmAsthram would fail if it used in conjunction with other petty ropes

Remarks: In srirAmayaNam, when hanuman went as messenger to sri lankA, he destroyed the entire ashOka vanam. Indhirajith, who was the son of the king rAvana, fought with hanuman and tied him using brahmAsthram. However, after recollecting the wrath that hanuman incurred on sri lankA and his rakshasas, indhirajith tried to tie him for the second time using all petty ropes possible thinking that it would bolster brahmAsthram. He thought to himself, “would this brahmAsthram suffice to tie a warrior like hanuman” and doubted the power of brahmAsthram. Hence, he went ahead and brought all petty ropes and tied hanuman one more time. Looking at this foolish act of indhirajith, brahmAsthram untied itself and relieved hanuman of all the knots. Similarly, if one were to indulge in other acts apart from sharanAgathi, then sharanAgathi would not yield any result and would leave the person forever in unending trouble. While sharanAgathi is compared to brahmAsAsthram, other good deeds and karmAs that a person does are compared to these petty ropes.