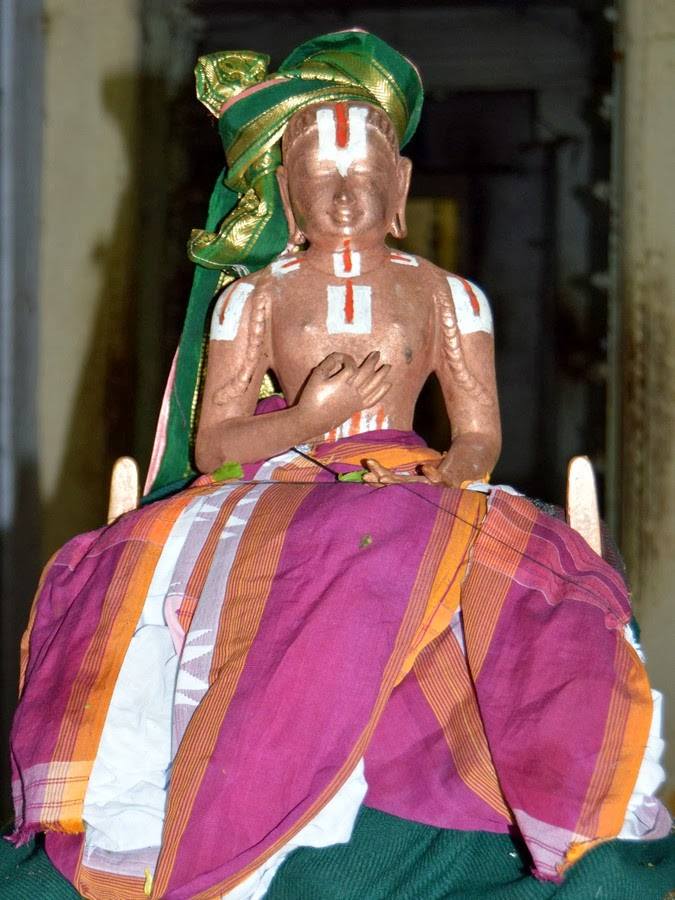 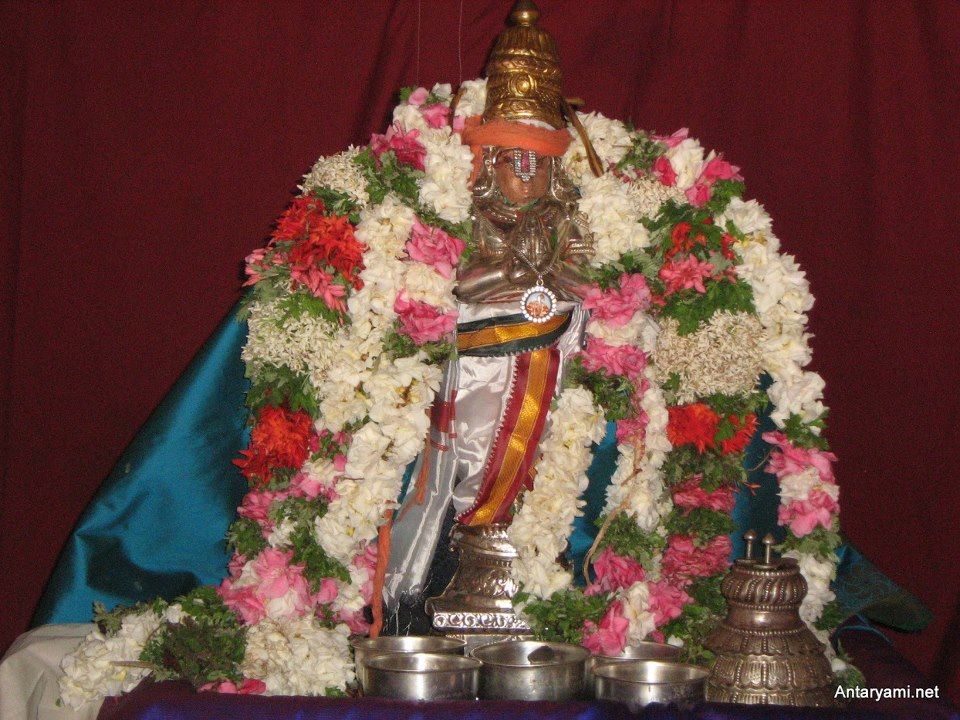 Material aspects are lowly due to their insignificant and temporary nature. Though there is boundless joy in AthmAnubhavam (enjoying oneself), in comparison with bhagavAn‘s auspicious qualities, it is still insignificant and thus this AthmAnubhavam is mediocre. Enjoying bhagavAn‘s boundless auspicious qualities and serving him – that too in krishNAvathAram and that too his life and pastimes at vraja bhUmi where he stole butter, being caught by yasOdhA red-handed and punished by her, etc., are the top most goal.

This principle is observed in personalities from srI rAmAyaNam. srI rAma was focussed on sAmAnya dharmam (common sAsthram) which focusses on following the orders of parents, teacher, etc. iLaiya perumAL (lakshmaNa) was focussed on serving perumAL (srI rAma). bharathAzhwAn was focussed on following the heart of perumAL (srI rAma) – i.e., unlike going along with srI rAma and serving him in the forest like lakshmaNa did, he stayed back and fully followed the orders of srI rAma. sathrugnAzhwAn was fully focussed on serving bharathAzhwAn (who was a dear devotee of srI rAma) even at the cost of ignoring srI rAma.

bhAgavathas are the ultimate goal since they first plant the seed of taste towards bhagavAn into oneself, (by) being a friend with whom one can have discussions about bhagavAn and nourish/nurture the kainkaryam done by oneself. Thus, madhurakavi AzhwAr is fully holding on to nammAzhwAr who has done all these favours for him.

periyavAchchAn piLLai‘s introduction
In addition to the principles explained by nampiLLai in his introduction, periyavAchchAn piLLai highlights some important aspects beautifully. He highlights the importance of following the heart of AchArya by giving a couple of examples. After learning all the important principles from srI bhIshma, yudhishtra asked him “What is the top most dharma to follow?”. srI bhIshma replied what is most dear to him (i.e., about srI krishNa who was standing right amidst them) and yudhishtra happily accepted that. Similarly some one asked thripurA dhEviyAr (a local queen and a disciple of srI rAmAnuja) “Did you accept srIman nArAyaNan as the total refuge due to many pramANams that are available in sAsthram?”. She confidently replied “Not at all. Had srI rAmAnuja accepted the dhEvathA of IsAnya direction (the direction of rudhran), we would have also accepted that dhEvathA as our refuge” (knowing well that srI rAmAnuja is the top-most authority of sAsthram). Likewise, madhurakavi AzhwAr is following the heart of nammAzhwAr whose most cherished desire is to be with thadhIya sEshathvam (being surrendered to bhAgavathas who are surrendered to bhagavAn).

The difference between this prabandham and others is explained by nAyanAr beautifully. vEdham explains different aspects for different kinds of people based on their guNam as mentioned in bhagavath gIthA “thraiguNya vishayA vEdhA:“. vEdham is also explained as endless (huge for us to search and extract the essence). nammAzhwAr‘s thiruvAimozhi explains emperumAn‘s qualities only in 1000 (1102) pAsurams (which is still huge). But this prabandham is very short and crisp and only speaks about the auspicious qualities of nammAzhwAr. thiruvAimozhi is the essence of vEdham. kaNNinuN chiRu thAmbu is the essence of thiruvAimozhi.

nAyanAr then highlights 4 persons who are dear to a mumukshu namely sarvEsvaran (srIman nArAyaNan), srI mahAlakshmi, AchArya and srIvaishNavas. sarvEsvaran helps a jIvAthmA constantly and uplifts him from the miseries of samsAram. srI mahAlakshmi, being the natural mother recommends to emperumAn to accept the jIvAthmA in spite of his sins and also helps improve his kainkaryam even in paramapadham. AchArya explains the glories of emperumAn and thAyAr, personally demonstrates the principles of sAsthram and always looks out for the ultimate well-being of the jIvAthmAs. srIvaishNavas initially trigger the desires towards bhagavAn, help develop the knowledge in bhagavath vishayam, be good companions, nurture the devotion towards one’s AchArya, be the masters, and finally clarify any doubts which occur due to constant relationship with material aspects. These 4 personalities are identified in sruthi (thaithriya upanishadh – sIkshAvalli) as “mAthru dhEvO bhava, pithru dhEvO bhava, AchArya dhEvO bhava, athithi dhEvO bhava“. Here srIvaishNavas are explained as athithi (athithi generally means guest). When an athithi arrives, one should take care of such athithi properly without inquiring their background. Similarly, a srIvaishNava must be taken care of without inquiring about their birth, family background, etc (basic hospitality should first be given). When such srIvaishNavas are not given adequate hospitality, one accumulates sins and also one’s virtues are reduced.

Among these 4 personalities, AchArya is the foremost person to be cared for. That is why madhurakavi AzhwAr who fully understands the glories of AchArya, who fully served nammAzhwAr‘s lotus feet for a lengthy period and became dear to nammAzhwAr, who understands that there is nothing equivalent to favours done by nammAzhwAr, etc., wanting to show his gratitude by singing nammAzhwAr‘s glories, sings this prabandham.
Iswara is difficult to worship. AchArya is easy to worship. nammAzhwAr compiled 4 prabandhams to glorify emperumAn. nammAzhwAr was easily worshippable in just this one small prabandham.