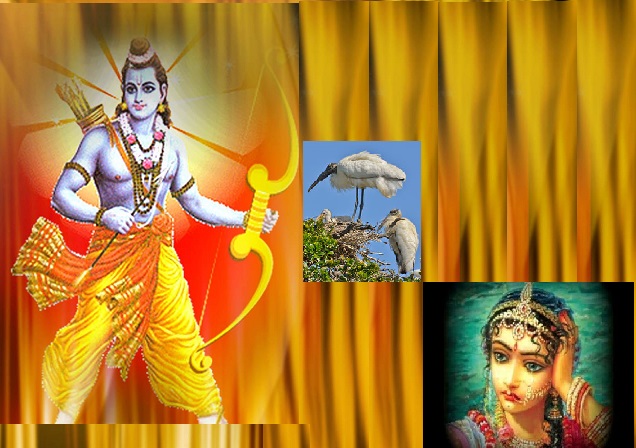 In this pAsuram, mAmunigaL is following AzhwAr’s pAsurams of sending messenger due to suffering in separation and is mercifully explaining it.

How is that done? Without giving up the divine feet of emperumAn, even after AzhwAr performed the unfailing SaraNAgathi (surrender) in four decads viz thiruvAimozhi 5.7 nORRa nOnbu, thiruvAimozhi 5.8 ArAvamadhE, thiruvAimozhi 5.9 mAnE nOkku and thiruvAimozhi 5.10 piRandhavARum, which is like brahmAsthram, since he did not fulfil AzhwAr’s desire for the sake of protecting the universe (by making AzhwAr remain here and sing thiruvAimozhi), AzhwAr became very weakened due to not attaining his desire, and thought “As he has vowed to protect the suffering ones, he will certainly come and help us, if he were informed about our plight; he has become immersed in the opulence in thiruvaNvaNdUr and has forgotten us”. With the help of gataka (connector, messenger), AzhwAr is informing his situation to the divine son of dhaSaratha, who said in SrI rAmAyaNam yudhdha kANdam 8.3 ‘nathyajEyam‘ (I will not abandon even if he has faults). He does that in the mood of a nAyaki (heroine) who cannot wait until her nAyaka (hero) arrives at her, and who sends a messenger to him. mAmunigaL mercifully explains this principle explained in “vaigal pUngazhivAy” starting with “vaigal thiruvaNvaNdUr“.

Oh residents of the world! Saying “Oh flock of birds! Inform my state to dhaSaratha chakravarthi’s son who is mercifully present in thiruvaNvaNdUr always”, AzhwAr is sending birds as messengers with great love. You worship such AzhwAr’s divine feet.

Twenty ninth pAsuram. He tells his heart to keep thinking about the glory of this great day of chiththirai thiruvAdhirai.

Oh heart! Keep analysing the greatness of this chiththirai thiruvAdhirai day, when yathirAja (rAmAnujar) incarnated in this world, and experience the joy.

Thirtieth pAsuram. Until now, mAmunigaL had greatly celebrated the days of incarnation of the AzhwArs. Starting with this pAsuram, over the next four pAsurams, he celebrates the places where they had incarnated. In this pAsuram, he mercifully speaks about the places where the first three AzhwArs, thirumangai AzhwAr and thiruppANAzhwAr had incarnated. SrI ayOdhyA and SrI mathurA are the divine abodes where emperumAn had incarnated [as SrI rAma and SrI krishNa, respectively]. The places where AzhwArs incarnated have a greatness which is more than that of the above mentioned divine abodes since we knew of emperumAn only after the incarnation of AzhwArs.

mudhal AzhwArs, viz. poygaiyAzhwAr, bhUdhaththAzhwAr and pEyAzhwAr have innumerable auspicious qualities. The places where they incarnated are the opulent kAnchIpuram (thiruvehkA), thirukkadanmallai (present day mahAbalipuram) and thirumayilai, respectively. thirukkuRaiyalUr, which is abundant with water from the river maNNi, is the place where the eminent thirumangai AzhwAr incarnated. uRaiyUr, also known as thirukkOzhi, which has high stature, is the place where thiruppANAzhwAr incarnated.