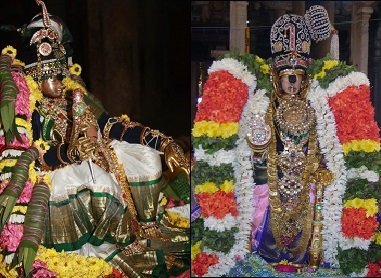 nammAzhwAr having reached the peak state of sorrow in separation from emperumAn, acquired feminine mood. As parAnguSa nAyaki, due to great love towards SrIranganAtha, reached a state where she could not longer speak, further assumed the state of parAnguSa nAyaki’s divine mother. The mother took her daughter and placed her in between the divine pillars in front of periya perumAL, informed her pathetic state to him and prayed to him saying “You should protect her in all ways”.

First pAsuram. parAnguSa nAyaki‘s mother informs her daughter’s unconscious state to periya perumAL and asks him “What are you going to do to her?”

My daughter’s eyes do not even realise to sleep in night and day; she is removing the tears from her eyes with her hands; saying Sanka and chakra, she would perform anjali which she would do upon his arrival; saying “lotus like eye”, she would become tired; she would say “how will I sustain without you”; she would search the ground with her hand and will remain in an inactive state; oh one who is residing in kOyil (SrIrangam) which is having water bodies in which youthful, reddish fishes jump around! What are you planning to do for this girl who is having these amazing emotions?  Implies “are you planning to eliminate the sorrow or increase the same?”

Second pAsuram. parAnguSa nAyaki’s mother says “While you are the protector in all manners, where is her state leading to?”.

She says “Oh one who is having very enjoyable eyes which are making me exist for you only! What are you thinking to do?” With tearful eyes, she would remain put; she says “Oh one who resides in kOyil (SrIrangam) which is having water with rising waves! what shall I do?” She will repeatedly breathe [heavily] to become hot inwardly and will melt due to that situation; she says that her previous karma is appearing in front of her, considering the karma to be a chEthana due to its act of causing harm; she says “Oh one who is magnanimous like clouds which pour the rain without distinguishing between land and water! Does it match your magnanimity [to not appear in front of me]?” [the mother asks] Oh one who first created, consumed, spat out, measured and accepted the world! How is it going to end for her? Implies “Is she going to be included in the group of those who are protected by you, to end her distress? Or is she going to be pushed out to be kept away?”

Third pAsuram. parAnguSa nAyaki’s mother says “Being the one who has incarnations which are focussed on eliminating the enemies of the devotees, what did you do to her, to have her reach this state? “

My daughter is not having shyness which is her identity, even a little bit; she says “Oh one who is obedient to me like a blue gem which can be placed in the pocket!” She looks up the sky and becomes unconscious; she says “Oh independently valorous person who swallowed the life of the prideful, demoniac persons without any remainder!” She breaks down inside her; she says “Oh one who is difficult to be seen by the eye! kindly be merciful to be seen by me”; she says – did you not incarnate as the divine son of dhaSaratha who manifested himself to those belonging to cities and forests as said in “pumsAm dhrushti chiththApahAriNAm” and “dhadhruSu: vismithAkArA:” respectively and krishNa manifesting your beauty to cowherd girls as said in “thAsAm AvirabhUth“? [mother says] Oh one who is residing in kOyil (SrIrangam) which is having the firm flag on the surrounding fort! What did you do to her to put her in such sorrow?

Fourth pAsuram. parAnguSa nAyaki’s mother requests periya perumAL “What are you mercifully thinking to do for this girl?”

My daughter’s leg and hand remain [unmoved] wherever they were placed; after regaining consciousness, she stands up, walks around and subsequently becomes unconscious; she performs anjali; becoming upset saying “love is difficult to handle”, she loses consciousness; she says “Oh one who is like immeasurable ocean which secures everything inside it! You are being cruel towards me!” She says “oh one who is having the wholesome divine chakra in your right hand!”; She is repeatedly requesting him saying “come here with the divine chakra in your hand” and loses her mind thinking “I lost my nature due to repeatedly calling him, and lost the desire/goal as he did not come”; oh one who is reclining on the beautiful banks of the river, pretending to be a reputed person! What are you thinking in her case? Implies, “Are you thinking to only keep her bewildered? Or are you planning enlighten her?”

Fifth pAsuram. parAnguSa nAyaki’s mother informs the transformations her daughter is going through every moment and says “Would it befit your qualities such as ASritha vAthsalya (motherly affection towards devotees) etc to torment her in this manner?”

You (emperumAn) tore apart the body of hiraNya, the asura in the particular time of sandhyA and being infinitely enjoyable, churned the ocean having waves; oh one who bewildered this girl who has a perfectly fit form and is desiring to unite with you to have external experience of enjoying your divine feet only! She thinks about how you united with her previously, becomes bewildered, regains composure and performs anjali; she calls you saying “Oh one who is residing in kOyil!” and bows her head; remaining there itself, with eyes filled with cool tears, repeatedly saying “come and accept me” she becomes unconscious. Implies that she goes through all kinds of transformations with respect to romantic interactions with emperumAn.

Sixth pAsuram. parAnguSa nAyaki’s mother says “You who are having the necessary weapons to protect your devotees still made my daughter suffer, should tell me what should I do for her”.

Seventh pAsuram. parAnguSa nAyaki’s mother says “My daughter is in anguish speaking about emperumAn’s qualities, such as reclining on the ocean for the protection of his devotees”.

My tender natured daughter who is like a slender creeper says “You created sorrows for those who are not surrendered and joy for the surrendered ones in every place; you stand as the refuge for those who don’t have refuge even for those who did not have attachment like jayantha, to surrender; you are the controller of the wheel of time; you are mercifully resting in the divine milk ocean, like an ocean reclining on another ocean; oh one who appeared as krishNa for the protection [of devotees]! Oh one who is residing in kOyil (SrIrangam) which is surrounded by cool water [kAvEri] having fish in it! Oh one who is like a sacred river ghat for me to immerse into!” She then remains inactive with tears filled in her beautiful, expansive eyes.

Eighth pAsuram. parAnguSa nAyaki’s mother says “How will I remedy the sufferings which keep coming at my daughter?”

My daughter says “he is the head of nithyasUris”; she says “Oh one who performed the super-human task to protect the cows by lifting the hill!” She remains with teary eyes like those who are immersed in devotion; she  performs anjali like a surrendered person; she breathes hot to burn the soul which cannot be burnt; she says “Oh one who is having dark-coloured form which caused anguish!” She rises up to see [him] and remains without blinking; she says “How will I see?” Oh one who is residing in kOyil (SrIrangam) which is surrounded by the beautiful, vast water body! What shall I do to my daughter who is comparable to lakshmi? Can I control her love which causes the suffering? Or can I make you who are not arriving, to arrive? Implies that both are impossible.

Ninth pAsuram. parAnguSa nAyaki’s mother says “I cannot fulfil the desire of my daughter who is captivated by the overwhelming love of you who are the divine consort of lakshmI, bhUdhEvi and nILA dhEvi”.

My daughter says “Oh one who is having the divine chest which is the desirable abode of lakshmi, my lady lord, where she is united with you!” She says “Oh the matching consort of SrI bhUmip pirAtti who you dug out with your divine tusk and accepted as your beloved one!” She says “Oh one who has fixed affection for nappinnaip pirAtti who appeared in a matching clan for you and was accepted by you like finding and keeping a treasure, by embracing the seven bulls  which roared like thunder, causing fear when they were placed as a challenge!” Oh one who acknowledged the well protected SrIranga kshEthram as your abode! I am unaware of the means to end her suffering.
Tenth pAsuram. As sarvESvaran who is the antharAthmA (in-dwelling super soul) of those [dhEvathAs] who consider themselves to be the lord, knowing her suffering/urge, out of his great simplicity etc, magnanimity and his physical beauty, grants her the external experience while in separation, and that leads to parAnguSa nAyaki acquiring faith; seeing this her mother speaks in a satisfied manner.

Eleventh pAsuram. AzhwAr says “Those who practice this decad will not be tormented like me and will reach paramapadham [spiritual realm] where they will remain with infinite bliss, surrounded by nithyasUris”.

The divine thAmirabharaNi river is filled with abundant, pure water which is having the complexion of a rich cloth; infinitely opulent AzhwArthirunagari is on the banks of this river and is surrounded by gardens which have the greatness of having honey, flowers etc; nammAzhwAr, the leader of such AzhwArthirunagari, got uplifted by attaining the divine feet of periya perumAL who has the qualities of generous cloud; he mercifully spoke this decad in the thousand pAsurams as garlands of words, on the divine feet of infinitely beautiful, cloud-like periya perumAL; one who can practice this decad with the true emotions will remain in the infinite ocean of bliss in the paramapadham which is dark-bluish coloured, to be surrounded by the nithyasUris.